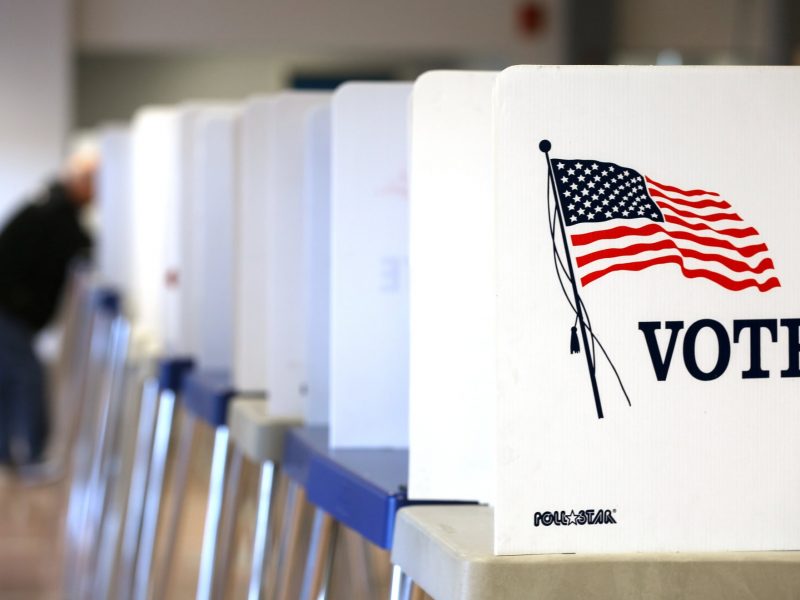 Vote! As Jews, We are ‘Commanded’ to Get Civically Engaged

As we approach the Ohio primary in March, and look ahead to general elections in November, our rabbinic fellow from Hebrew Union College-Jewish Institute of Religion, Alicia Harris, offers a reflection on the importance of voting—and why civic engagement is a uniquely Jewish value and tradition. –Jackie

The first thing I did when I turned 18 was register to vote. Actually, I registered at 17 because in Ohio if a person will be 18 by the general election, they are eligible to cast a provisional ballot in the primary. Election Day has always been a celebrated holiday in my house. I have so many memories of going to vote with my parents, walking into the booth, and getting to pull the lever on the machine. In the years since I have been eligible to vote, I’ve never missed an election. And since I started rabbinical school, I wear my kippah into my polling place and say a blessing before I vote because exercising my right to influence democracy feels like one of the most Jewish things I can do.

For centuries, Jews were not allowed to participate in local government because countries considered Jews more loyal to Judaism and their communities than to the countries in which they resided. The very few Jews who were allowed to participate were given special privilege to collect taxes—a job that all other religions disparaged and that led to many antisemitic stereotypes that we still see manifested today. In spite of this difficult history, Jews have remained dedicated to improving the governments in places they live because democracy and involvement in government are fundamental ideals that are explicit in our holiest works.

Engagement in government and the democratic process is a value that Jews have held dear since the days of Deuteronomy, where in chapter 16, verse 18, the people are instructed to “appoint magistrates and officials for all your tribes, in all of the places that God is giving you in which you dwell, and they shall govern the people with justice.” The Torah portion in which we find this passage, aptly named shoftim (judges or laws), is full of the ways in which Jews are expected to behave in society and in relationship to others as well as the law. What is most important is that people are expected to be involved in each other’s lives in society. The Jewish imperative to vote stems from this idea: that all Jews are responsible for the time in which they live and the place in which they dwell, along with the people who reside there. We are commanded to participate in this democratic process because it is an imperative function of a just society.

In Jeremiah 29:5-7, we read how the people should relate to their new exiled circumstances. They are told to build houses, plant gardens, have children, set down roots in their community, and especially to participate in the government. Though Israel may be their home, God is essentially saying that they must participate in day-to-day life, including government—that they must “seek the welfare of the land in which they dwell.” The welfare of our country is a value that all Jews hold, regardless of their affiliation.

We learn in Exodus 23:2, “do not follow the majority if they are doing evil, do not bear witness or stand by if the majority is distorting justice.” It is our responsibility to do everything we can to ensure justice and prosperity for all inhabitants of the United States, thus if our neighbors are suffering, we are not upholding our obligation to “seek the welfare” of our nation. Voting is one of the ways in which we can directly fulfill this task, by choosing elected leaders who work for the betterment of all people. Jews were given the opportunity to settle and establish ourselves in America, so we must maintain our long-established ideals about government and justice while we vote.

Here we are, already in 2020, and the primaries are quickly approaching. This election cycle feels like it started the day after the election in 2016, and we have been inundated with information nonstop since then. If you’re feeling overwhelmed by all of this, like I am, start having conversations. Start with your friends and neighbors, start in your synagogues and JCCs and remind them what a privilege it is to vote and how lucky we are to have the opportunity to be involved in our political process. Unlike many places, we live in a society where we get a voice.

Beyond having these challenging conversations, there are other ways that Jews can be an integral part of civic life. First and foremost is to ensure that we are registered to vote, that our registration is updated, and that those eligible voters with whom we live are also ready for the next election. There have been efforts in Ohio to purge voters from the rolls, so check your registration, even if you think you are already registered. The primary in Ohio is on March 17, and the deadline to register to vote is February 18. You do not need an Ohio driver’s license to vote in Ohio, as long as you have been a resident for 30 days. Also, you can vote early if you are unable to make it to the polls on Election Day. Visit voteohio.gov for registration, voting options, sample ballots, and more.

After fulfilling our personal civic responsibility, we can then get involved in voter engagement efforts with Ohio Votes and assist others such as working the polls, monitoring legal disputes that may arise at polling locations, organizing a voter drive, or volunteering for your favorite candidate.

Additionally, be sure to fill out the 2020 Census when you receive it, as it plays a huge part in determining representation and where tax dollars are spent. We are a people for whom counting as a member of society is crucial; check out the entire book of Numbers in which family lines are enumerated. This long list of names and generational placement can seem excessive, but the lesson it teaches is how important each person is in forming and upholding a society. The book of Numbers is a biblical census, and the current day census offers us a chance to be counted, to be members of our society in much the same way as our ancestors. If you have time or need a job, you can even work for the Census Bureau and help all Greater Cincinnatians get counted.

I am not naive enough to think that voting will fix everything. I understand that many people don’t vote because they feel their vote doesn’t matter, that the system is rigged, or that the political system is too broken to be fixed by a change in leadership. However, I am reminded of the statement by Rabbi Tarfon, a third generation rabbinic sage who was active during the Mishnaic period in 10-220 CE. In Pierkei Avot, a collection of ethical teachings from the Mishnah, Rabbi Tarfon said, “It is not upon you to finish the work, but you are not free to desist from it.” This is the most important lesson in these trying times: we cannot give up. We must have these tough conversations, and Jews must remain civically engaged. Our ancestors came to the United States for religious freedom, and part of upholding that freedom is ensuring that our elected representatives work for our best interest and fight for our ability to live as Jews in this country.

“This is the most important lesson in these trying times: we cannot give up. We must have these tough conversations, and Jews must remain civically engaged.” –Alicia Harris