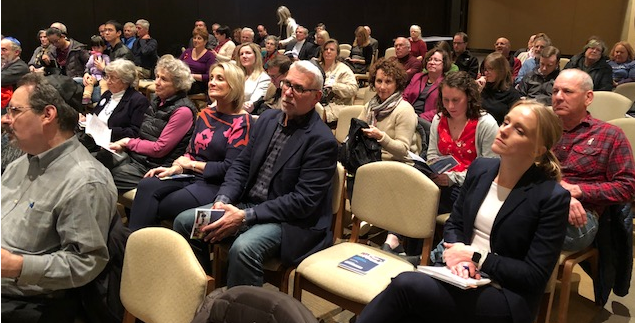 The JCRC and AJC Cincinnati held a Community Immigration Forum in March. More than a hundred people turned out to hear immigration experts and attorneys, as well as a DACA recipient, speak about immigration reform in the United States.
March 23, 2018 | 0 Comments
Tweet
Share
Share
0 Shares

The Jewish Community Relations Council, in partnership with AJC Cincinnati, hosted a community-wide immigration forum in March. Almost a hundred people turned out to hear a lively discussion on immigration policy, particularly as it applies to Dreamers. Keynote speaker Naomi Steinberg, Senior Director of Policy and Advocacy for HIAS, spoke about refugees and their efforts to rebuild their lives. Then moderator Hagit Limor led a discussion by a panel of immigration experts and attorneys and a DACA recipient. As an introduction, JCRC President Walter Spiegel and AJC Cincinnati President Sandy Kaltman framed the discussion with their own immigrant stories, versions of an immigration story all American Jews share. Their remarks are shared below. –Jackie

Kaltman: We’re here tonight to discuss an issue that’s important to all of us because we all have the common history of being immigrants. In my case, it was my parents who came to this country. They were born in Lodz, Poland, and their lives changed forever when the Nazis invaded Poland in 1939. They endured imprisonment in the Lodz ghetto and in the Auschwitz and Dachau concentration camps. Reuniting and marrying after the war, they arrived through Ellis Island in 1950 and lived in Cincinnati as productive citizens the rest of their lives.

Spiegel: Like Sandy, I am also a child of immigrants. My parents were born in Nuremberg, Germany, ground zero for the emerging Nazi party. As they came of age as teenagers in the 1930s, their basic civil and human rights, and ultimately their citizenship and their dignity, were step by step stripped from them. In 1938 they were each fortunate to be able to emigrate to the United States, thereby avoiding the horrific fate of so many other Jews. They met in the United States, married, and settled in Atlanta to pursue their American dream.

Kaltman: Our family histories of fleeing a childhood home to escape oppression and discrimination and to seek a better life elsewhere – while perhaps more recent than some – are not unusual in the Jewish world. Throughout our history, we as Jews have been forced to leave our homes in order to save our lives and preserve our heritage – first from slavery and then later from inquisitions, pogroms, and ultimately genocide. It is perhaps not surprising, then, that we Jews are particularly sensitive to the plight of immigrants and refugees. After all, those of us sitting here this evening are not far removed from being immigrants and refugees ourselves.

Spiegel: Our concern with the plight of immigrants originates in the Bible, which repeatedly commands us not to oppress the stranger in our midst. As stated in the Book of Exodus: “You shall not oppress a stranger, for you know the feelings of the stranger, having yourselves been strangers in the land of Egypt.” But our Jewish experience is not completely unique. It is in fact similar to those of many other ethnic and religious groups who left the countries of their birth to escape from persecution, discrimination or violence, or simply to find a better life in America.

Kaltman: Yet as we stand here this evening, we also acknowledge the complexity of the issue of immigration reform in the United States today. How then do we apply our Jewish values and our American values to complicated and challenging issues, such as the presence of millions of undocumented immigrants, legitimate security concerns, economic refugees, and sanctuary cities? We are fortunate to have with us this evening a group of experts who will discuss these and other immigration-related topics. Our hope is that you will come away from this evening with a better understanding of both the complexities and the human side of immigration and that you will feel inspired to become more educated and engaged on this issue.

“Throughout our history, we as Jews have been forced to leave our homes in order to save our lives and preserve our heritage – first from slavery and then later from inquisitions, pogroms, and ultimately genocide.” –Sandy Kaltman