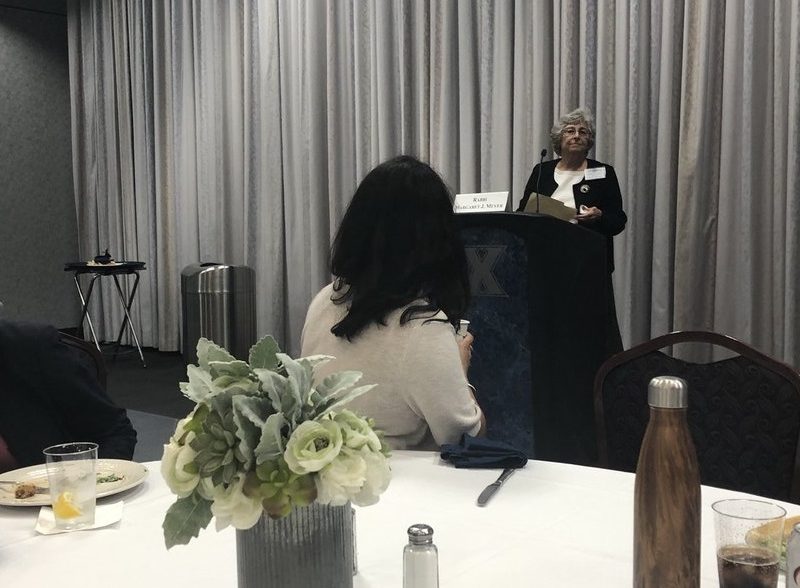 Working Together in the Faith Communities

I was inspired by JCRC Board Member Rabbi Margie Meyer’s keynote speech at the Center for Migration Studies of New York conference at Xavier University in July. She hailed the success of the MARCC ID card, which has helped more than 2,000 documented and undocumented immigrants obtain an official identification card, recognized by the City of Cincinnati, Cincinnati Police, the Hamilton County Libraries, hospital emergency rooms, and others. Her comments are reprinted below. — Jackie


I’ve been asked to speak about my volunteer, interfaith work with immigrants here in Cincinnati. I ask you to picture the following scene: It is 8:00 a.m. on a hot, humid summer morning just two years ago. I arrived at Woodward High School to help with the first ID card registration in Cincinnati. Although the doors were to open only at 9, we had been warned that some folks might arrive earlier. The sight that greeted my eyes is burned into my memory forever. There, winding out from the school entrance through the parking lot and around the building, were hundreds of people, families with small children, mothers with nursing babies, older adults who needed help from their teenage grandchildren, men of all ages. All were standing, quietly, patiently, waiting for the doors to open and an opportunity to finally be recognized in an official manner, as a person. As we later found out, some had been waiting since 10 o’clock the night before.

Other organizing workers came and stood with me: Ted Bergh, the head of Catholic Charities; Catholic Charities staff members and volunteers from various religious and ethnic groups; and Officer Longworth, the Cincinnati Police officer assigned to our detail. We stood and gaped, teary eyed, speechless. We had known that many would want this ID card; we had no idea how many. We went to work quickly, and that day we were able to register nearly 500 applicants. Even so, some had to be turned away until the next registration date.

Although we felt validated for all the work that went into preparing for that morning, we knew we had just begun. Given the nature of this conference, today I would like to explain how the ID Card came to be, as well as other activities in our community that help immigrants here in the Cincinnati area, and just how important it is that various faith and ethnic groups work together on these projects.

It all began four years ago. Cincinnati Mayor John Cranley wanted to create an Identification Card to be used by anyone, including the undocumented, that would be recognized by the city. A shrewd politician, Mayor Cranley knew it might not be politically popular to try to create an official city card, so he reached out to the religious community. Archbishop Schnurr of the Archdiocese of Cincinnati had a better idea: let’s involve the entire religious community in this; let’s make it a community-wide effort. So he contacted Margaret Fox, the Executive Director of the Metropolitan Area Religious Coalition of Cincinnati (MARCC), a coalition of 17 major denominations that works together to effect change through support of local legislation, working with city government and local organizations for the betterment of our community. MARCC has been involved in community action for fifty years, so it was a natural choice.

Working closely with Catholic Charities, MARCC organized and created the ID card. It wasn’t easy. It involved convincing all the religious organizations involved, meetings with other involved groups in the community, lobbying Cincinnati City Council members, working with the city solicitor and city manager, and eventually—after a great deal of bureaucracy, set-backs and negotiations—receiving approval from City Council in the form of a resolution.

In the past two years, about 2,000 local citizens—new immigrants, both documented and undocumented, returning citizens from incarceration, and anyone who might need or want such identification—have benefited from the card. It is recognized for identification purposes by the Cincinnati Police Department and city services, by the Hamilton County Library system, hospital emergency rooms, and other services. Slowly, again after much effort and many negotiations, it is being accepted by other communities, even beyond Hamilton County. Catholic Charities administers it along with MARCC and other volunteers, and it is an outstanding example of how the community—especially the religious community—can work together to create a more just society.

The ID card is just the most visible of the many ways the interfaith community interacts to help those new to our nation. Right now during the summer, churches and synagogues are working together to sponsor a day camp for children of new immigrants, giving them some of the same experiences most of our children enjoy during the hiatus from school.

Volunteers from various member organizations within the religious community join with Catholic Charities, the organization contracted with the US Government for refugee resettlement in Southwest Ohio, to welcome new refugees, drive them to the doctor and other appointments, help furnish apartments for them, in order to help these new residents feel more comfortable and welcomed in their new communities.

When we greet the new stranger, smile and help him or her, when we can look them in the eye, we no longer see them as strangers, but ordinary people just like us, struggling human beings who want what we all want: a home in a land where one is free to work, raise a family, and contribute to the community around them.

This has impacted me most strongly in another volunteer capacity in which I have been privileged to participate. As a volunteer teacher of English to new immigrants—again, a situation where I, a rabbi, work side-by-side with Christians, other Jews, and Muslims—I have met and taught immigrants from countries such as Bhutan, Eritrea, Mexico, Peru, Libya, and Congo. Their experiences, fortitude, and courage in attempting to reach our country, has more than once left me not only astounded and ashamed of what we take for granted every day, but occasionally finding myself with difficulty holding back tears in order that I might continue to teach. Yet it is their lessons to me that remain.

I recall the man who almost never missed a class, with only one leg and one good eye, struggling daily to learn English so that he might become a welder here in Cincinnati. He was a master welder in his home country in Africa, “before the accident,” he told us. Before arriving in Cincinnati, he spent years in camps as a refugee, sometimes close to starvation, sometimes avoiding warring factions, being vetted over and over again, sometimes with family, sometimes alone. I think also of the young Bhutanese couple who, after years in refugee camps, hopes to make a new life here, begin a family, and eventually own their own home.

And I am changed forever by one class I will never forget. The lesson plan called for me to ask the students, “What makes you happy?” and to have them discuss their answers.

Think for a minute, what makes you happy?

I thought it would have been answers like: having a day off, playing with my children, eating a favorite food. And some answers were like that. Then a soft-spoken woman, at first reluctant to answer, said, “I was happy when I saw my husband.” Not quite sure what she meant, and attempting to have her answer the question in more complete detail – this was an English class, after all – I asked her to continue. They were separated after they fled the violence in their country, she explained. She was placed in a refugee camp with her small child; her husband disappeared, kidnapped by opposition fighters, she had no idea where. Six years later, he was released into the same camp where she was. I cannot imagine what she went though during that time, what she thought, or whether she ever gave up on the possibility of his return. Eventually they were able to come to the US, and are now settled in Cincinnati as refugees.

“I was happy when I saw my husband.” I still shudder when remember her saying those words in her quiet, accented English. And I shudder at the fear that others like her will not be able to make the journey to our land because of the horribly stringent new immigration quotas.

As those of you who are here today are well aware, there are many different kinds of immigration, and many different kinds of immigrants. Our nation was built on the ideal of immigrating here to find a better life. My grandparents came from other lands for a better life for their children, and my husband and his family fled Nazi Germany to escape annihilation and rebuild their lives here. You all have your own stories of your immigrant ancestors, some generations ago, some not so long ago. It is up to us, those who have benefitted from a nation that was willing to open its gates to our families, to keep those gates open and aid those who are still coming in any way we can.

I truly believe that the religious communities working together in interfaith organizations, churches, synagogues, and mosques, helping not just to resettle newcomers but to help them adjust, to aid in their studies, their pursuit of career, their becoming part of our nation, do make a positive difference. At this time in our nation’s history, especially these days, we need to continue to work together, to keep the fabric of our nation together and the ideals we hold alive.

The Jewish Community Relations Council is one of more than fifty programs and agencies funded by the Jewish Federation of Cincinnati.

The sight that greeted my eyes is burned into my memory forever. There, winding out from the school entrance through the parking lot and around the building, were hundreds of people, families with small children, mothers with nursing babies, older adults who needed help from their teenage grandchildren, men of all ages.  — Rabbi Margie Meyer