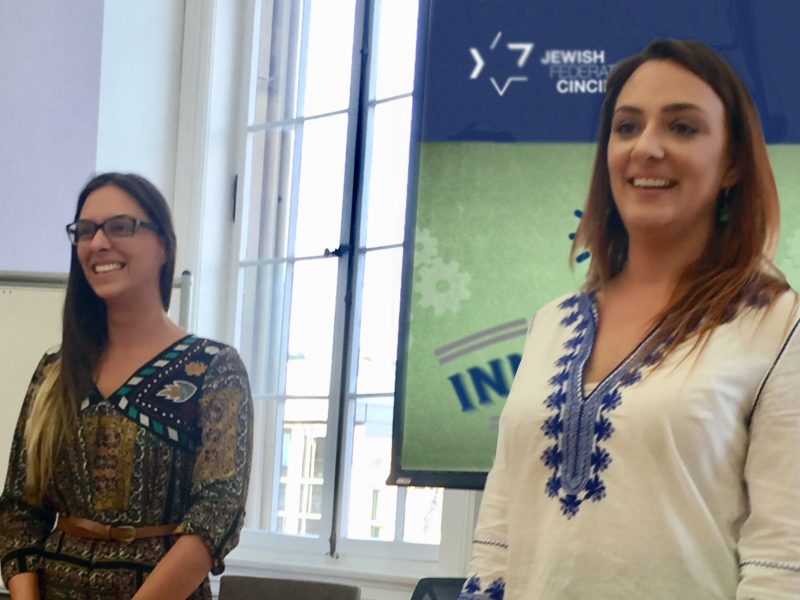 (Watch video and meet the winners, below.)

“Lucky, humbled, and energized.” That’s how one recipient felt after hearing her organization, which will create a new interactive, immersive experience to remember stories of the Holocaust, had won a Jewish Innovation Funds grant. Hagit Limor’s project is called Moniek’s Legacy, to honor her father, Holocaust survivor Menachem “Moniek” Limor.

Many cutting-edge ideas are coming to vibrant life in Cincinnati’s Jewish community, thanks in large part to the second year of the Jewish Innovation Funds, which provide grants to support changemaking and high-impact ideas that enrich communal life and solve challenging problems through a Jewish lens.

Today, Jewish Innovation Funds announced that six winners have been chosen. They are the Beyond 2020 Website, the David Project, Moishe House, Moniek’s Legacy, Pasaporte, and Six Points Collective. A giving circle of donors, organized and supported by the Jewish Federation of Cincinnati, pooled their resources and made the funding decisions together.

The program is currently in its second year, and has grown significantly. Last year it gave out $80,000 in grants; this year it was able to give out $102,500, with another $17,500 earmarked for potential further support of the winners.

Four of the six projects are aimed at Jewish young adults; one is a Holocaust education project, and one plans to help the children of undocumented Cincinnatians obtain US passports. The winners are either new ventures or new local branches of successful national organizations. Three of the six were chosen again after being funded last year.

Asked how their project was innovative, Jake Hodesh of Pasaporte said, “We’re going to work hand in hand with 80 children [of undocumented Cincinnatians] here and get them [US] passports—nobody else is thinking about that, nobody else is doing that. We worked hard to explain in the application why we believe that our project represents important Jewish values. We were so glad that the panel believed in us.”

The giving circle funders expressed passion and optimism about the winners, and the process overall. Asked why he participated, Bret Caller said, “I want my kids to hopefully participate in some of the innovation that we’re funding, and to understand what we are doing, so that they will also be involved and support the Jewish community.”

“We are so proud to facilitate this project for a second year and to give individuals and organizations the opportunity to create positive change for our community,” said Danielle V. Minson, Chief Development Officer for the Jewish Federation of Cincinnati. “I love that we are able to innovate beyond our traditional structure and I am excited to see where these winners go over the course of this year.”

The six winners are:

1. Ariella Cohen and Lindsey Wade, of the Beyond 2020 Website, are developing the collectively generated idea of a grassroots, inclusive Jewish young adult website for “everything Jewish” in Cincinnati. Beyond 2020 is a project of the Jewish Federation of Cincinnati.

2. The David Project, a nationwide organization represented by Dylan Morpurgo, received funding for a second year. This Israel advocacy organization works with Cincinnati Hillel to

empower student leaders to build mutually beneficial and enduring partnerships with diverse student organizations so that the pro-Israel community is integrated and valued on campus.

4. Hagit Limor, of Moniek’s Legacy, with support from the (newly renamed) Holocaust & Humanity Center, will create a multimedia, immersive project to “take people inside the story of the Holocaust.”

5. Jake and Miriam Hodesh of Pasaporte will help 80 American-born children of undocumented residents of greater Cincinnati to obtain US passports.

this program by funding its first year in 2016.

Jewish Innovation Funds is organized and supported by the Jewish Federation of Cincinnati.

The Jewish Federation of Cincinnati: We look at the whole picture, taking into account the diverse needs of the entire community.

Together we can do almost anything.

“We’re going to work hand in hand with 80 children [of undocumented Cincinnatians] here and get them [US] passports—nobody else is thinking about that, nobody else is doing that.” —Jake Hodesh, Pasaporte