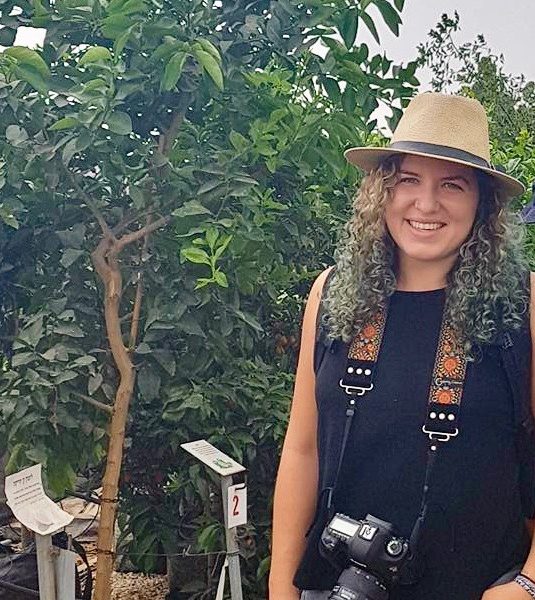 Brianna Pecsok, 25, is the Jewish Federation’s first Cincinnati Fellow in Israel, an American emissary teaching Israelis about life, culture, and Judaism in the United States. She is pictured here during one of her first days in Netanya, exploring a fruit tree farm.
October 11, 2017 | 0 Comments
Tweet
Share76
Share
76 Shares

August 31, 2017. I landed in Ben Gurion airport in Tel Aviv. This is now my fourth time going in and out of this airport; the novelty of a new place has worn off and instead is replaced with the warm feeling of familiarity. I was greeted at the airport by Tye Collins and Avi Kagan from Partnership2Gether with balloons and hugs (and the obligatory “I’m here safely!” picture).

My first weekend in Netanya was filled with surprises. The day after I arrived, I toured a fruit tree farm in K’far Vitkin with my hosts, Dalia and Eli Klein. I think I’m really a kibbutznik at heart, so I was so excited to see all of the unique trees they were growing and spend time surrounded by nature and animals. Most of the tour was in Hebrew, which meant my jetlagged brain had some time to wander. I began thinking about how similar my first day in Israel was to these baby trees. They were about to be taken and planted in a new place, taken care of by the community, with hopes that one day the tree will provide fruit. I, too, am in a new place, was welcomed and cared for by my new family, and am in the process of setting down my shorashim (roots) to soon thrive here.

Friday night dinner was spent in Havatzelet Ha’Sharon (which means “Lily of Sharon”), a little town north of Netanya. I have to get used to the fact that here, the word “Shabbat” does not refer to Friday night, but to Saturday! I spent time at the beach on Shabbat. (I think I’m a regular now.) On Sunday, I learned more about the history of Netanya. What we now know of as Netanya started as an orange orchard cultivated by pioneers. That evening, my hosts gave me another surprise when they took me to see baby sea turtles rescued and sent out into the ocean! The sea turtles would not have survived if they were not dug up out of the sand by the ecologists. There were a lot of children there, and I think my enthusiasm rivaled theirs. This was not an event I was used to growing up in Cincinnati. The same evening I was welcomed by the volunteers of the P2G committee and had a chance to introduce myself, enjoy delicious avatiach (watermelon) and ugah (cake), and learn more about the many programs in place making connections between Cincinnati and Netanya.

On Monday, September 4, I moved into my apartment and met the other people participating in the Masa Israel Teaching Fellows (MITF) program. We live in apartments at Netanya College in the village of Kiryat Ha’Sharon, southeast of the center of the city. Living here is akin to living in Hyde Park. It’s close to “downtown” but is a family-friendly and thriving community. We get around by taking the bus. (I have become very familiar with buses #15 and #21!) Most of the students that attend the college are on break, so the campus is pretty quiet. I expect achareach chagim (after the holidays), things will get much busier around here. We spent a weekend at Kibbutz Gonen, have started ulpan (intensive Hebrew learning), and have started our “pedagogical training.” We have not begun school yet, but are gearing up for our first weeks in the classroom.

I am connecting with my peers in the MITF program, seeing old friends, and making new ones. I am looking forward to experiencing the High Holidays here and getting in the “holiday spirit.” I am excited to begin my work here, but for now, am enjoying going with the flow of Israeli life and finding my roots. Shana Tova!

The Cincinnati Fellow is Israel program is made possible by Partnership2Gether of the Jewish Federation of Cincinnati and by the Masa Israel Teaching Fellows Program.

Thanks to you, Brianna Pecsok is in Israel making connections and expanding awareness of the many ways Americans practice their Judaism.

“I began thinking about how similar my first day in Israel was to these baby trees. They were about to be taken and planted in a new place, taken care of by the community, with hopes that one day the tree will provide fruit. I, too, am in a new place, was welcomed and cared for by my new family, and am in the process of setting down my shorashim (roots) to soon thrive here.”—Brianna Pecsok