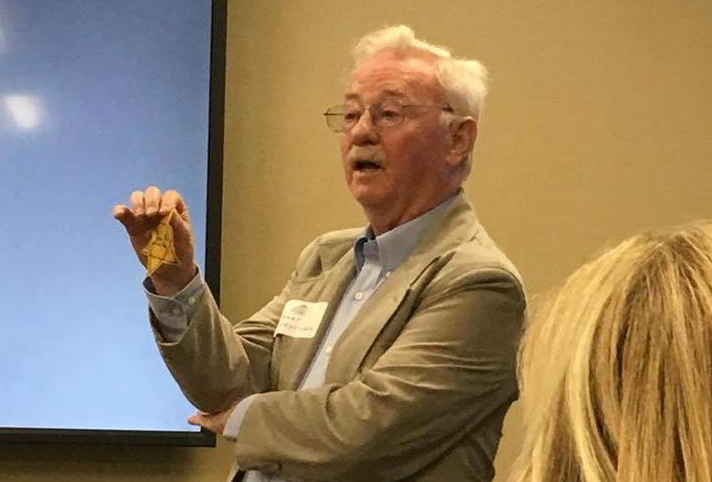 Holocaust survivor Henry Fenichel from Cincinnati talks to a group from Cincinnati and a group from Netanya, Israel via Skype on Holocaust Remembrance Day. He is holding the yellow star badge that he was forced to wear as a child at Bergen-Belsen concentration camp.
May 5, 2016 | 0 Comments
Tweet
Share2
Share
2 Shares

Nine Days of “We”

It’s a challenging time of year to be a shlicha—community emissary—so far away from Israel.

This period of days—Yom HaShoah, Yom HaZikaron, and Yom HaAtzmaut—are so meaningful and significant to my Jewish identity.

Yom HaShoah—Holocaust Remembrance Day—in Israel, is a national day of remembrance. We stop driving/teaching/working/walking and stand as a nation—as a people—for a minute of silence, as we hear the siren call.

We participate in ceremonies, we listen to sad songs played on the radio, we watch documentaries on TV, we wear white shirts and dark pants. Restaurants close; the whole street shifts a gear.

Yom HaShoah reminds us of how lucky we are to have a state of our own, to be able to defend ourselves. It also reminds us of the great responsibility that comes with sovereignty.

This past Wednesday I participated in a joint Skype call we held with members of our P2G partnership city of Netanya. We brought together young adults from Cincinnati and young adults from Netanya to hear together the testimony of Holocaust survivor Henry Fenichel from Cincinnati. Both groups had a discussion about Yom HaShoah, remembering, and the concept of “never again.”

Next week we will be holding a Yom HaZikaron ceremony. Yom HaZikaron is Israel’s Memorial Day for fallen soldiers and victims of terror. It is one of— if not the— hardest day for me as an Israeli. Israel is a small country. There is not one person in Israel who doesn’t have a friend, a relative, or a friend’s relative who was killed as a soldier protecting the state of Israel, or hurt in a terror attack.

It is a sad day that reminds us of the price we have to pay for having a state, for being independent, for having sovereignty.

And then the sun sets, the night falls, and from anguish and sorrow, accompanied by the official festive and moving torch-lighting ceremony on Mount Herzl, we begin our 24 hours of celebration of our independence (Yom HaAtzmaut).

These are intense days in Israel, both within a person’s heart, and out in the street.

My role, as you might know, is to bring Israel to Cincinnati, to help build bridges between our communities. Part of this includes being a part of the creation, together with the JCC’s devoted staff, of a Yom HaZikaron commemoration and a Yom HaAtzmaut celebration for our community.

It is sometimes hard to explain or to connect Jews here in Cincinnati to something that might seem foreign, “Israeli.”

When I came across this YouTube video of Avram Infeld talking about the importance of these days to Jews worldwide as well as to Israelis, “The 9 Days of ‘We’,”

I found words to express why I feel it was so important for our community here in Cincinnati to feel they have a place and a part in Yom HaZikaron and Yom HaAtzmaut and also, on the other hand, for Israelis to understand the exact same thing. Why this not just an Israeli story, it is the story of us. Of our people.

May we have a meaningful week, commemorate and celebrate our peoplehood, our sovereignty, and our responsibility as a Jewish people.

It’s a challenging time of year to be a shlicha—community emissary—so far away from Israel.