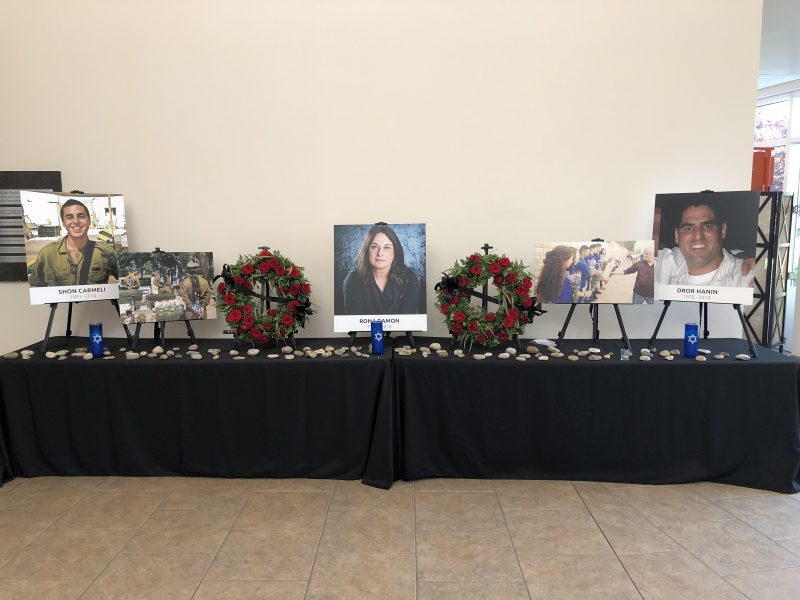 This Yom HaZikaron we remember the lives of Dror Hanin, Shon Carmeli, and all others who died in defense of the State of Israel.
May 8, 2019 | 0 Comments
Tweet
Share148
Share
148 Shares

On Yom HaZikaron, We Are One ‘Bereaved Family’

It is said that Israelis are, inevitably, deeply experienced with grief and sorrow and, consequently, capable of moving forward in life. However, many times the truth is quite the opposite. The burden of sorrow and the feeling of loss are often way too heavy to bear, and the pain is overwhelming. As we mark Yom HaZikaron (Israel Memorial Day) in the United States, in Israel, celebrations of Independence Day are already at their peak. But I cannot avoid thinking about those who grieve, as I understand grief is an inseparable part of their lives.

The committee wanted to explore the idea of the bereaved family—the idea of a symbolic family, which includes everyone who has suffered the loss of a loved one. This includes many more than the families of fallen soldiers. It includes the civilians who support those soldiers and those who chose to make aliya without the support of close family in Israel.

Dror Hanin was born in Israel in 1976 and died during Operation Tzuk Eitan in 2014 while volunteering to distribute food to Israeli soldiers. Dror was a hands-on kind of person whose passion was to help others without asking anything in return. He donated and gave; he fixed and built; and he helped anyone in need. His mission was to make others happy.

Staff Sargent Shon (Nissim) Carmeli was born in Texas in 1993. He also died during Operation Tzuk Eitan at just 21 years old. In 2008, Shon and his parents made Aliyah (immigrated) to Israel. Several years later, his parents returned to the United States, but Shon decided to stay in Israel and join the International Defense Forces (IDF). Because of his selfless commitment, tens of thousands of people came to Shon’s funeral.

May their memories be for a blessing.

No matter the reason behind the loss of a loved one, the impact is the same. It could be a volunteer like Dror, a soldier like Shon, or just person going to shul (synagogue) like Lori Gilbert-Key in Poway. Their deaths bring us together as a people.

This is the meaning of mishpachat ha sh’kol—the bereaved family.

We are a family, and as a family, we share much more than the memory of the fallen. As Jews, be it in Israel or in the United States, or anywhere else in the world, we share histories and stories. Our joint past shapes so much of our present, and our present experiences shape our future. Our Jewish history teaches us that divisiveness and lack of unity make us vulnerable. It also teaches us that when we stand united, there are wonders we can make happen and great goals we can achieve.

This Yom Hazikaron, we remember Dror and Shon, the four killed this past weekend all others who have died in defense of the State of Israel, the lives taken in Pittsburg and Poway, and all those who made the ultimate sacrifice for the Jewish people. I hope we continue to stand united in the face of the many challenges that wait ahead.

“We are a family, and as a family, we share much more than the memory of the fallen.”
—Amnon Maggid