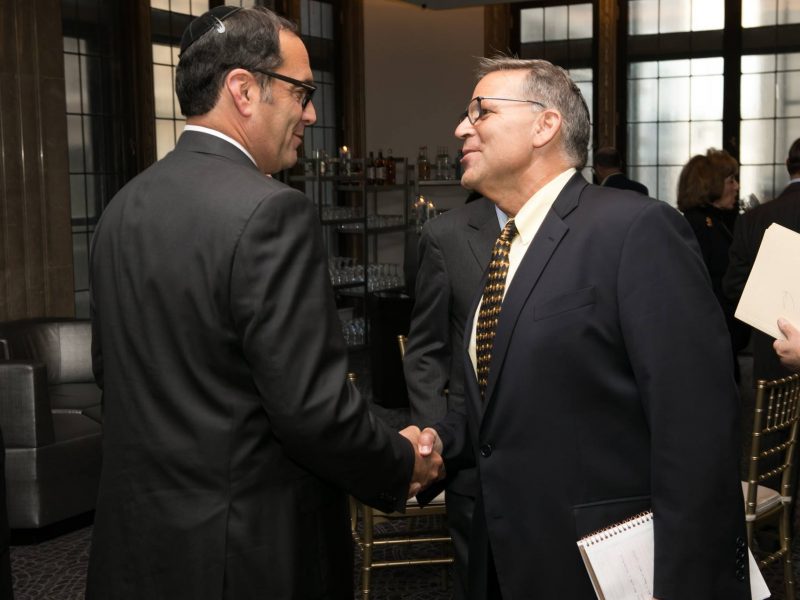 Jerry Silverman, President and CEO of the Jewish Federations of North America (JFNA), visited Cincinnati in early September as the guest speaker at our annual Major Gifts dinner. While he was in Cincinnati, we were able to show Jerry much of our community. Before he left to head back to New York, I grabbed a few minutes of his time to get his impressions of Jewish Cincinnati.

How many Jewish communities have you visited in North America during your time as CEO of Jewish Federations of North America?

I have had the privilege of visiting 143 communities in North America.

In the past 24 hours, give us some of the highlights. What stood out to you about Cincinnati?

My first impression was the people—meeting with the volunteers of the community and the leaders of the community. I got such a warm feeling, a real sense of community. There is a real hamesha understanding of what the definition of community is here in Cincinnati. I also was absolutely astonished, and I mean this sincerely, because I go to hundreds of events a year. The Major Gifts dinner last night was executed flawlessly. Everyone there wanted to be there. It wasn’t an obligation. Everyone I talked to was enjoying each other’s company. It was one big family. This community has built a culture of caring for each other like a family. That left an impression on me.

How would you describe Cincinnati’s involvement in advocating for religious pluralism in Israel?

The Cincinnati Jewish community and the Cincinnati Federation have taken a leadership role across the Federation movement on the issue of pluralism in Israel and on inclusivity of Jewish practice in Israel. It is truly amazing, through Kim Heiman’s leadership, how this new program, the Israel Religious Expression Platform, has evolved and grown through grassroots efforts to spread the word about pluralism in Israel. It’s truly been groundbreaking, and Cincinnati is on the forefront.

Cincinnati, through their Partnership2Gether program, has piloted in an entrepreneurial way what is called a reverse mifgash—a reverse community setting where you put a Jewish educator from Cincinnati on the ground in Netanya. This is something that I believe within the next five years at least 50 communities will follow. That is vision, and that is leadership.

You heard what we are planning to do with the Holocaust & Humanity Center, moving it to the Cincinnati Museum Center. How did that strike you?

I have to say that when I heard the announcement, I got goose bumps. The concept of this community putting that kind of investment in our history and putting it in the Cincinnati Museum Center itself is inspirational. I believe you will have upwards of a hundred thousand people a year who will walk into this new museum. You’re not just putting in a museum for the sake of having a museum. You’re creating a museum for the sake of educating the public and making sure no one ever forgets that the Holocaust happened, and doing it in a way that is integrated into and aligns with the Cincinnati community. It is absolutely innovative and creative.

What challenges do you see ahead for Jewish communities? And how do you see Cincinnati being prepared or needing to get prepared for those challenges?

The biggest challenge in Jewish communities today, across the board, is the concept of sustainable leadership, both on the professional side and the volunteer side. The beauty of Cincinnati and the strength of Cincinnati is its leadership, both on the professional side and on the volunteer side. There is such an aligned definition of community as it pertains to the agencies that work with the Federation, and as it pertains to the Federation’s extraordinary working relationship with the Foundation. That alignment and collaboration between professionals and volunteers truly sets Cincinnati apart and puts it absolutely in the top echelon of Federations.

Between visits, you took a lot of phone calls. What was that about?

As everyone knows, we are dealing with the aftermath of Hurricane Harvey. Many of the phone calls were about Houston, because in the nanosecond after Harvey hit, we had people on the ground. The National Federation system leveraged expertise from Federations. We had people on the ground within two days of the hurricane. They flew into Austin to get to Houston. They have been supporting the Houston community’s ability to respond—assessing the situation where three synagogues where destroyed; a day school inside a synagogue that was destroyed; and three early childhood programs that have to be relocated. Upwards of 1,500 Jewish homes were destroyed. Countless people are facing challenges, and we are there on the ground. Our second team is on the ground now. Our third team is getting there on Sunday. So I have had many calls about Harvey.

My visit was really something special. Thank you.

“Everyone there wanted to be there. It wasn’t an obligation. Everyone I talked to was enjoying each other’s company. It was one big family. This community has built a culture of caring for each other like a family. That left an impression on me.”– Jerry Silverman, JFNA President & CEO, on the Federation’s annual Major Gifts dinner