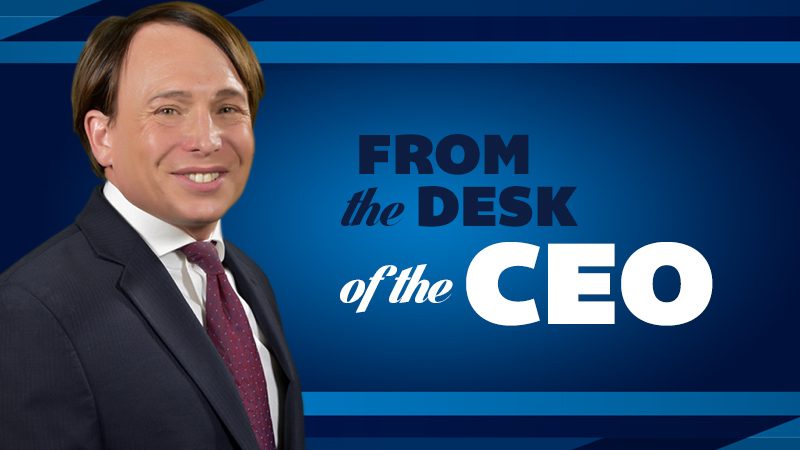 From the Desk of the CEO: Learning from Tragedy

This monthly report from CEO Shep Englander features topics of interest to the Cincinnati Jewish community and the work of the Jewish Federation of Cincinnati.

In the face of tragedy, our community rallies around each other. Sometimes, the most important thing we can do is to show up and be there for each other.

The tragic school shooting in Parkland, Florida has shown me this again. As you know, one of those killed, 14-year-old Jaime Guttenberg, is the granddaughter of Cincinnatians Ethel and Marvin Guttenberg and the niece of Abbie and John Youkilis (a past president of our Jewish Community Relations Council).

Every day since she has returned from the funeral in Florida, Ethel has come to the J Café. Every day, I watched as one person after another walked up to her, looked in her eyes and embraced her. A dozen people crowded around her lunch table, tears on their faces.

Learning from tragedy—After the shooting, it came to light that the FBI received two tips about the confessed shooter—and specifically, that he might seek to kill his former classmates.  Somehow those tips did not reach the level of law enforcement that could have made the difference.

Among the lessons this horror revealed is that today the FBI and other law enforcement agencies often do not have sufficient resources to monitor all the threats to our community. It is chilling that in the weeks before the shooting, our SAFE Cincinnati Director, Ken Wall was explaining to our SAFE Committee that no one will monitor threats to our community like we will. He proposed that SAFE add the capacity to monitor developing threats (online and otherwise) so that we can engage law enforcement before tragedies occur.

Last week, when Christopher Wray, the national FBI Director visited Cincinnati, I was honored to attend a small meeting with him. When I asked Director Wray about Ken’s proposal, he agreed that we all need to be more proactive.

Standing up against hate—Last week, the ADL reported a 57 percent rise in antisemitic incidents in the U.S in 2017. This makes the work our Jewish Community Relations Council (JCRC) even more important. The JCRC educates about tolerance, models civility, and builds relationships with leaders of other communities who stand with us to oppose extremists.

For example, JCRC Director, Jackie Congedo worked with leaders of other faith groups to respond to an Enquirer profile of a Cincinnati attorney who volunteered to represent the extremists who spread fear and division in Charlottesville. He is a proud anti-Semite and Holocaust denier. Please watch for an op-ed from Jackie in the Enquirer a week from Sunday about how we must respond to this issue.

We are proud of their work towards ensuring the security of our community and support their mission to ensure Jewish security and a just society for all. It is clear that mission is as important as ever. The JCRC calls out extremism and hatred when they see it. More importantly, they develop relationships with leaders in other communities, like the Archdiocese of Cincinnati and the Bridges of Faith Trialogue, who stand up alongside our Jewish community in the face of dangerous rhetoric from extremists. Together with those allies, the JCRC can confront this common threat and do the daily work of educating about differences and teaching tolerance.

A True Hero, Connecting Our People—Last night we honored an actual hero. Natan Sharansky inspired the world by fighting for the release of Soviet Jews in the 80s. Refusing to compromise, he spent nine years in Soviet prisons using hunger strikes to win—and ultimately enabling 2 million Jews to get out. Mike Zelkind, CEO of 80 Acres Farms inspired me to make the trip to NYC to attend. Mike told me that his family’s ability to leave the U.S.S.R. and start a new life in America might not have been possible without Sharansky’s heroism. Mike’s wife, the Federation’s Women’s Philanthropy Director, Jen Zelkind, and their son also attended.  President Bush, PM Netanyahu, and hundreds of others braved a blizzard in NYC to be part of this historic night.

Since 2009, Natan Sharansky has served as Chairman of the Jewish Agency, where he has devoted himself to bridging the divide between Jews living in Israel and the rest of us. He has made my current service on the Jewish Agency’s Board of Governors so meaningful. And we are proud that Maia Morag, our Israeli emissary (Shlicha), was one of a few emissaries invited to and honored at the event.

“Every day, I watched as one person after another walked up to her, looked in her eyes and embraced her. A dozen people crowded around her lunch table, tears on their faces.” –Shep Englander