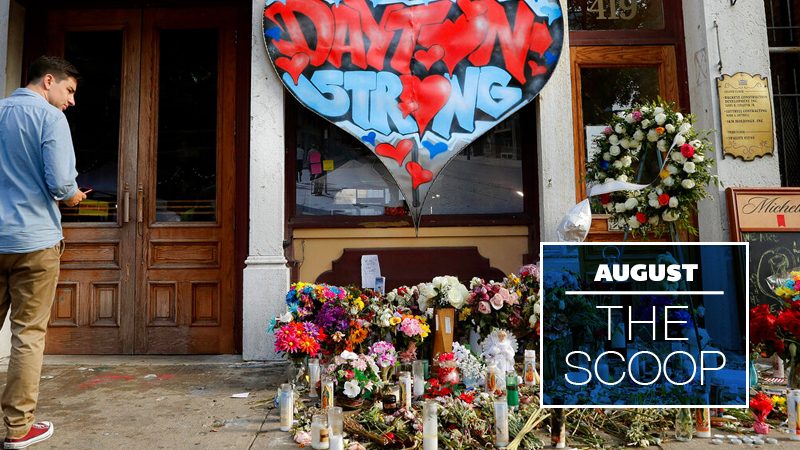 ‘Do Something’: The Scoop in August

“Do Something.” In a year that has seen more mass shootings than days, we can sometimes feel numb to news of another. However, the violence in Dayton last weekend reached us. We heard that as Ohio Governor Mike DeWine spoke at a vigil in Dayton, the crowd chanted, “Do something.”

I am proud that the Federation’s Jewish Community Relations Council (JCRC) has been doing something for the last year and a half. As increased mass shootings, including at synagogues in Pittsburgh and San Diego, and at the school in Parkland, Florida have shaken our community, the JCRC has been finding common ground on this divisive issue, respecting the rights of law-abiding Americans to own handguns and rifles while working to ensure that our schools, houses of worship, and public places are safe spaces to gather. They understand that we must pursue multiple strategies, including gun safety measures.

The JCRC played a leadership role among other interfaith and Jewish partners in drafting a consensus letter urging state legislators to develop a comprehensive approach to reduce the likelihood of future mass shootings.

I am pleased to see Governor DeWine take quick action following the Dayton shooting and propose common sense gun reform, including a red flag law, which would allow friends and family members to seek removal of a firearm from people they believe pose a danger to themselves or others. The interfaith coalition that the JCRC is helping to lead will keep the pressure on our elected officials to follow through and enact reasonable measures to help prevent gun violence.

Nationally, the Jewish Federations of North America is convening a special task force to come up with an action plan to advocate for gun safety measures, with recommendations expected this fall. Cincinnati will be a key player in this; John Youkilis, a JCRC board member and past president, was invited to sit on the task force. (As you may know, Abbie and John Youkilis’ niece was among those killed in the Parkland massacre).

Shaping Better Leaders. The Federation and The Foundation are aligned on a Talent Management Initiative because to be a premiere Jewish community, we must continue to facilitate a pipeline of talented, passionate professionals. So we recruited 18 high-potential professionals from six key organizations to participate with more than 500 other professionals in Detroit for the JPRO Conference. The recently re-launched JPRO Network creates opportunities to strengthen the skills of all who work in the Jewish community and builds supportive networks to bolster their professional journeys. The “JPRO19: What Connects Us” conference promises to: inspire growth, create meaningful connections with other Jewish professionals, build skills, and advance critical dialogue.

L’Hitraot Chaverim! (So long, Friends) It’s not goodbye, but so long to our young emissaries from Israel, Adi and Asaf. They have brought such energy and passion to our community this year. It’s incredible to see their impact in numbers. Since last August, they have engaged with:

They averaged more than 10 programs and actively taught more than 28 hours per week!

But numbers can only tell part of the story. The other part is told through kids like Benjamin, a Rockwern student who was having a hard time, but who found a role model in Asaf after connecting over their shared love of dance. And through students at Indian Hill High School, who Adi overheard in the hallways talking excitedly about Israeli technology and culture after their presentation. I am so thankful for the important work they are doing, building bridges with Israel—both within our community and in the broader Cincinnati community.

"The JCRC played a leadership role among other interfaith and Jewish partners in drafting a consensus letter urging state legislators to develop a comprehensive approach to reduce the likelihood of future mass shootings."