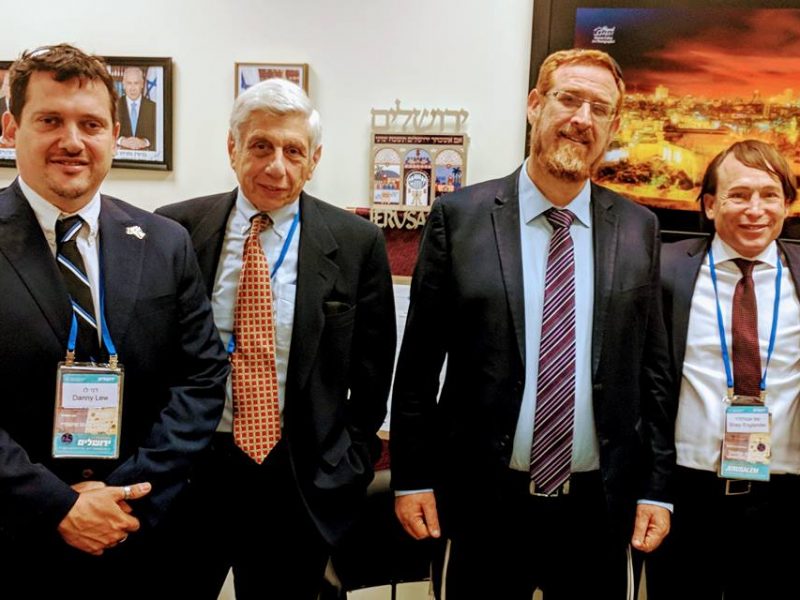 Expanding Freedom of Marriage in Israel: Q&A with Kim Heiman and Einat Hurvitz

This Q&A series features my conversations with community leaders and tackles high priority and high interest issues in Jewish Cincinnati with candor and purpose.

At the end of October, I traveled to Israel for the Jewish Agency for Israel Board of Governors meeting. On the agenda were the controversial decisions last July about the egalitarian prayer section of the Kotel and the Conversion Law. After meetings at the Knesset, I walked away optimistic that a new area for pluralistic prayer will be built at the Kotel, even if the conditions of the original agreement are different. But I also concluded there is more work to be done in terms of educating the Israeli public about pluralism in the United States.

While in Jerusalem, I spoke with Israel Religious Expression Platform (iRep) Chair Kim Heiman and iRep Director Einat Hurvitz about their efforts to move the needle on religious pluralism in Israel.

Just before July 4, I stood here and reported that the Israeli government had frozen its agreement on pluralism. That day, international attention was focused on this issue of how Jewish religious practice that is not Orthodox is recognized, or isn’t recognized, by the Chief Rabbinate in Israel, and how the government is relating to that. Since then, the project that Kim Heiman of Cincinnati had started a few years earlier, and that Einat Hurvitz is the professional director of, has gotten more attention because it got ahead of this issue and started to work on understanding Israeli attitudes. I’m very fortunate to be with them today to understand how iRep is fitting into this picture and addressing the big problem that we first really focused on in July. First I wanted to ask Einat to tell us in a few sentences, what iRep stands for, and what is the goal of iRep?

Einat: iRep is the Israel Religious Expression Platform. It’s an initiative of JFNA. We currently have 18 Federations that are part of our initiative—Cincinnati one of the first ones. We’re working in Israel to encourage respect for diverse religious expressions. It’s an advocacy program where we partner with Israeli NGOs that work to advance this cause, to promote public awareness to alternative ways of being Jewish, not just through the Rabbinate.

Kim Heiman, you’re the Chair of iRep. We’re very proud of our Cincinnati community leader. Why was it that you thought it was important when you were a member of the Jewish Federations of North American Planning Table to try to create this initiative that you launched?

Kim: First, it was a group effort to launch iRep. But I was particularly interested in it because I had been to Israel, to three different weddings in the scope of one year, and all three of the weddings I went to were non-traditional weddings with alternative officiators outside the Chief Rabbinate, which actually is not a legal marriage in Israel. It occurred to me that Israelis should be able to have the freedom to get married in a way they choose but also to get married Jewishly, and that didn’t seem to be accessible for many, many Israelis.

And Einat, what would you say is the goal for iRep this year? What would you like to see happen in the coming year?

Einat: So really the first issue that we delved into was freedom of marriage. So having more options of marriage recognized. We’ve already seen some improvement in how Israelis see the issue, where more and more Israelis—over 50 percent—see this as something that’s relevant for them. That they would choose an alternative marriage option outside of the Rabbinate. What we want to see in the upcoming year is that number actually growing. We want to see people actually choosing alternative marriages—30 % of Jewish couples. And we will start to see it have a wider effect on decisions makers.

Why is it that the arrangement the Chief Rabbinate offers is not acceptable to all Israelis? What are the restrictions there?

Einat: Some people just can’t get married through the Rabbinate, even if they wanted to, because the Rabbinate doesn’t recognize their Judaism. They might have immigrated from the Soviet Union. They might have immigrated from North America. The Rabbinate thinks they’re not Jewish enough, and they just don’t let them get married. Then there are a lot of people who don’t want to get married through the Rabbinate because, according to their religious preference, they want a Reform rabbi, they want a Conservative rabbi, or they want a secular wedding where there are some Jewish elements but it fits their lifestyle. Of course you have all the LGBT couples who can’t get married. So we have about 660,000 Israelis who can’t get married in Israel at all. It’s a democratic state. It doesn’t provide solutions to its citizens. That’s something that bothers a lot of people.

So would it be fair to say that you’re working to make marriage completely inclusive of Israeli society?

Einat: Yes. Our mission is to have the state recognize more forms of marriage besides the Rabbinate. The Rabbinate will stay, but then there will also be an option to choose other marriage ceremonies. And people will have a way to express their own Judaism on this very important occasion.

“We have about 660,000 Israelis who can’t get married in Israel at all. It’s a democratic state. It doesn’t provide solutions to its citizens. That’s something that bothers a lot of people.” –Einat Hurvitz