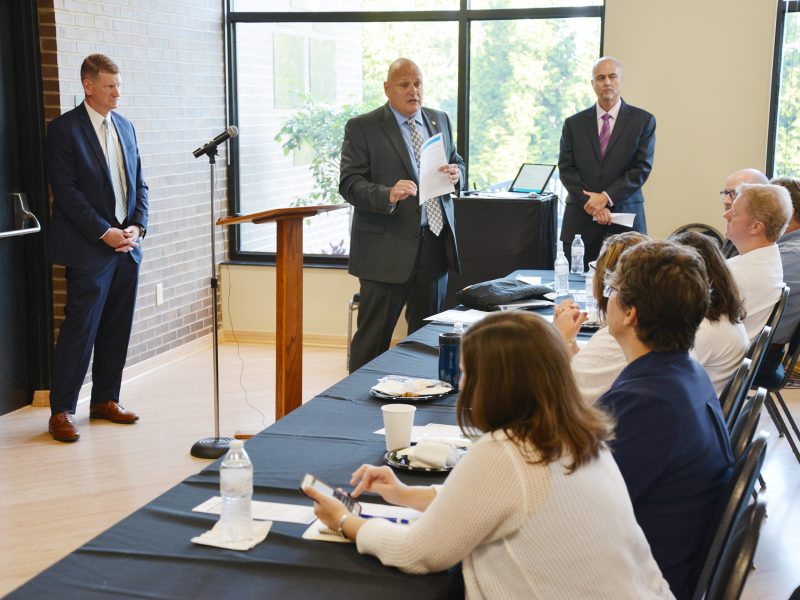 In preparation for the High Holidays, the Jewish Federation of Cincinnati’s SAFE Cincinnati program has been working with Jewish congregations and agencies to enhance preparedness ahead of a season in which the community is especially vulnerable.

“Unfortunately, that means we must be on higher alert,” said SAFE director Mark Dowd.

“Sadly, the demand to increase security at our facilities has never been greater,” said Federation CEO Shep Englander. “After unprecedented attacks on Jews at their houses of worship, and record numbers of reported antisemitic incidents, we need to make sure the agencies in our congregation are secure—and that our community members feel safe participating in Jewish life.”

In early September, Dowd invited professional and volunteer leaders from Jewish organizations for a special security briefing, called High Holidays, High Alert: Lessons from Pittsburgh. FBI Special Agent in Charge Todd A. Wickerham spoke about trends he is seeing in hate incidents, including antisemitism. Pittsburgh’s director of community security, Brad Orsini, discussed his community’s preparation, both leading up to the shooting and in the aftermath.

“Brad brought with him a lay leader from the Tree of Life Synagogue, who was present for the shooting,” Dowd said. “I think his powerful message landed with those in the room. He told us that he is only alive today because the advance training that he received ‘kicked in’ and guided him to safety.”

The security briefing was just one element in a coordinated security enhancement effort, which began seven years ago, when Cincinnati was one of America’s first Jewish communities to launch a community-wide security program.

“Since then, with extensive investment from The Jewish Foundation of Cincinnati, our SAFE Cincinnati program has vastly improved the security levels of our synagogues, schools, and community agencies in both visible measures and in ‘behind the scenes’ enhancements,” Englander said.

Investing in Our Security

Since its inception in 2012, The Foundation has funneled about $4 million through the SAFE Cincinnati program in order to improve the security status of the entire Cincinnati Jewish community. A significant portion of the funding has been directly invested in more than 35 Jewish facilities in the form of physical security upgrades and improvements.

Since 2015, more than $10,000 per month of Foundation financing has also been dedicated to local Jewish synagogues and schools to cover the costs of deploying off-duty police security during Shabbat services and weekly school sessions.

“The extent of The Foundation’s funding for security guards is unprecedented among US Jewish communities,” said Federation President Gary Greenberg. “In the last year, that funding has allowed us to create an Intelligence Center to monitor police intelligence reports, current events, and social media, to attempt to identify potential threats or suspicious activity which might impact the Jewish community. We are only the second Federation in the country to launch such an effort.”

SAFE Cincinnati’s staff includes two retired FBI agents and a facilities expert to run the program and continue to improve the community’s overall security footprint. In addition, the team has developed and maintains an incredibly close relationship with local police departments, with the FBI (including the Joint Terrorism Task Force, Cyber Crimes Unit and Hate Crimes Unit), and with the Greater Cincinnati Fusion Center. These relationships allow Dowd and his team to coordinate and share law enforcement and intelligence information on an ongoing basis.

Because of that close working relationship, Dowd was recently invited to speak before the executives of the Cincinnati Police Department at the Police Chief’s weekly meeting about the security needs and strategies of the Jewish community, particularly leading into the High Holidays.

Over the summer, SAFE Cincinnati initiated an annual program to help each Jewish organization conduct a comprehensive review of its security posture. Since mid-July, SAFE Cincinnati has teamed up with 34 organizations to review such security items as: making sure all security equipment (i.e., camera, access control and alarm systems) is properly maintained, operational, and is utilized efficiently; security protocols are being observed and maintained; emergency response plans are reviewed and updated annually; security training (such as active shooter training, usher/greeter training) is being properly and periodically conducted.

“We encourage each of our organizations and facilities to take security seriously and contact us to schedule and conduct active shooter and other trainings to make ourselves a stronger and safer community.”

“Sadly, the demand to increase security at our facilities has never been greater. After unprecedented attacks on Jews at their houses of worship, and record numbers of reported antisemitic incidents, we need to make sure the agencies in our congregation are secure—and that our community members feel safe participating in Jewish life.” –Shep Englander