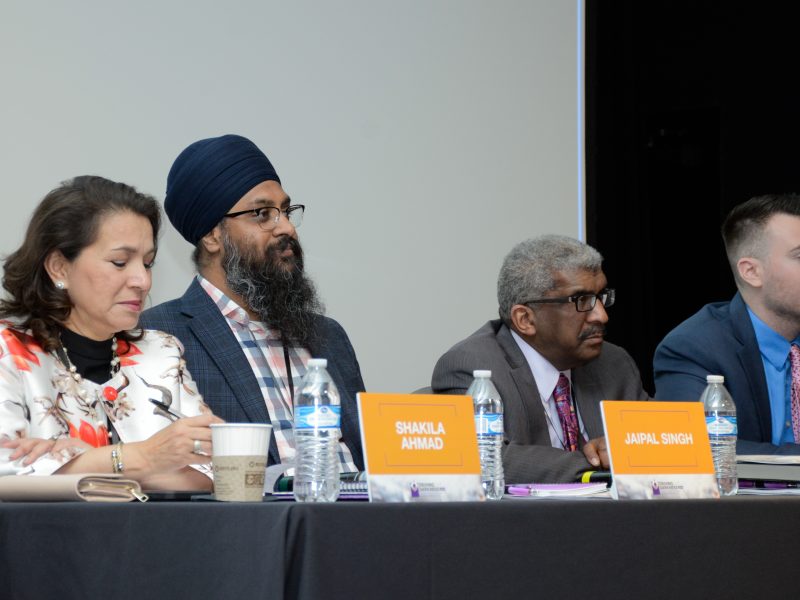 More than 300 leaders in the civic, governmental, faith, and educational communities participated in a day of learning about antisemitism and hate at Cincinnati Union Terminal in April.
May 24, 2019 | 0 Comments
Tweet
Share5
Share
5 Shares

A New Approach to Combating Antisemitism

At vigils across the country after attacks on Jewish communities in Pittsburgh and Poway, our allies who stood alongside us from other communities asked how they could help. At the same time, after the Unite the Right rally in Charlottesville, many of those same allies expressed confusion about what they had witnessed. “If Charlottesville was about Confederate monuments, why did they chant, ‘Jews will not replace us?’” many asked.

Along with the trauma and horror of these tragedies came an opportunity to answer those questions with a transformative learning experience designed to help allies in the broader community better understand antisemitism and how it intersects with other forms of hatred.

Our Cincinnati JCRC set out to host a full day of learning for community leaders which would teach historical antisemitism and its contemporary manifestations. Our vision was to feature both Jewish experts on antisemitism and voices from other communities who could speak to other forms of bigotry. We wanted to create a space for people to connect with each other and to inspire future collaborations.

With no local model for this to use as a guide, we were forced to innovate through challenges and doubts. How could we effectively teach thousands of years of antisemitism in one day of learning, while still leaving space to explore other forms of hatred in a meaningful and resonant way? How could we address the full range of antisemitism, from both the ideological left and right, in front of such a broad community audience without causing people to shut down in defensiveness? How could we navigate thorny conflicts inherent in this kind of intersectional endeavor, especially as it relates to helping progressive allies understand when criticism of Israel becomes antisemitism?

Despite those challenges, our one-day summit on antisemitism and hate, called Driving Out Darkness, drew more than 300 leaders from across our city’s civic, governmental, religious, and educational sectors. Every room was at capacity, and we weren’t preaching to the choir: more than 60% of participants came from outside our Jewish community. Jewish leaders in attendance came from all across the country to learn from our model with hopes of replicating it back home. The content was more resonant and the day more successful than we could have ever anticipated.

When the dust settled, we were left with the following tested learnings that can inform best practices for a modern strategy to combat antisemitism:

Balance the universal and the particular. We were very intentional about being inclusive of other forms of minority hate without losing our focus on antisemitism. Our logo, for instance, did not include any Jewish insignia; the event title “Driving out Darkness, the 2019 Regional Summit on Antisemitism and Hate” called upon the words of Dr. Martin Luther King, Jr., yet made it clear the day would focus on antisemitism. We hosted the event at Cincinnati’s Museum Center, a civic space near downtown.

We engaged both Jewish and broader community organizations in planning to help form the full fabric of the conversation. Our Jewish partners in the endeavor, The Holocaust & Humanity Center, AJC Cincinnati, Hebrew Union College-Jewish Institute of Religion, and the Jacob Rader Marcus Center of the American Jewish Archives, brought their expertise in combating antisemitism and their relationships with leaders in the broader community. Our allies– more than 40 organizations from all across the Cincinnati community–were not just co-sponsors; they helped us plan the breakout sessions and they volunteered their own experts to serve as panelists. We worked with moderators in advance to help them understand sensitivities in the Jewish community.

Bring people through a journey from history to today. In order to best combat it today, we have to first educate that antisemitism morphs over time. We asked scholars from Hebrew Union College, who specialize in the history of antisemitism, set the stage for a tour of the Holocaust & Humanity Center, a brand new, state-of-the-art museum, whose mission is to use the lessons of the Holocaust to inspire action today.

“Israel second” is the most effective approach. Discussions about the line between fair criticism of Israeli policy and antisemitism can be divisive, so we intentionally placed these plenaries and break out sessions at the end of the day, after people had a more general understanding of antisemitism. We also framed the day so that people had the expectation that they would be challenged, and we asked them to lean in right from the start. We included diverse voices who could speak on the full ideological scale. Great thought went into finding credible panelists and experts who did not paint with broad brushes but instead spoke with thoughtfulness and nuance. We found that participants were hungry for a safe space to have honest and fair conversations about the line between antisemitism and fair criticism of Israel- as these were the best-attended sessions.

Provide a space for people to connect. We were concerned leaving more than an hour for lunch would allow tempt some to cut the day short. Instead, participants told us an hour wasn’t enough time, because they used lunch to develop connections across communities. We included designed facilitations over lunch that encouraged diverse conversation. We hosted interactive word clouds so attendees could process as a group what they were experiencing.

Offer actionable tools and skills. The conference went well beyond educational panels to include skill building workshops. We offered a free, signed copy of Deborah Lipstadt’s book Antisemitism: Here and Now to attendees, so learning could continue beyond the confines of the day. And we asked participants to join the Cincinnati Regional Coalition Against Hate, a nonpartisan alliance of organizations committed to being vigilant against hate activity and developing proactive strategies to combat hatred in our region.

Survey results confirmed what we saw and heard anecdotally. Across the board, more than 75% of those surveyed said they left with a better understanding of antisemitism, feel more comfortable talking about it in their communities, and that they made new, valuable connections and relationships.

"We wanted to create a space for people to connect with each other and to inspire future collaborations." —Jackie Congedo