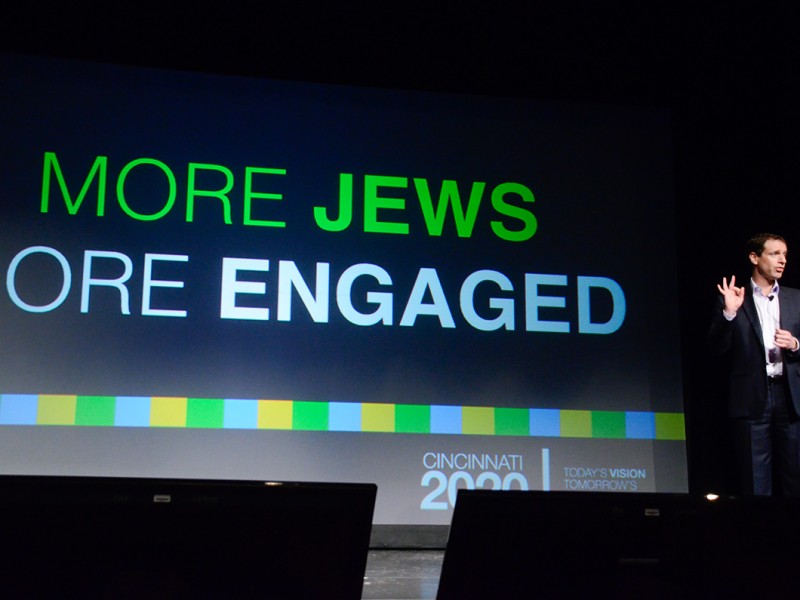 “A Transformed Community”: Halfway to 2020, Jewish Community Will Look Back at Successes, Plan for Next 5 Years Guest Post by Billy Bie

I wanted to share this guest post from Billy Bie, Planning Associate in Community Building at the Federation, in anticipation of the Leaders Forum on Cincinnati 2020 coming up this October 21. —Shep

“This is going to be a transformed community. People will look at Cincinnati and say, ‘this is a special place, they have really done some amazing things’—and we think that using Cincinnati 2020 as our vision we can do that.” Cincinnati 2020 committee chair Andy Berger spoke these optimistic words in 2011. Given this community-wide vision and 10-year effort, begun in 2010, the leaders of all Jewish Cincinnati’s congregations, synagogues, agencies, and other organizations will gather on October 21, halfway through the timespan. At this meeting, a Leaders Forum convened by the Jewish Federation of Cincinnati, we will come together again, see how far we have come, and plan for the next five years.

“We have addressed very successfully some key issues in jobs, poverty, travel to Israel, shared business services, and more,” said Barb Miller, our Director of Community Building. “With five years of experience collaborating, we are in a position now to really accelerate. We have candidates for our next initiatives, but we want input from the full range of our community leaders.”

The idea to plan together, as an entire community, for Jewish Cincinnati’s future initially came at a meeting called to organize an internal plan for the Jewish Federation’s future. “About 25 minutes into that first meeting,” recalls Tedd Friedman, current chair of Cincinnati 2020, “we realized that given our role as a community convener, planner, and funder, we couldn’t plan without reaching out to the whole community.”

Much work went into getting community input, collaboration, and buy-in. Andy Berger and his initial committee—a cross-community group of rabbis, agency executives, lay people, and Federation executives—met repeatedly with 40 organizations to achieve agreement on a shared community vision.

“The thing that was interesting was that the community actually came together and agreed on 5-6 paragraphs of something,” said Tedd. “It’s less important exactly what the paragraphs say and it’s much more important that you got an entire community saying: We have a shared vision. It was pretty exciting.”

Then the leaders gathered at a 2011 Leaders Forum, charged with using that shared vision to set community-wide priorities. “What was fun about that process is that we were literally and figuratively starting from a blank slate,” said Tedd. “There were easels with post-it notes, whiteboards—and no plan. It was really creating something out of nothing.”

For example, one of the many substantive achievements of that initial meeting was the idea of improving business back-office services. Andy said, “The idea of SBS [Shared Business Services] came out over and over again—can’t you create something that would make our back office functions more efficient? Can’t we stop duplicating accounting? SBS was—loud and clear—something compelling to people in the room.” This idea has already become a reality through the Jewish Federation’s Shared Business Services, and the Federation has become a leader for other Federations across the nation in modeling this idea.

In another example, it became clear that while many of our young adults had two to three opportunities to travel to Israel with Jewish Foundation grants, many of their parents had not had this experience. “We heard, over and over, a strong desire to enable more of our community and more adults—the parents—to travel to Israel with similar subsidies, thereby alleviating the financial burden,” said Barb. “So this summer, 2016, the local congregations will be able to bring their congregants to Israel with generous subsidies from The Jewish Foundation and through a community-wide, first-of-its-kind mission to Israel, coordinated by the Jewish Federation. This initiative came directly out of those brainstorming sessions.”

After much work to synthesize what had come out of the Leaders Forum, Andy Berger and the Cincinnati 2020 committee went around to each organization again, to get each one’s endorsement of the revised vision and objectives, now called the North Star, that they had each contributed to.

The North Star is where we as a community want to go. “The headline of North Star is ‘More Jews, more engaged,’” said Tedd. “But North Star is not finished. Last I looked it was version 20-something. There’s a badge of honor in the fact that this document is evolving. Ideas change. For example at the Leaders Forum we will see that the North Star will start to have metric-driven goals so we can know whether we’ve been successful or not.”

In line with this approach, this year for the first time our allocations volunteers, when looking at who the Federation funds and why, used the goals of Cincinnati 2020 to clarify and align their funding priorities.

Tedd believes that Jewish Cincinnati is a uniquely collaborative Jewish community, thanks to great leadership and what he calls a perfectly-sized (not too little and not too big) community. And the community has surely benefited from Cincinnati’s recent ramping up on multiple fronts as an up-and-coming city. “I’ve been very pleasantly surprised at how collaborative our community can be,” said Tedd. “The amazing thing about this process has been the organic collaborative nature. The plan evolves as we collaborate more—and it gets better. It’s not static, it’s a live, ongoing process.”

The potential to achieve a transformed community, as Andy framed it in 2011, is very real. This community has amazing opportunities. We’ve got deep resources in human talent, in dollars, in a successful history of collaboration, and so the benefits of working towards a common vision are incredible. Stay tuned.

“The amazing thing about this process has been the organic collaborative nature. The plan evolves as we collaborate more—and it gets better.”—Tedd Friedman, President-Elect, the Jewish Federation of Cincinnati and Chair, Cincinnati 2020