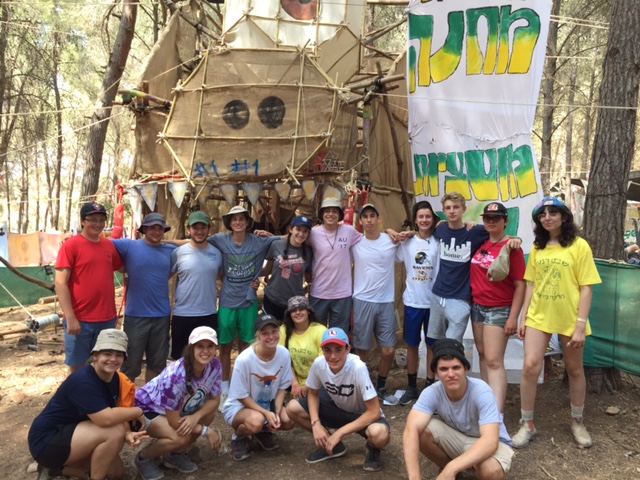 All Partnership2Gether (P2G) projects aim to make connections on a people-to-people level and create relationships between Cincinnati and Netanya residents. Because of your generosity, Israeli and American teens are able to form lifelong friendships, and nowhere was this more apparent than on the Camp Livingston Gesher trip to Israel this summer. Teens from both countries get to create deeper relationships because of the multi-year process. Our Camp Livingston Gesher kids get to reconnect in Israel with scouts who had been at camp last summer. And in this day and age of social media, they maintain their relationships for years. —Karen Goodman, P2G Cochair

This summer, thirteen teenagers from Camp Livingston completed an exchange with their counterparts in Israel, making the 6,000-mile divide that separates the two camps feel a lot shorter.

The campers, all 15- to 17-year-olds and starting their junior year in high school, were part of a larger group of 85 teens from across the country traveling as part of the Livingston Gesher trip, a four-week-long exciting program dedicated to introducing Jewish teens to all that’s great about Israel—its culture, its history, and its people.

“You read about Israel and see pictures of it, and you know it exists,” he said, “but experiencing it is something quite different. It’s our Jewish homeland. In Jerusalem, you see the history—things that are 3,000 years old and that happened in the Bible. There’s nothing like that in the United States.”

Reunited and it Feels, Well… Different (but also good)

What made the journey unique for teens from Camp Livingston—and made their connections with Israel personal—was an extra stop in Cincinnati’s partnership city of Netanya through the Partnership2Gether (P2G) program of the Jewish Federation of Cincinnati. For the last weekend of their trip, they set up camp with the Israeli Tzofim (Scouts) from the Ramon Tribe.

That same group of scouts spent time at Camp Livingston last summer, an exchange funded every year by the Annual Campaign, which supports P2G.

“So our campers already knew some of the tzofim and were excited now to experience their camp,” said Shira Spiegel, one of the Livingston campers’ guides.

When the two groups reunited, they reminisced by sharing Livingston traditions—games, songs, and cheers. That shared past experience broke the ice and brought them all right back to where they were last summer.

“As soon as they arrived, we showed them everything we had built and made a Kiddush with all the special songs from Camp Livingston,” said Shani Avinoam, a camper from the Ramon Tribe who went to Livingston last summer.

The campsite for the Ramon Tribe was very different than any kind of camp in the United States.

“Camp Livingston has cabins and set activities that are all right here, all the time,” Sam said. “In Israel, the scouts go to a different location every summer, and they build everything themselves. They make their own shelters and their own kitchens. And then they take everything down and leave no trace.”

While it was a very different experience than the typical Jewish overnight camp in the US, Sam said he and the other the Livingston campers really enjoyed it, and the tzofim made them feel welcome.

That Friday night, the group stayed overnight at camp—which was the tzofim’s last day there. While the Israelis tore down on Saturday, the Americans enjoyed the surrounding area. They went for a hike through an aquifer in Mount Carmel with Adi and Asaf, Cincinnati’s new Chaverim M’Israel (Friends from Israel). They spent some time on the beach in Netanya. And enjoyed the best food of their trip (something different than the rice and chicken they had come to expect after four weeks on the road).

When the tzofim were finished breaking down, they picked the Livingston campers up and took them to the scouts’ homes. Each tzofim’s family hosted two or three Americans.

Sam said this was one of the best parts of the trip.

“This gave me a taste of what life is really like and what people are like in their normal lives,” he said. “They were really nice and welcoming. They spent a lot of time with us—talking, playing cards, and watching movies. And they cooked for us authentic Israeli meals.”

“When these campers were younger, they saw the Israeli scouts at Camp Livingston every summer,” Shira said. “They may have had a few conversations with them, but then the scouts left, and they never saw them again. But now, here they are in Israel, staying at the scouts’ houses, and camping alongside them. They are learning that these connections don’t have to be a one-time thing. They might continue the rest of their lives.”

“The experience was really special,” Shani said. “We keep in contact to this day, and some campers even plan to return to Israel in the future!”

“This experience is invaluable for our teens,” said Abby Solomon, Assistant Camp Director for Camp Livingston. “We have seen over and over the value of Israel travel, especially at this transformative time in their lives, and adding the weekend in Netanya with P2G allows our teens to grow and learn about Israel in a way we just could simply not provide our campers otherwise. They return to camp changed and inspired by what they experience with their Israeli peers.”

Participation on this trip for Cincinnati students was funded by grants from The Jewish Foundation of Cincinnati, administered by the Jewish Federation through Cincy Journeys


Stay connected to our news and stories: sign up for our newsletter here.

“Here they are in Israel, staying at the scouts’ houses, and camping alongside them. They are learning that these connections don’t have to be a one-time thing.” –Shira Spiegel, chaperone of the Camp Livingston Trip