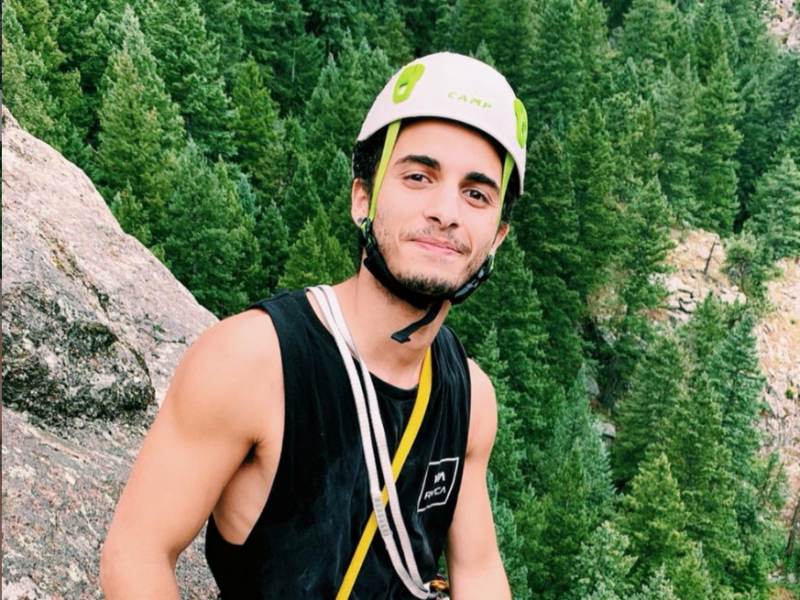 From Chaver to CEO: How Time in Cincinnati Changed Alon Peretz’s Life

“For me, everything that I have become, everything I am doing, can be traced back to Cincinnati,” said Alon Peretz, who took part in the Chaverim M’Israel program from 2016 to 2017. This highly sought-after gap year program allows Israeli students to come to Cincinnati to teach about Israel before entering the Israeli Defense Force (IDF). Two students are selected to be part of the program in Cincinnati, but some cities have as many as a dozen students, while others have only one. At the national level, the program is run by the Jewish Agency for Israel; at the local level, it is run by the Jewish Federation of Cincinnati.

We wanted to catch up with Alon to see what he has been up to since returning to Israel and joining the IDF. In a recent video call, we learned that life has thrown some unexpected curves Alon’s way, but he has made the most of them and has thrived as a professional rock climber and now CEO of his own company—all thanks, he says, to his time in Cincinnati. I hope you enjoy this interview, which has been edited and condensed for clarity.—Jennifer Clark, Community Building Associate, Jewish Federation of Cincinnati

Jennifer Clark: You served our Cincinnati community from 2016 to 2017. What are some of the things you remember most about your time here?

Alon Peretz: You know, when you spend a year in Cincinnati, you feel you’re at the top of the world. For some reason, everyone seems to look up to you as a Chaverim. There is a legacy of people who have come before you, and you have to live up to their legacy. Imagine getting drafted into the NBA and you’re given number 24 on the Lakers [Kobe Bryant’s number], there’s a lot of legacies to live up to up to. It’s the same with the name Chaverim. While I was here, I was hosted by Lisa and Josh Zelvy, and Abby and John Youkilis. I also spent a lot of time at Sharon Spiegel’s home with her family. [Spiegel is the former Director of Youth Israel Experiences at the Jewish Federation of Cincinnati.]

JC: You were very excited to enter the IDF after returning to Israel, but something unexpected happened. Can you share about that experience?

AP: Unfortunately, I fell down 12 stairs and dislocated both of my kneecaps, and had to leave the IDF. I was devastated. It was like a snapping moment. While I was in Cincinnati I lost two cousins, my grandma, and a friend. I was close to Phyllis Binik-Thomas in Cincinnati. She was one of the most inspiring people I had ever met; she was a comfort for me when I was experiencing those losses, and then she passed away from cancer while I was still in Cincinnati. Once I was back in Israel and was part of the IDF, it was like, “Okay, now I can clear my mind and be okay.” Then six months later, I got injured and couldn’t serve my country. I felt like a hypocrite because for a full year I’d been in Cincinnati talking about Israel, saying that I’m going to serve in the army. I lost a friend in the war. My brother served—and not being in the military devastated me. I felt like I lost my identity. I didn’t know who I was anymore. I felt like a piece of glass someone smashed on the floor.

JC: What happened after your injury? What helped you pick up the pieces of smashed glass?

AP: I lost my ability to walk when it first happened—it took about four years for me to recover fully. One of the things I got interested in during my time in Cincinnati was rock climbing. I was a surfer in Israel, but I couldn’t find any waves in Cincinnati, so Sharon’s son, Jacob, introduced me to climbing. And while I was recovering from my injuries, I began climbing again. It was a process, but I gained my personality. I learned to understand who I am and what I am capable of—through climbing—through pushing myself to go 3000 feet in four days or just being in those epic places and seeing crazy views and climbing with people from all over.

JC: And it was that passion and skill for rock climbing that brought you back to Cincinnati?

AP: Yes. About three years after my injury, I flew back to Cincinnati and bought a van and spent about two weeks renovating it with my host families. It was great seeing everyone and catching up. I had the chance to go to my old climbing gym in Blue Ash, and the guy who used to climb with me all the time, his name was Kenny, when he saw me he started going wild! I was so honored that he remembered me; I told him how much his support meant to me, that I was able to become a professional climber, and told him the places I’ve been and things I’ve done. You know, saying “thank you” can be a powerful tool if you know how to use it. Once we got the van rebuilt, I crossed most of the United States in it, ending in Yosemite National Park. A documentary is about to come out that starts shortly after my injury and ends with that climb.

JC: What made you want to stop your professional rock climbing career and get into the tech startup business?

AP: Look, I’m handicapped. My body is not 100 percent. Yes, at one point, I had six sponsors, but making money from climbing, living the way that I want to live, is not possible. Plus, I knew that I’m capable of way more than doing a one-arm pull-up—I can talk to people. I can influence people. If you look back at all of the Chaverim that served in Cincinnati, they’re all geniuses, so I understood that someone must have seen something in me if I had been chosen to be part of that program. It’s kind of like a superhero story; they showed me how to use my powers and I understood that I could do way more than just climbing. I can have bigger ideas. I want to change the way that you and I and everyone sees this world. Now I’m CEO and founder of a tech startup in the insurance field. The idea for the company started because two of my friends died while climbing. I realized we needed a communication solution, so we developed an RF [radio frequency] system for communication over long distances. The way I look at it, everything I’m going to develop or work on will impact people’s lives. I have lost so many people and don’t want anyone else to lose someone from unnatural causes. My brother is my business partner, and he is also a former Chaverim. We even lived in the same room with the same host family: the Youkilises. He and I talk a lot about how we can handle meetings today, thanks to Sharon [Spiegel]. She helped us become professionals.

JC: Was your brother’s experience as a Chaverim what influenced your decision to enroll in the program as well?

AP: Yes. He was the one who kept telling me I should try it, and I kept telling him, “no, I don’t want to. I want to join the IDF.” Then at one point, I was like, “Why am I fighting this?” He pushed me to that, but I wanted to do something like volunteer—give back in some way—and I’ve been lucky to give at the highest level. There’s a big argument in Israel: should you spend your gap year giving in Israel or outside of Israel? The way I see it, if you want to take care of the inside, you have to make sure that the outside is okay. I call my time as a Chaverim my military service because I served to protect Israel outside of Israel. That’s the way I define my service.

JC: It sounds like Cincinnati was a major influence in your life and all of the choices you’ve made since taking part in the Chaverim program. Where do you think you would be without this program?

AP: Oh, wow! I’ve never thought of that before. I’ve wondered where I’d be if I hadn’t been injured, but never a version without Cincinnati. Honestly, I don’t see any version of myself that didn’t come through Cincinnati. I feel like it was always meant to be. Cincinnati is as much a part of me as Israel is. I gave my heart and soul to this community, and I want to thank every person I interacted with. You all changed my life. Look at me today. That’s thanks to you.

JC: What’s next for you?

AP: Do you know the Forbes 30 Under 30 list? That’s where I’m going to be. I want to create a working space for scientists, physicists, doctors, artists, photographers—you name it. I want to take the top minds of this world and put them in one building with every single resource. They need to create stuff that will change people’s lives. That’s what I want to do. I want to take my capability to do business and help those smart people change people’s lives. For me, it’s not about the materialistic stuff. I’m just curious about how much I’m capable of as a person. I want to see my limit. It took me four years of rock climbing to become one of the best. I want to see what’s up next.

JC: What would you say to future Chaverim?

AP: Do you know when you go on a rollercoaster, and the big drop comes, and you’re calm right up to the moment it starts to go over the hill, then all you can do is hold on and enjoy the ride? That’s kind of what being a Chaverim is like. You have to be present at the moment; you have to respect those around you and who came before you. But you have to understand you were chosen for a reason. There’s something special inside of you, even if you can’t see it yourself.

JC: Summing up, what did your time in Cincinnati give you?

AP: For me, everything starts with Cincinnati. My passion for rock climbing, my belief in myself. The fact that I’m capable, at the age of 22, of founding a company, to go to raise millions of dollars, is all because I was in Cincinnati when I was 18. I had to stand up for my country; I had to learn how to meet people where they were and share different thoughts and opinions. I once spoke to a member of the KKK about Israel—if I can do that, selling a product is easy by comparison. I learned three major lessons in Cincinnati. One: There is way more than one way to live life. Two: Everyone in your life has a purpose, even if it’s setting a poor example. Three: Family doesn’t have to be blood to be family.

“Saying ‘thank you’ can be a powerful tool if you know how to use it.” —Alon Peretz, former Chaver M’Israel