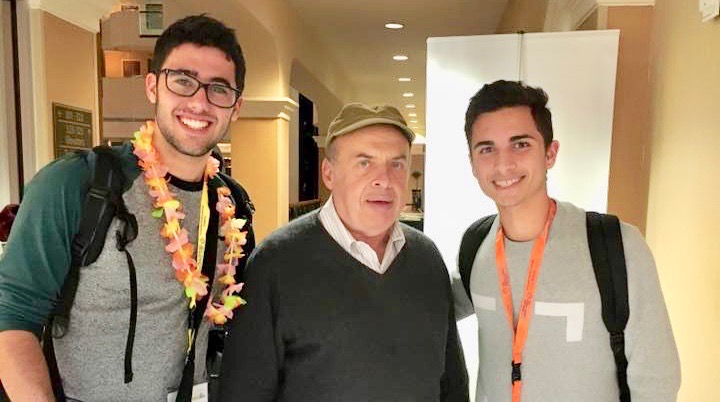 Alon, on the right, and his friend Noah Korina-Gilady, currently a chaver in New Jersey, with Natan Sharansky, head of the Jewish Agency for Israel.
January 23, 2017 | 0 Comments
Tweet
Share44
Share
44 Shares

A Part of Something Bigger—by Alon Peretz

Alon Peretz is one of our two new Friends from Israel, or Chaverim M’Israel. I am giving him, and our other Chavera, Hadas Silver, some space here regularly to share how their year is going. You’ll also see these posts in the Israelite, and can follow Alon and Hadas’s adventures on Facebook. —Maia

Hi guys! If you’re reading my second blog—welcome back. And if it’s your first time, then welcome aboard! (I’m using that term because I am literally on an airplane as I write this.)

I’m sure you’re all wondering why I’m calling this blog “A part of something bigger.” To help me explain, let’s do something together, ok?

Think about a time you felt you were a part of something bigger than yourself.

I don’t have to think for long about that moment for me. I just came back from a shlichim (Israel emissary) conference in Washington DC.

So what is a shlichim conference, you wonder? (I did too.)

Let me give some background. Right now, there are 300 Israelis whom the Jewish Agency for Israel trained for six months to be shlichim, or Israel emissaries.

Ranging from 18-year-olds like me, to 26-year-olds like our amazing Israel Fellows at Cincinnati and Miami University Hillels, and all the way to people that come from Israel with their entire families, like our amazing community shlicha, Maia Morag—these Israel emissaries come to communities across the US to teach about Israel and to build bridges between the two countries.

And guess what: I didn’t understand what they meant. (Seriously. Learning psychology was easier for me!)

When those six months were up, I was placed in the best Jewish community. I’ve now been there for three months.

Can you guess which community I am talking about? CINCINNATI of course!

Then, on November 13, I found myself in Washington DC at this shlichim conference. I saw all of my friends—it was so much fun, and it really felt like home.

At dinner one night, I walked into a room with another 300 people who all shared that same vision that the Jewish Agency had articulated to me—“bringing Israel alive” and “creating a partnership between Jewish communities abroad and the Jewish community in Israel.” And that’s when it hit me. Suddenly, it wasn’t just me and hundreds of my friends in that room. It was me and hundreds of my friends who left their homes with the shared goal of “building bridges between communities.”

But there were some experiences that I realized were totally unique to my situation as an emissary in Cincinnati:

So you’re probably wondering: what happened to feeling a part of something bigger?

Well, I felt it at that conference. I felt part of a much larger Cincinnati community, because, without even realizing it, I was “showing off” Cincinnati to all of my fellow emissaries.

I felt it because I was a part of a group of 300 people who came together because of a vision, not just because we are friends.

I felt it because I am part of an incredible tradition in Cincinnati. The amazing emissaries before me did a great job bringing Israel alive for the same kids I’m teaching today. And that’s not the end, because I know that the emissaries who come after me will do great job, too.

When I got back to Cincinnati, I said something that caught me by surprise. I said, “Ahh, it feels so good to be back home!”

Wait. To be back home? In Cincinnati?

I felt part of a much larger Cincinnati community, because, without even realizing it, I was “showing off” Cincinnati to all of my fellow emissaries.