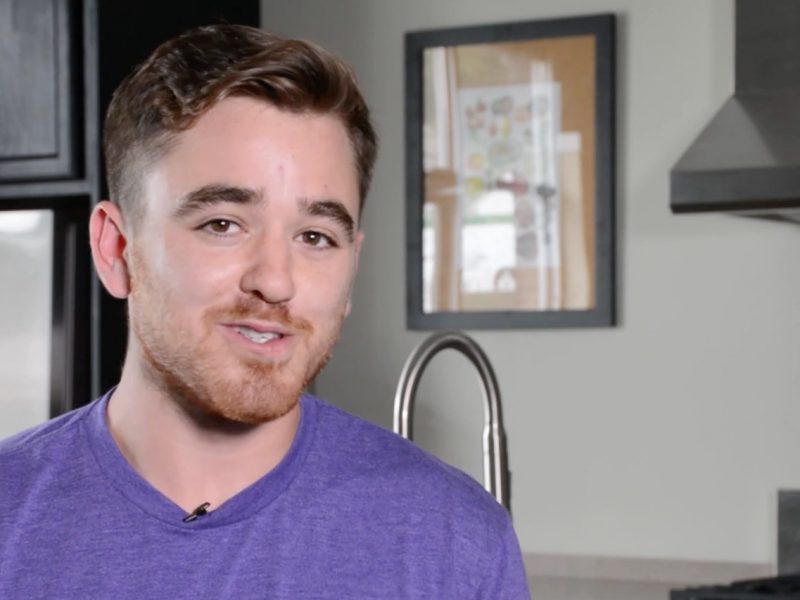 David Litvin found his dream job, which combines IT and farming, with the help of JVS Career Services, which is supported by the Jewish Federation of Cincinnati.
April 25, 2018 | 0 Comments
Tweet
Share
Share
0 Shares

How You Help: How an Israeli Transplant Found the Perfect Mix of Career and Passion

“When I told David there might be an IT opportunity in farming, I thought he was going to fall off his chair,” said JVS Career Services Senior Business Development Manager Sherry Gordon. “He couldn’t believe it. I contacted 80 Acres CEO Mike Zelkind, and within an hour, David had an interview.”

JVS Career Services aims to find that sweet spot where qualifications, openings, and passions collide. That spot couldn’t have been sweeter for David Litvin.

Litvin moved from Israel to Cincinnati with his fiancé in December of 2016. The two met working with an Israeli Scout program. They moved to a kibbutz, where they lived with 50 others; several years later, all 50 joined the Israel Defense Forces (IDF).

Fresh out of the military and ready to begin life in the United States, David’s fiancé began school, and he started looking for a job. He got off to a slow start.

“It didn’t really work out,” he said. “I couldn’t find anything that really interested me. I was looking at jobs in IT or cyber security, but I’m also interested in farming.”

On the kibbutz, Litvin harvested dates as well as built and tended to botanical gardens. While in the IDF, he volunteered on a number of volunteer agricultural projects on his weekends off.

He couldn’t find many openings in Cincinnati that interested him, and the interviews he went on didn’t go very well.

“The interview process in Israel is very different,” Litvin said. “Here it’s a lot more formal, and you need to be intentional about what you say.”

Finding an opening he was interested in was quick, but preparing for the interview took a little longer. Sherry Gordon helped Litvin hone his interview skills. She helped him develop his resume—from creating the proper layout, to narrowing down his job experience to just the essentials, to developing a punchy cover letter.

“From the moment I stepped in the door, Sherry made me a priority. She made me feel comfortable enough to come back and get the training I needed to find a job,” Litvin said.

So he got to work, preparing for his interview at 80 Acres, a hydroponic farm in Spring Grove Village that provides pesticide-free local vegetables year-round from an indoor farm. Hydro– as in water. There’s no dirt at this farm. It uses technology to create a perfect growing environment and to produce fresh vegetables that go from farm to table in a matter of days, without the need for washing.

CEO Mike Zelkind was eager to interview Litvin. He had given JVS Career Services a tall order—someone with IT and back-office experience, but who knew something about growing vegetables—and they delivered.

Zelkind says they put Litvin through the ringer during the interview process, but that he was phenomenal.

“He’s bright, has a great work ethic, and is a tremendous member of the team,” Zelkind said. “When we hired David, we were looking for someone with the right attitude; the ability to be honest and transparent about what he didn’t know; the ability to adapt and problem-solve; and a knowledge base in advanced technology components, biology, and IT.”

A tall order, with a worthy candidate. A great match.

Litvin is now several months into the job as one of three growers at 80 Acres, responsible for cucumbers, tomatoes, and peppers. He ensures they’re growing properly and that there aren’t any diseases or deficiencies. He uses his tech skills to create a highly controlled environment—managing the lighting, humidity, temperature, and more.

“All three growers bring different things to the table, but collectively, they’re incredibly powerful,” Zelkind said. “In this case, 1+1+1 does not equal 3—but something more like 10. David’s temperament, intuition, and ability to learn add a lot to the team. He’s a critical component to our success.”

For Litvin, finding 80 Acres was more than checking the boxes for both IT and farming.

“I wanted to work for a company that wasn’t a big corporation,” he said. “I wanted somewhere I could really get involved—not just another 9 to 5. I was drawn to a startup because everyone is working to build the company; everyone can bring up ideas and contribute; and you’re not stuck in a cubicle. JVS Career Services understands what you’re looking for. They found the right opening, and gave me the skills I needed to land the perfect job.”

Fresh out of the Israeli military and ready to begin life in the United States, David started looking for a job. He got off to a slow start, but then his fiancé's mother recommended JVS Career Services.