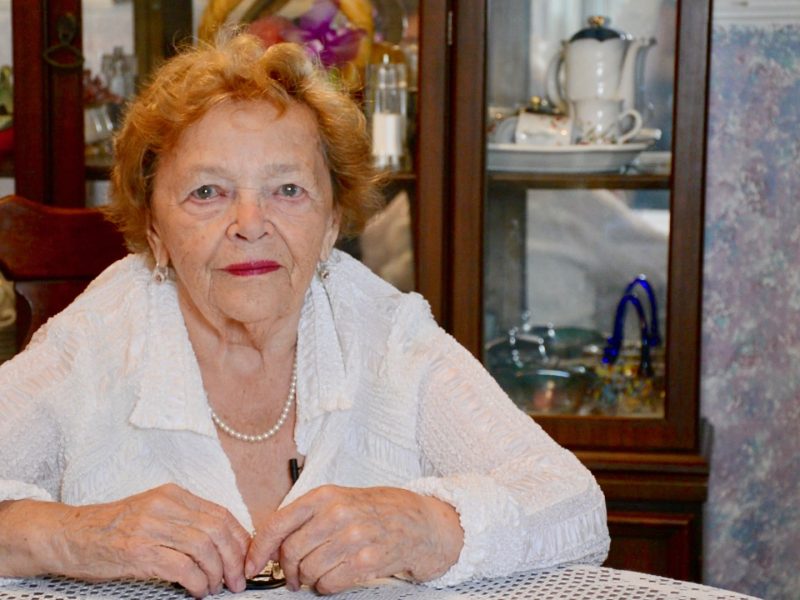 [Video at bottom of article]

On December 14, Mila Denisenko celebrated her 90th birthday at the Russian Jewish Cultural Center surrounded by friends. Speaking Russian, they shared anecdotes about her life and their history together. Some praised her well-known gift for singing. Delicious Russian-style birthday cake was served, along with much food and laughter. As befitted such a milestone, Mila received a bouquet of red roses.

In sum, it was a beautiful party with people who really understand Mila. Later, asked her favorite thing about the Center, Mila said, “I like it so much that we can communicate with each other, and that we have a lot in common, and perhaps the same way of thinking” (Mila’s quotes throughout are via interpreter).

It may look like just a room on the first floor of the Mayerson JCC—but the Center is the vibrant heart of a community about 130 strong. Run by Jewish Family Service (JFS), the Russian Jewish Cultural Center mobilizes a network of life management care and offers a steady flow of engaging opportunities for the Russian-speaking Jewish community. Funded by the Jewish Federation of Cincinnati, the Center is relatively new.

It began in June 2017, when JFS agreed to care for a vulnerable population of Russian-speaking Jewish older adults who no longer had a place to be together and to create community. All have a JFS caseworker. Roughly 60 percent are Holocaust survivors; some are decorated veterans who, as soldiers in the Soviet army, helped defeat Hitler. Many of them, including Mila, have ongoing difficulty with English.

“They deserve to live in dignity,” said Luda Gikhman, JFS’s manager of the Center. “The cultural differences matter so much. They know what it is like to be forbidden to celebrate Rosh Hashanah or Yom Kippur; and be denied good jobs, and good education for their children, because of their Jewishness.”

For Mila, such safety, freedom, and economic stability is new.

When she was a child, Mila’s family lived in Odessa. While Odessa had a substantial Jewish population and was “intellectual, with talented and gifted people, a cultural center,” said Mila, it was still problematic to express or practice one’s Judaism. “We were not supposed to speak in Hebrew and or to pray. Only at home where nobody could hear us,” she said. They didn’t celebrate Shabbat.

In 1941, when Mila was 12, the Axis powers conquered Odessa and she and her mother hid, escaping the Odessa Massacre (in which over 100,000 Jews were killed), and enduring the Nazi regime. Her biggest memory of that time, according to Mila, is being constantly on the run: cold, fearful, and hungry.

Even after the war, Mila’s family had a rough time. Having spoken out at work against the Soviet government, Mila’s mother was jailed, then incarcerated in a camp for 8 ½ years as a so-called “enemy of the people.” And antisemitism persisted. As late as the 1960s, when looking for work, Mila was asked if she was Jewish. Her aunt, a doctor, hid her Jewish identity.

As a mother with her own family, Mila lived in poverty. At one point the government officially recognized her and her son’s apartment as “unsuitable for living.” During this time, “we didn’t have a shower; we didn’t have hot water,” said Mila.

So when Mikhail Gorbachev and Perestroika opened up their chances for successful emigration, they followed Mila’s younger brother to the US, arriving in Cincinnati in 1989.

Can there be a homecoming in a new land? “In order to know what it means to live well, it turns out you need to leave your own country” said Mila. “When we share memories and conversations at the Center, we usually just end with ‘God bless America.’”

Her friends here are an important island of familiarity: they “have experienced the same life as I did. Hunger and all the hard challenges of life. These people understand what the United States offers better than anybody else.”

While Mila has family—a son who lives 35 to 40 minutes away, and grandchildren—she lives alone in an apartment in Golf Manor, and enjoys the Center almost every weekday. Mila says the Center’s staff gives everyone “a lot of attention and a lot of care, so that everybody feels important and has someone to talk to. Thanks to the Center, we don’t feel alone.”

The Center provides professionals who can help with bills, conversations in English with doctors, and a range of life management needs. Its social workers help with citizenship issues, translation of documents, and more. The Center counters social isolation, which can be dangerous. (According to the AARP Foundation, the health risks of prolonged isolation are equivalent to smoking 15 cigarettes a day.) The Center’s Russian-language programming includes issue-related discussion groups, poetry readings, a singing group that Mila enjoys called the Song-Lovers Club, and communal celebration of Russian Jewish holidays.

Mila sums it up, saying, “I think that the Russian Center is like a home, it gives me life. It makes our lives better. Everybody my age needs this help.”

“The Russian Jewish Center is like a home. It gives me life.” —Mila Denisenko