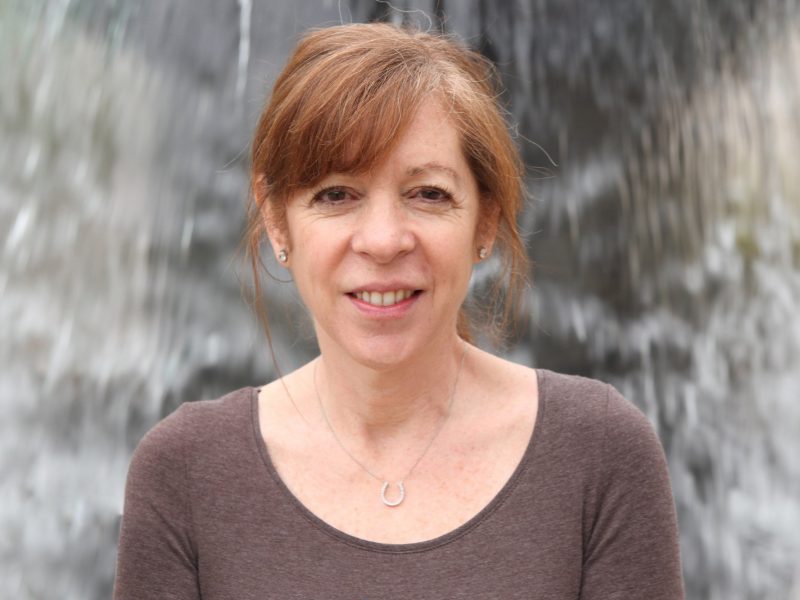 “I was in terrible shape financially, physically, and emotionally, and I was homeless,” said Leah. She had come for an interview, relaxed but engaged, four years after her time of worst crisis. Sitting alongside her care manager, Melissa, at the Jewish Federation of Cincinnati offices, her direct gaze and warm smile signal a self-confident, thoughtful inner landscape. [Names and identifying details have been changed to protect client privacy.]

Those were bad times, but Leah’s story is actually a success story, about the long road from depression and homelessness to a job she loves, a nice home in Oakley, and a calm self-esteem.

Leah managed to travel that difficult path thanks to her own strength—“I just didn’t want anything getting in my way”—and the crucial help of Jewish Family Service (JFS), which is funded by the Jewish Federation of Cincinnati.

Originally from an upper-middle-class home, Leah had a typical childhood until her mother received a cancer diagnosis when she was 11. That changed the world for her father, sister, and herself. When Leah was in her first year of college, her mother died. After that, Leah says, her twenties and thirties “became about emotional survival. I was very fragile.” In her late thirties, she experienced another crisis when she became the primary caretaker for her father until he passed, after an illness of six years. That’s when she was diagnosed with anxiety, depression and PTSD. At her first severely emotional low point, Leah was put on antidepressants.

Following her father’s death, Leah moved to New York City, found a boyfriend and aspired to be the artist she had always dreamed of being. Her boyfriend, an older man, died after they had had 12 years together, leaving her unprepared for the financial demands of such a large city.

Leah knew she needed a big change, immediately. Try as she might, she felt “panic and literal terror” overtake her days in New York; the money from her parents had run out, she’d sold all the family heirlooms, and she was alone. She also could not walk with ease, which limited her activities and turned her mood even darker: “I was in 24-7 physical pain because for three years I'd been walking bone on bone—my hip was trashed.”

“Every time I wrote that big check for my apartment, watching my money go away, I felt shame. I felt broke and stupid,” Leah said. “I asked myself: how could I have let myself end up here?” When the money ran all the way out, the choice was to live in her car, or find a way back to Cincinnati where she knew life was at least a little easier.

Coming Home to an Empty Landscape

The change she chose was to return home. In fact, Leah was so broke she needed help from old friends even to return to Cincinnati.

But she returned home to an empty landscape. Her only remaining close relative, her sister, had stayed in Cincinnati but was so emotionally troubled and financially underwater that she was unable to help.

At 59, Leah had to start over. “I was desperately in need of a place to let down the armor, to be heard without judgment. And I had no idea of the depth of what [JFS] could offer me. I had no idea there was a community there for me,” she said.

It took Jewish Family Service’s Barbash Family Vital Support Center two years to move Leah further down her path to wellness. Two years of help with everything from food at the Jewish Family Service Heldman Family Food Pantry, to help with her job searches, to emotional support that she describes as “giving me my soul back.”

Feeling Respected in a Stabilizing Place

The Barbash Family Vital Support Center is “a stabilizing place; a place you can grow, and heal,” Leah says.

Leah received food, respect and laughter from the food pantry for over a year. Rather than being a depressing environment filled with shame, which was what Leah expected from any food pantry, the food pantry became for her a place of camaraderie, warm laughter from the helping “shoppers”, and the occasional unexpected rare food find (“The day I found a small wheel of brie was a good day,” says Leah, laughing.)

Melissa helped her get on Medicaid and food stamps. She received crucial social services, including group activities and other support. She especially enjoyed the arts and crafts, such as the beading workshops, and the yoga, where she made good friends. Melissa also helped Leah get her eyeglasses for free. Leah received coaching and care management whenever she reached out, and always received hugs, warm welcomes, and even an occasional omelet and cup of coffee when she popped by without warning—which she did for some time every day during her job search.

Melissa also supported Leah with frequent phone calls before Leah figured out how constant the care could be. Leah began her financial stabilization with a series of sales jobs, but she wanted to find something that really spoke to her skills and heart; and she finally did. She did so well she was promoted after six months—an unusual feat at her large organization—and has been employed there for two years now. She is able to save money; Melissa smiled with pride that Leah “even has a 401k!”

Leah keeps coming back to the importance of this community to her human dignity and self-esteem: “To feel respected when you are at your lowest ebb is to be rescued,” she says. She tells the story of a JFS center manager named Bonnie: “I walk in one day and Bonnie goes, are you hungry? And it was like having a mom. She said, you want something to eat? And I said yeah. And she went and made me some eggs. Wow. Having someone care at that basic level—you recognize it as grace.”

Grateful for Having Made Her Way Back

Leah’s life is now on track, and she is grateful. She lives in her very own apartment, her life is full, and she loves her job. But she loves the Vital Support Center most of all:

“It was this place that gave me my heart back, and my sense of community, and an idea that I might in fact make my way back. Which I have,” says Leah.

Leah recently wrote what she called “a love letter” to her chosen community. In it, she shared that Melissa’s help “was life-saving.” She summed it all up by saying, “JFS was like having a family to go to.”


Asked how she was helped, Leah returned to the idea of self-esteem: “Respect. Recognizing my abilities and my qualities. Recognizing that my situation did not define me. That was priceless.”

Will she be leaving her hometown again? “Oh no—I’m never leaving again.” She is clear.

Did Leah have any last words? “Yes—I think it’s absolutely critical that people know how to ask for help. Because the help is out there: every turn of this ridiculous journey, I have gotten help from people just by opening up and saying, here's my situation, and I honestly don’t know what to do next.”

“It was this place that gave me my heart back, and my sense of community, and an idea that I might in fact make my way back. Which I have.” —Leah