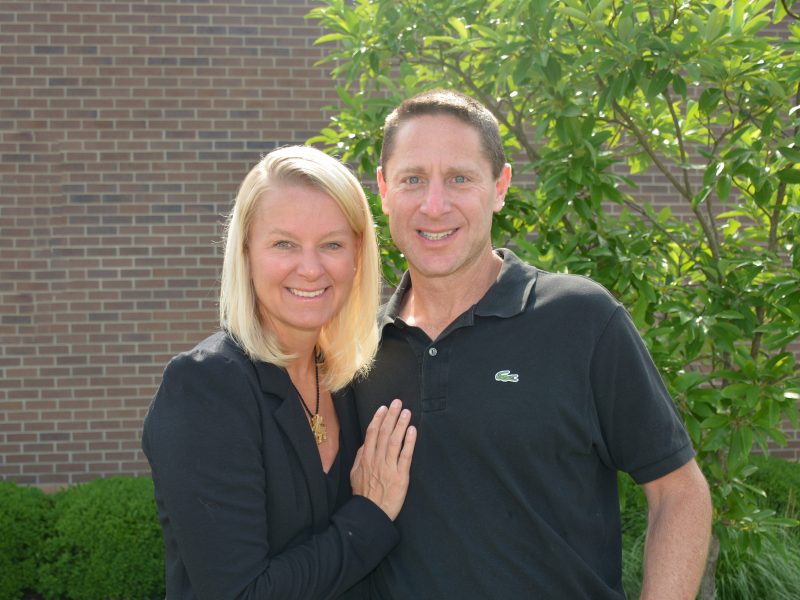 The most important thing: impact

Impact. That’s what motivates this year’s Jewish Federation Campaign cochair Chrissie Blatt. “It’s important for me to be part of something that actually makes a difference. That’s the great thing about the Federation system—we are able to work hard and initiate the change, and then get to see it actually out there in the community doing good.”

The Jewish Federation of Cincinnati’s 2020 Annual Campaign chairs, Chrissie and Josh Blatt, are proud to chair this year’s campaign. The campaign raises millions of dollars for Jewish needs in Cincinnati, in Israel, and globally; and distributes it, using a community-driven, volunteer-led process; to the programs where it will have the most impact. Under various organizational names, the campaign has been held annually since 1896.

The Blatts will have a busy time of it: on top of this intensive volunteer commitment, they have three children, attend Adath Israel Congregation, and have extensive additional volunteer commitments. The Blatts cochaired the campaign last year as well, and achieved the Federation’s campaign goal. This year however, the community has increased needs, and the annual campaign will aim to raise enough funds to meet that higher level of need.

This year’s theme is Rise up, do good

“The theme for this year is “rising up,” because we want the whole community to step up and help, or step up and be helped, if they need it,” said Josh. Chrissie added, “Everyone can make a difference, whether through gifts or giving of our time and energy. I hope that we will continue to inspire people to do that.”

What Pittsburgh showed us

Asked what they noticed about last year’s campaign compared to what they anticipate for this year, the Blatts immediately noted the shock of the Pittsburgh terrorist attack in October 2018. It changed the whole year, said Josh. “We as a Federation have always planned for security, and had security measures in place. And I think we all looked at them, frankly, as probably unnecessary. It was a really, really scary moment, and it highlighted the fact that our community was planning, it had been doing the things that needed to be done to keep us safe.”

Chrissie agreed: “We saw in real time last year how quickly our Federation can administer aid and assistance, and support whatever the community needs. Sometimes we forget that when we’re in good times.”

Both recalled the power of the community vigil at the Mayerson JCC in memory of those killed in Pittsburgh. “We came out a half hour early, we’re getting off the highway and the highway’s backed up on both sides. There’s almost no parking left. The room is overflowing with standing room only, then, organically, a new vigil developed outside to accommodate the crowd. It was an amazing, amazing moment for our community coming together,” said Josh.

Chrissie saw the power of Federation after Pittsburgh: “It’s really easy to say we’re feeding so many people, but sometimes it’s hard to see that impact. With Pittsburgh, you saw immediately the gravity, the impact of what we’re doing. The whole infrastructure was there, ready to go. It really solidified our belief in the Federation here and what we’re doing.”

Looking ahead and rising up

Asked about this coming year’s vision, Josh said, “The plan is to continue to help those in need, and also help those who want to give find ways to do that.” Chrissie added, “We also want to help people find a way to help themselves. We want to give them the tools for stabilization or security; tools to fight whatever is holding them down.”

Chrissie contrasted helping those in need with the role of the giver. “The other part is, for the people who can, the “rising up” to making a difference in our community,” she said. “We know it’s not only about money—giving of yourself is just as important. And it really does feel good. You’re sitting in your car driving home, and you’re thinking, Wow, I should do more. That was amazing. The Federation helps our community to get that feeling of being a mensch and going out there and helping others.”

As the interview drew to a close, Josh had the last word on how being so busy and involved feels: “I hate to say this, Chrissie, you can kick me under the table. But it’s been fun—we get to work with a lot of great people who share our values and want to build a more vibrant Jewish community.” So the interview ended with pride and laughter.

“The theme for this year is ‘rising up,’ because we want the whole community to step up and help, or step up and be helped, if they need it.” —Josh Blatt, 2020 Annual Campaign Chair