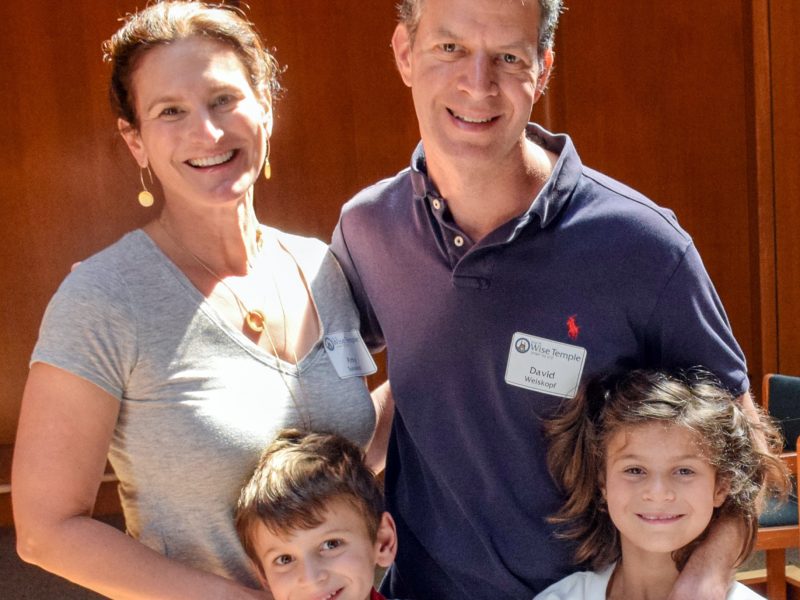 Amy and David have two young children and very busy lives—but are still finding time to volunteer in the community and are finding a budget to give generously. We are grateful to them for all they do.

David and Amy “met” at the Isaac M. Wise Temple. They were both in grad school, David was visiting his beloved grandfather, and Amy was back home for the High Holidays. David’s uncle called Amy’s mother, telling her his nephew had noticed her daughter at synagogue and asked if Amy would go on a date with David. Amy graciously declined, but they stayed in touch via email and met over the winter break.

About eight months into their relationship, David reluctantly told Amy that his uncle had completely embellished the story about him noticing her. By that time, Amy didn’t care.

They lived for more than 15 years in Washington, D.C. before deciding to move to Cincinnati in late 2012 as an “experiment”—and stayed.

Why They’re Involved: Bringing Meaning into Their Family

While in DC, their Jewish identity was not a big part of their life. When they had kids, they started getting the PJ Library books and mimicked some of the traditions from the books, at their daughter’s request. Amy’s parents helped foster their Jewish identity, and their journey started in earnest at that point.

In Cincinnati, they found a community that was welcoming, diverse, and dynamic. Participating in various aspects of Jewish life in Cincinnati was an opportunity for them to deepen their connections outside their everyday circle and bring meaning into their family life.

They went on the 2015 community trip to Israel, and the experience was transformative. David now cochairs the Israel and Overseas Committee. Amy, a veteran volunteer at the Federation, will chair the upcoming Community Campaign and is on the JCRC board. Amy said of their volunteer work, “We get more than we give.”

What They Support and How They Do It

An economist, David said simply, “I just believe it’s one’s duty to give back and do what you can to help others.” Amy added, “And truthfully, it feels good.”

Amy watched as her parents rejected some of the luxuries they could have afforded but chose to give a significant percentage of their income instead. That had an impact on her, and now, she and David are bringing that mentality into their home, even teaching their kids about the importance of giving. They gave each child a money bank with three compartments—one for spending, one for saving, and one for giving to others in need.

When asked about her legacy gift, Amy responded, “It’s an easy way to give in a bigger way. At this phase in our life, we can’t contribute all that we want to give right now. However, having a father who is an estate planning attorney, I know that it’s not difficult to make sure your family is protected while also making a future gift to the community.”

Asked their advice for others, they thought for a second about what they would want future generations to take of their values, and agreed with each others’ spontaneous statements: “Always look out for the other. Protect those in need. Be kind and generous. Be part of the broader community.”

“It’s an easy way to give in a bigger way. At this phase in our life, we can’t contribute all that we want to give right now. However, having a father who is an estate planning attorney, I know that it’s not difficult to make sure your family is protected while also making a future gift to the community.” —Amy Susskind-Weiskopf