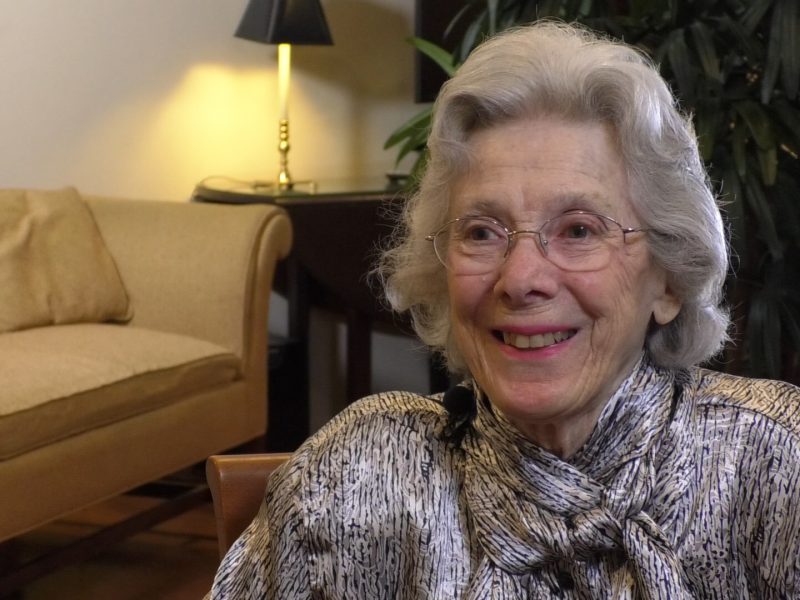 Why I Give: Generations of Giving Helped Shape Cincinnati Native

Tulane is feisty and energetic, despite the walking boot on her right leg. She arrives for the interview on a blue scooter, wearing black slacks and a shimmering silver blouse. To say she was excited to share her ideas of what it means to be Jewish would be an understatement. At the age of 89, according to Chartock, you have a lot of things you want to share.

“My folks moved to Cincinnati in the late 1800s or early 1900s. Both sets of my grandparents lived here. My dad was one of nine, and my mom was one of five, so I was very lucky to grow up in a large family. On Pesach, we would have tables set up from the dining room to the living room to the family room. They just went on for miles.”

Tulane said she was lucky to be surrounded by so many aunts and uncles and cousins but pointed out the two sides of her family were very different; her mother’s family was very Americanized, and her dad’s family was very European. “My dad’s parents only spoke Yiddish, and I couldn’t understand them. They could understand my English, but they couldn’t speak it.”

The one thing that connected both sides of her family, said Chartock, was their Judaism, and their involvement in the community. Tulane remembers her mother getting dressed up to attend luncheons and other meetings. “As for dad, I remember he did a lot of Federation work.”

“By the time I was old enough to give back, Cincinnati had translated the Jewish value of ethical living into an organized community framework of paid workers and volunteers. Decades later, these agencies are now serving Jewish and secular communities worldwide.”

Tulane was proud to share that she was born in Jewish Hospital in North Avondale and has spent her entire life in Cincinnati. She said the only time she has been away from this city was when she attended the University of Michigan to become a social worker.

Tulane’s Marriage and Own Family Traditions

It was while riding the train back and forth from Cincinnati to Ann Arbor that she met another Cincinnatian, Saul Scott. During their trips, Saul would often talk about his friend Jack. “I felt like I knew Jack pretty well by then, just from what Saul had told me on those train rides. So when Jack called me for a blind date, I said yes, because I had heard all of these great things about him.”

That blind date led to a 64-year marriage and two sons, one of whom is now a doctor and another is a lawyer in Boston.

Jack’s childhood was very different from Tulane’s, and that experience helped shape both of their outlooks as adults. “His family was not well to do. His father had suffered during the Depression. He lived in 17 different homes in North and South Avondale. His family couldn’t afford rent, so they just kept moving. Jack was able to go to college thanks to a Workum Scholarship Fund. After learning about what life was like for him growing up, my values changed.”

Tulane and Jack raised their sons in Cincinnati, surrounded by family and community. “We decided it was important that our kids be involved in the synagogue. They attended services, joined groups, and went to Jewish overnight camps.”

Tulane’s first and only job was at Jewish Big Brothers. “That was in 1951. Those were the years families were coming from the relocation camps in Rome and other places. I really got an idea of what was happening and what an impact the Jewish agencies were having. My caseload was about 32 families. I would say a third of those families were just coming over from the camps. It was really eye opening. They had nothing. The community came together to provide housing, medical care, food, clothing, schools. Everything.”

That year, 1951, was also the first year that Tulane started giving to the Jewish Federation—and she hasn’t ever skipped. Being Jewish, giving back, and being involved with the community have always been priorities for Tulane. “I felt it was my turn and responsibility to look for ways to fill other’s needs.”

She said being able to see firsthand the work the Jewish Federation of Cincinnati does in support of other organizations made it easy for her to donate, which she has been doing for nearly 70 years. “I know where the money is going. They are working every day to make our community better. I hope my generation is remembered for keeping the framework, the agencies, available for the next generation.”

Tulane considers herself a link in a long progression. “I have the legacy that people left me, and what I leave for the next generation is what they choose to take. I want my grandchildren to know Judaism. To understand it. To respect it. I want to be that link in a long chain of worthwhile living. I don’t know what kind of world my grandkids are going to grow up in, but I hope they can adapt their Jewish values to whatever situations they may face.”

“Being Jewish is about giving back. It’s about culture. How you treat people. Mercy. Justice. These are big words, and they encompass so much. To be Jewish is not just one thing. It’s a religion. It’s a culture. It’s a guide for life. It’s just everything.”

And with that, Tulane smiled, lighting up the room with her energy. She swiftly stood from her chair and transferred to her scooter (what broken foot?), and was off to her next appointment.

“Being Jewish means everything to me. It’s in my every cell. I know I’m Jewish. Every day it affects me, my identity.” –Tulane Chartock