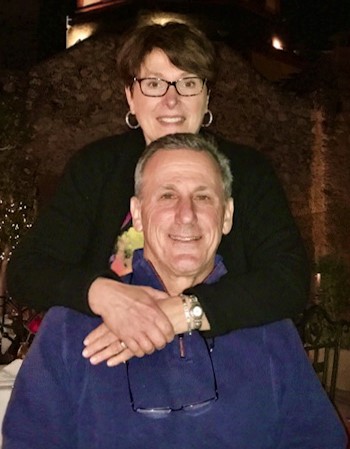 For the Shullers, being a part of a vibrant Jewish community has created a sense of belonging and deep connection to their Jewish roots
November 17, 2020 | 0 Comments
Tweet
Share
Share
0 Shares

Why We Give: Don and Jan Shuller Volunteer to Help Create a Stronger Community

For Jan and Don Shuller, taking an active role in their Jewish community has always been a family affair. “Don’s father is 95 and has been giving charitably his entire life,” said Jan. “In many ways he personifies what it means to be truly altruistic.”

With the example set by Don’s father, the couple has spent years volunteering in the community, working to create an even better Jewish Cincinnati for future generations. “You need to support your community,” said Don. “When you give your money to an organization like the Federation, that money may be spent on things that you don’t have a personal interest in, but that’s okay. The community is stronger for it, and it wouldn’t be as diverse without the support of everyone.”

Don was born at Jewish Hospital and grew up in the Ridgewood neighborhood near Amberley, while Jan grew up mainly in Virginia, outside of Washington, DC, where there weren’t that many other Jewish families. Jan said that living in Cincinnati with a well-established Jewish community provided her a sense of community she always lacked growing up. “The cultural aspect was always there. We did the food, we celebrated the holidays, but we just never had that community to support and surround us.”

Jan and Don met at the University of Virginia and were married during his final year of law school and her final year of undergrad. The couple moved to Columbus, Ohio, when Don took a job with the law firm he would end up working at for the next four decades. When the firm opened a location in Cincinnati, Don volunteered to move so he could be closer to home. “Our oldest daughter was about a year old,” said Jan. “Having Don’s parents nearby to help with babysitting was a great incentive.”

The couple has belonged to Wise Temple for more than 20 years and have been active volunteers with numerous organizations within the Jewish as well as the broader community. Jan sat on the boards of the Jewish National Fund (JNF), the America Jewish Committee (AJC), and the Glen Manor Home for Jewish Aged, which would later become Cedar Village, and also volunteered at bingo nights. “I would take our daughter, who was four at the time, to play bingo,” Jan remembered. “I’ll always remember it because she would win too much and the residents would get so aggravated! How do you tell a four-year-old she can’t win?”

“Since I retired five years ago,” said Don, “I’ve been volunteering even more.” He sits on the boards for AJC, Cincinnati Hillel, and recently rotated off of the Federation board. “I’m also involved with a small organization called Philada,” he said. “It provides housing subsidies to elderly indigent Jewish people.”

In addition to their volunteer work within the Jewish community, the couple volunteers as Court Appointed Special Advocates (CASA) with ProKids. They are currently working with three children who are in the process of being adopted. “You’re looking out for what’s best for them,” explained Don. “You make sure they’re making the right kind of progress in school, help them get therapy if they need it, and generally advocate for what’s best for them.”

When asked what organizations he chooses to get involved with, he said with a smile, any organization that asks for his time. “That’s the beauty of being retired, I can do whatever I want whenever I want. It’s very freeing not having to work for a paycheck,” he said. Then Jan added, with a laugh, “just don’t give his name out to anyone else!”

“Of course we miss our family, but I can’t imagine what our life would be like without this community,” Jan added. “It was such a good decision to move here all of those years ago. It’s warm and inviting to be here, and we hope that we can share that with other people too.”