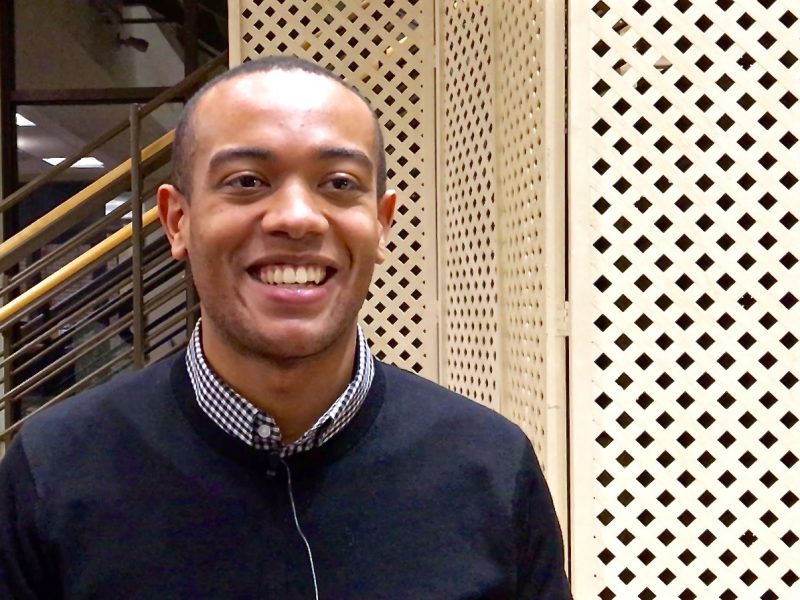 How You Help: “What I Brought Back from Israel:”  Interview with a UC Student Leader

Why did Ryan James, who is not Jewish, make the choice to go to Israel this past January? A junior at the University of Cincinnati, Ryan James is an African-American student leader, the Student Government Diversity/Inclusion Chair with multiple other leadership roles. He is majoring in organizational leadership with plans for a master’s degree in public administration.

The answer is that James has an ongoing relationship with Cincinnati Hillel. Through Hillel, he has solidified friendships and attended two conferences: AIPAC and the David Project’s Black-Jewish Summit. On January 8, James returned from a 10-day trip to Israel specially designed for non-Jewish student leaders. He was one of eight from UC who went, including one Jewish student, a Hillel intern. The trip, Israel Uncovered, was organized by the David Project and partially funded through the Jewish Innovation Funds of the Jewish Federation of Cincinnati. The student leaders were selected by Cincinnati Hillel, which the Jewish Federation also funds, and Hillel’s Israel Fellow staffed the trip.

Cincinnati Hillel’s program is nationally recognized as successful. “Because of the quality of the students that we send on this trip,” said Sharon Stern, Executive Director of Cincinnati Hillel, “we have been designated a flagship campus for the David Project, and were named ‘Campus of the Year’ in 2017.”

I sat down with James after he spoke at a recent Federation board meeting to talk about his recent experiences.


Minson: Can you tell us why you decided to go to Israel?

James: After going to [the AIPAC and Black-Jewish Summit conferences] I really wanted to learn and grow more. I was very hungry for more answers. [So I applied and went on the trip.] And it was amazing—I just got back about a week ago [laughs] so I am still processing everything.

Minson:  How was it?

James: We had amazing experiences: we stayed in Tel Aviv, Jerusalem, Haifa. Especially the Old City was amazing with such iconic and cherished religious sites. Every part of that trip was just absolutely beautiful. It gave me the chance to get up at 7 in the morning and not go to bed until midnight, and every minute of the day was new food, new opinions, new people. Seeing so many people with so many different opinions who all wear the Israeli flag so proudly is so eye-opening.

Minson: How is it to be back?

James: I still feel like I have a lot of questions—that’s probably a through-line through all of this. [But] it’s been completely influential in my life. I think Hillel has done something fascinating, which is reaching out to students who have diverse interests and who are bouncing around doing a lot on campus, because that gives us the ability to learn, and then the second half is challenging us to engage with others on campus. Hillel has really given themselves first, and let that lead to authentic sharing. There’s been such a good reception to that in our community. I think that has been absolutely influential on our campus.

Minson: Can we take a step back? What was your relationship with the Jewish community before Hillel?

James: I had had no real touches with the Jewish community in any way shape or form. I grew up in Columbus Ohio, in a suburban community. I didn’t realize how much antisemitism was present, I didn’t know a lot. I didn’t know that there were people in 2018 now as I’m speaking to you that believed that Jewish people had horns. That connected specifically to an experience my mother had where she was actually punished at her elementary school because students looked into the stall while she was using the restroom because they believed that she had a tail. And then when the situation went to the teacher she was punished instead of the other students.

What spoke to me is the parallels between the African-American community and the Jewish community. I think there is a lot of kinship among minority communities.

Minson: So what did you take from this trip?

James: College is about figuring out one’s identity. I am still learning how I feel about everything and interacting with the world. But being challenged to forge your own opinion on an experience that there is so much energy around, forces you to figure out where you stand. Coming back from Israel I learned just as much about myself and where I stand, with life.

Minson: So where do you stand?

James: [Pause] I think for the first time I am smart enough to know that I don’t know everything. Experiences are so layered and so dynamic there. But seeing how despite the strife that exists, seeing some of the most close communities that I have ever seen in my life and that maybe I will ever see in my life—that’s what came home with me more than maybe anything. If you walk into a store and you have a question someone will answer it not because they want you out of their store but because there’s a very unique dedication to the common good there.

We were given narratives that were completely disputed by other speakers. But with that combat and that sparring, it’s not attached to real divisiveness like you think it’d be—it’s over dinner, where people are authentically and wholly loving each other, if that makes sense.

Minson:  It does. What else are you bringing back?

I knew that community was something close enough to me that I wanted to pull it into my major, but I’ve never felt it like in Israel. What I saw in Israel [pauses]: what it brings up in me is: authentic sharing, and authentic relationships between communities. Understanding that there are differences, and also understanding that the bridges between those differences are important, is the biggest thing that I brought back from all of these experiences. I really think there’s no finite amount of education or understanding in the world and if people advocate for their experience we need to listen.

"There's no finite amount of education or understanding in the world and if people advocate for their experience we need to listen." —Ryan James, University of Cincinnati student leader