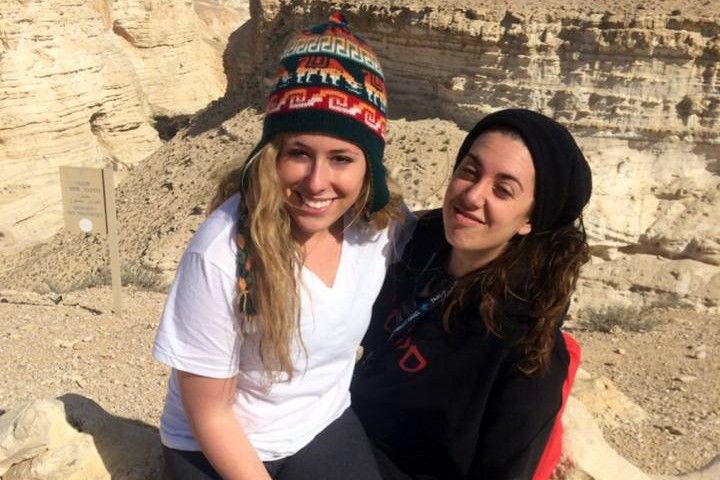 A year and a half ago, University of Cincinnati sophomore Harley was eager for new experiences. She got them—but in a different way than she’d thought. As a typical American teenager from Cleveland, Harley wanted to go to a big university with a big football team—she had her “heart set” on the University of Kentucky.

When her dad was concerned that she wouldn’t like it because there weren’t many Jewish kids, she paid no attention, telling him, “I am not going to college to look for more ways to become more Jewish. My friends don’t have to be Jewish, I don’t have to marry someone Jewish. That doesn’t matter to me.”

Luckily, because of in-state tuition and “because it was almost as far away from home as Kentucky!” Harley went to the University of Cincinnati. Her very first day there, she tagged along with a friend to the Back-to-School BBQ at Cincinnati Hillel.

That first day did not change her life, but Hillel did. She loved the people she met. And she ended up going to Israel just a few months later, in December, on a Taglit-Birthright Israel trip—a free 10-day heritage trip to Israel for Jewish young adults, ages 18-26.

She thought she “might as well” see where her family comes from. Her grandparents are Israelis who grew up in Tel Aviv, and immigrated to the U.S. in their early 20s. Harley says, “I thought I would actually see the places they’ve always talked about with me my entire life.”

“I wasn’t expecting it, but Hillel has become a home away from home for me, now I couldn’t imagine it any other way.”

“So I went and I had absolutely fell in love with it, and I had an unbelievable time, met amazing people who I still this day keep in touch with. I called my grandparents almost every day while I was there. They loved hearing from me. It was sort of like I was there for them. Being able to go and visit my grandpa’s apartment, where he grew up, was unbelievable.”

After her trip Harley was elected secretary of the student board at Hillel. “I was here almost every day—that’s not an exaggeration!” she grins.

That trip rocked her world, so she did everything possible to go back. Given that older students have priority, it was a difficult climb, but she managed it, getting help from many at Hillel, including their Israel Fellow. So last summer, the summer of Operation Protective Edge, this adventurer went to Israel for the second time in six months, as a part of Onward Israel, a free six- to 10-week immersive experience in Israel. She took an eight-week internship in Tel Aviv at a center for disabled children. “I learned so much about myself and so much about Israel, especially being there during the conflict. It made the experience so much better, being there while that was going on,” she says.

Asked what makes Israel special, Harley says, “What I love the most about Israel is that no matter what, every Jewish person from anywhere in the world is welcome. There’s just a sense of family with everyone there. You feel safe, because everyone there is Jewish, and it sounds crazy, but even being there during the conflict; the IDF makes the country feel protected. I love the sense of home away—far away!—from home.”

This fall she is Bearcat for Israel chair at Hillel. She is committed to studying speech pathology—and to Israel, and to Hillel. She admits when pressed, “Oh yeah, my dad was very right!”

Harley’s big adventures have brought her back home to her Jewish roots, emotionally and literally. The Jewish Federation of Cincinnati helps fund Hillels at UC and Miami University, as well as Taglit-Birthright Israel trips and Onward Israel experiences. In short, thanks to two agencies and 10 Federation-funded programs, Harley is engaged in our community and plans to stay engaged. When you think of how much the Federation does, think of Harley.