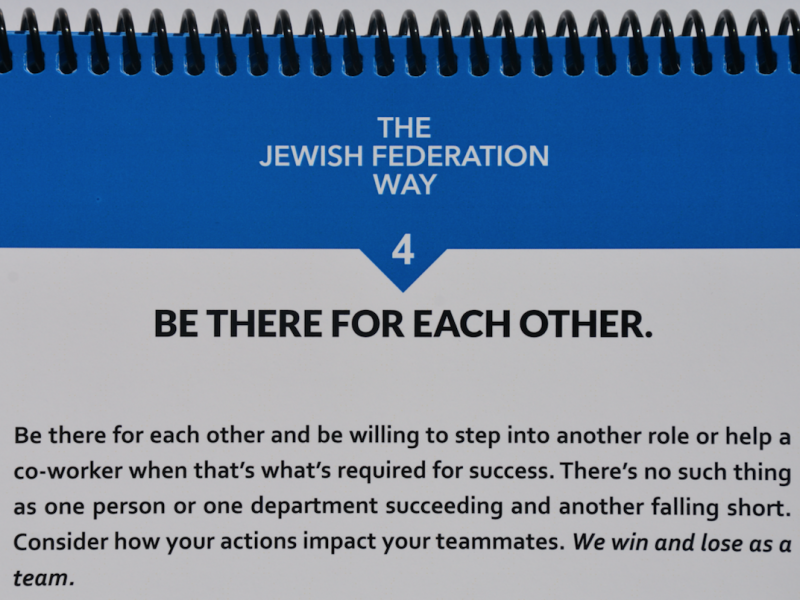 Fundamental #4: Be there for each other

For the better part of two years, our Federation team has been making a deliberate effort to define what drives our work and how we do it. The four core values of Community, Inclusivity, Learning, and Integrity rose to the top. The next step was to identify a list of fundamentals: actionable, daily core behaviors that bring our core values to life and define our culture. Each week, we make a point to focus on practicing a different fundamental, and I kick off that effort by sharing my thoughts on each one at the beginning of each week. Here are my thoughts for our fourth week:

Fundamental #4: BE THERE FOR EACH OTHER. Be there for each other and be willing to step into another role or help a co-worker when that’s what’s required for success.  There’s no such thing as one person or one department succeeding and another falling short.  Consider how your actions impact your teammates.  We win and lose as a team.

When David Harris and our Core Values team surveyed our full staff they had whittled down the possible core values to about 20.

There was one value that always came out on top—community.

I don’t usually disagree with Wikipedia.  Wikipedia defines a community as “a social group that share common values and for the members,  belonging to that community is important to their personal identity.  This definition is incomplete.

The way you can feel when you’re part of a community is when others accept you and value you for more than just what you do, produce or provide. They value you as unique person. They root for you. And they’re willing to help you out in a pinch.

Helping to build communities has been the focus of my work since I was in high school. But I never fully understood a community until our youngest child (then about 7) was diagnosed with a rare and poorly understood syndrome that could have stopped him from walking, running and playing normally for the rest of his life (spoiler: our amazing Children’s Hospital had a surgeon who invented a treatment that worked 100%).

But at that moment, dozens and dozens of members of our community—some who we hardly knew—just appeared. They visited him in the hospital, read to him, played board games with him and even did our grocery shopping.  That’s community.

And that’s why we help each other out in a pinch. It’s just part of who we are.

But at that moment, dozens and dozens of members of our community--some who we hardly knew--just appeared.