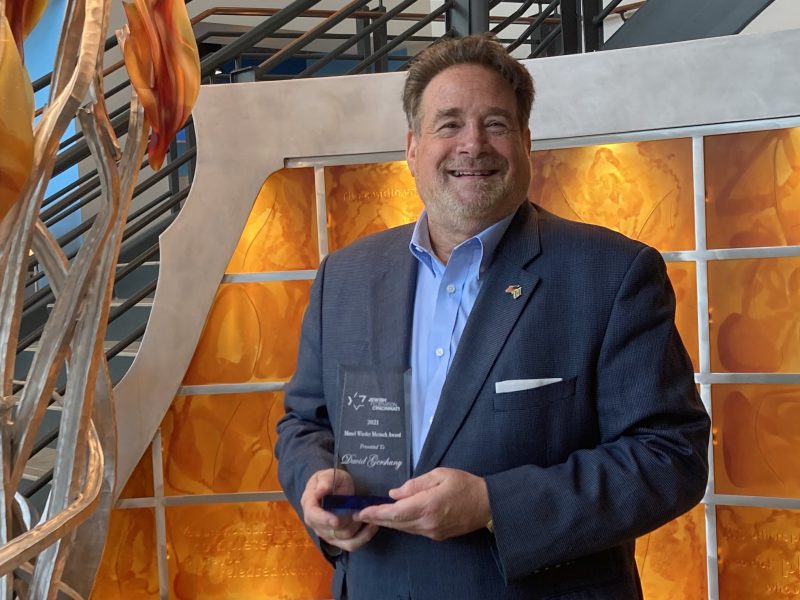 “When I hear the word mensch, I immediately think of the Hebrew word musar, which is ethics as it relates to moral conduct,” explained David Gershuny. “It takes me back to a discussion I had with my father, about what is ethical behavior. ‘Ethical behavior,’ he shared with me, ‘is not just what you do in front of everybody. It’s also what you do when you’re behind closed doors.’ That simple statement has stuck with me, and helped provide guidance throughout my life.”

Gershuny is the recipient of the 2021 Mesel Wieder Mensch Award, which is presented annually by the Jewish Federation of Cincinnati to someone who has volunteered in a leadership role on a Jewish Federation committee, or a Create Your Jewish Legacy team, and has made a legacy commitment to the community. “When I hear the word legacy,” he said, “I think of how an organization is going to continue to not only survive, but thrive into the future. Yes, you need current operating funds, but you have to focus on how to raise money, not only for today, but for tomorrow, and tomorrow’s tomorrow.”

Gershuny was nominated by the leadership at Jewish Education for Every Person (JEEP). “David has volunteered untold hours building JEEP’s sustainability. He is the epitome of a mensch. He rolls up his sleeves with warmth, good humor and an upbeat positive presence. He thinks big and is there every step of the way to manifest it in every detail.”

Under his leadership, JEEP has grown its endowment fund more than 30-fold from January to December, 2020. In addition to his work with JEEP, David has volunteered countless hours with various other organizations in the community that include, but is not limited to, Jewish Federation, Adath Israel, JNF, and Camp Livingston.

“I recall an incident with my grandfather: he was meeting with my Uncle Joe Katz about giving money to a free loan society. I was very fascinated about this, so, I asked him, ‘Why are you giving him so much money?’ And he said, ‘Because that’s what our obligation is. If I don’t, who will?’ He went on to say that that was the same advice his father gave him. Within our family, it was instilled in us to be of service to others; we had an obligation to give back whether it was our time or our financial resources, but we always had to give back.”

Gershuny is a fourth generation Cincinnati resident, and was involved in United Synagogue Youth in high school. He served as chapter president both his junior and senior years, and took a seat on the regional board his senior year. He was involved in non-Jewish boards and organizations, until a personal tragedy connected him to the Jewish Federation of Cincinnati.

“My daughter, Sydney, attended Camp Livingston and met her new best friend, Moriah. Moriah lived in Netanya, Israel. When she came home from camp, Sydney continued asking me when I would take her to Israel. Unfortunately, Sydney’s life was cut tragically short 16 years ago, May of 2005. Like all parents who lose a child, I was devastated. At the time, my sister Carol Ann Schwartz was the cochair of the Partnership 2000 committee, and they were having a trip to Israel. My mother insisted that I go to get away, visit dear friends, and clear my head. While there, we were touring Sharet Jr. High School in Netanya. On these trips everyone wears a name tag. Naturally, I had mine on. A group of three kids pass by me and one of them looked at me and says, ‘You’re Sydney’s Abba!’ It was Moriah. I wound up chatting with her and her friends all afternoon, then was invited to their home for dinner. I have always believed that G*d gives us opportunities every day. It’s upon us whether or not we accept that opportunity.”

At that point, Barb Miller, the now retired Director of Community Building at the Jewish Federation, informed Federation CEO Shep Englander of what happened. “Shep reached out to me to see if I wanted to be on the Camp Livingston committee—how could I say no? This is what I’m supposed to be doing, and that’s how I began my world of Jewish philanthropy.”

“My philosophy is when I am involved in an organization, I’m involved. When you get me, you get me. If you just want someone to sit in a board room and nod, you got the wrong guy. I’m not going to be a yes-man. I’m going to get in there, get my hands dirty, and do what I think is right for the organization.”

For Gershuny, his work in the community is deeper than just an item on his resume. “I want to provide an example of ‘doing’ for my children. I want them to take my legacy and continue to pass it along to future generations. I want them to understand what their obligations are—as Jews we are obligated to serve others.”

The Mesel Wieder Mensch Award was established in 1999 by the friends of Mesel Wieder, who set up an endowment to honor his memory. The award was created to celebrate those in Cincinnati’s Jewish community, who, like Wieder, exemplified the meaning of the word mensch. Weider survived the Holocaust in Ukraine; was extremely involved in Adath Israel Congregation; showed his dedication to education through volunteering for Rockwern Academy’s L’dor V’dor program; and frequently attended Holocaust & Humanity Center programs. He passed away in 2010 at the age of 96.

Gershuny took a moment to reflect on the award and of his relationship with Weider. “I was so fortunate to have actually known Mesel. We would meet up after synagogue and—upon occasion—I would drive him home. On those rides we would chat, sometimes pick up groceries. He was such an incredible, incredible man, and being given this award in his name is overwhelming. I want to thank everyone involved in giving me this honor. It truly means a lot.”

“I want to provide an example for my children of giving both my time and my financial resources. I would like them to take my legacy and continue to pass it along to future generations. I want them to understand what their obligations are—as Jews we are obligated to ensure that we are there to serve others, not only today, but tomorrow.”—David Gershuny, 2021 Mesel Wieder Mensch Award Winner