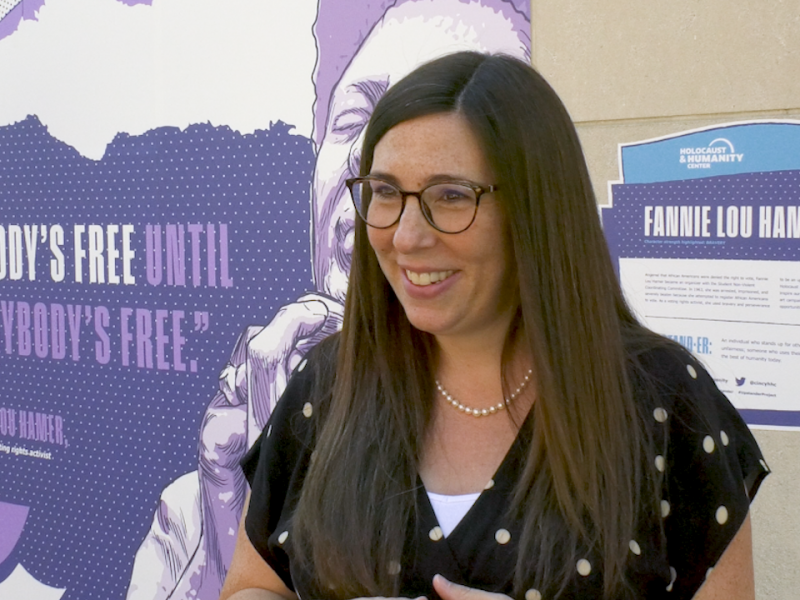 "We invited these students for tours, not to lecture them on what they had done, but really to educate them about what the historical context was, what the extreme manifestation of hate is, and how dangerous it is. And to encourage them to think about actually standing up against it." —Sarah Weiss, CEO, Nancy & David Wolf Holocaust & Humanity Center
April 8, 2022 | 0 Comments
Tweet
Share
Share
0 Shares

How You Help: What to Do When Teens Are Antisemitic in School

Last spring, in Cincinnati schools, three teenagers committed antisemitic acts. While their names will not be shared, they have become, surprisingly, success stories for the Jewish community. Each teen was offered the chance, through their school, for their own tour—with a parent or their whole family—of the Nancy & David Wolf Holocaust & Humanity Center (HHC). Each chose to do so, and came away changed.

The Anti-Defamation League’s most recent Audit of Antisemitic Incidents in the US recorded the third-highest level of antisemitic incidents since 1979, when ADL’s tracking began. Antisemitism in our schools is a real issue. “These are the calls we dread in our work,” said Sarah Weiss, CEO of the HHC. “This isn’t new, but we are seeing the level of venom increase: it can be more threatening, or more violent, or more direct. So that is extra concerning.”

This past year, in Cincinnati, Jewish teens saw a swastika drawn on a playground. They saw a student saying “Heil Hitler!” at school. They saw social media images of classmates wearing Nazi paraphernalia such as swastikas. Students saw that other students had even posted social media images of Jewish classmates, Photoshopped into a concentration camp, wearing a concentration camp uniform.

In each case, the Jewish Community Relations Council (JCRC), the Federation’s nonpartisan, public affairs arm, coordinated with administrators, educated students and staff, and supported the Jewish students. The JCRC is the community’s first responder to antisemitism. “We, as a community, invested in the JCRC as a response mechanism; so we are there to get the phone calls from school districts, parents, people in the community who have witnessed or been a victim of an antisemitic incident,” said Jackie Congedo, Director of the JCRC. “We have the expertise, and we have relationships built across the community.”

In these instances, the Jewish Federation’s partner, the Holocaust & Humanity Center, used a brand new, innovative model to educate all three of the identified perpetrators. JCRC and HHC offered the schools the opportunity for each offending student, accompanied by a parent, to have a private tour of the HHC with a Holocaust educator. “We invited these students,” Weiss said, “not to lecture them, but really to educate them about the historical context, what the extreme manifestation of hate is, and how dangerous it is.”

The teens learned. One mother brought not only her student, but also their siblings, along with some family friends, on the tour. She wanted to use it as an educational opportunity. “She was, you could tell, incredibly devastated by what had happened,” said Weiss. “Her child was very responsive.” The mother said she was grateful for how it had been handled as a learning opportunity.

After the tour, the second perpetrator wrote a heartfelt letter of apology to the Jewish students and staff affected, sharing what they’d learned at the museum, and concluding: “I hope one day all hate will leave this world.”

The third, said Weiss, was nervous, which made sense. “They kept saying, ‘I really don’t know anything about this.’” But they stayed, and learned, for a long time. “They really engaged on the tour and asked a lot of thoughtful questions,” said Weiss. “[The student] was a smart kid.”

The central response mechanism to antisemitic incidents remains the JCRC. JCRC staff coordinates with SAFE Cincinnati, the Federation’s security-focused arm, which has strong relationships with law enforcement. SAFE Cincinnati works tirelessly to assess threats to the entire Jewish community. JCRC also works with HHC and other allies in the broader community and government. “We can be a center point to triage a response,” said Congedo. “Our goal is to bring about the best possible outcome.”

“I often picture a student at a fork in the road,” said Congedo. “And we have to think about what pathway we want to help that student walk. So we hope this experience will help them learn and be an upstander the next time. We’ve heard from them that the HHC tour was transformative.”

Congedo also highlighted the idea of teens as caught up in broader societal issues. “It’s not a secret that we are in the middle of a very divisive time when tension and hate have bubbled to the surface. And kids are reflecting that.”

Concluding the interview on a hopeful note, Congedo said, “If you are a student and you did something like this, and hopefully once you’re told why it was wrong, you’re ashamed, right? And then to be welcomed with open arms and hear: ‘It’s okay, we’re here to help you understand.’ Think about what that is for a young person to be received that way. Hopefully, that leads to great things for them, too.”

"She was, you could tell, incredibly devastated by what had happened," said Weiss.