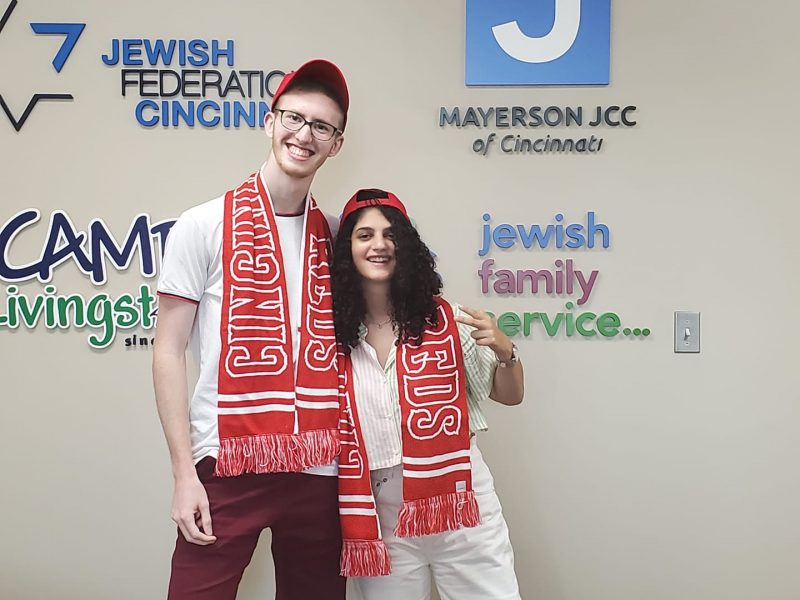 Nitzan Beck (left) and Lior Binyamin are the newest Chaverim M’Israel (Friends from Israel), and bring a passion and excitement to their new assignment.
November 2, 2021 | 0 Comments
Tweet
Share
Share
0 Shares

“We’re so glad that we got here, and are super-excited for the upcoming year. We want to take a big part in this community,” said Lior Binyamin, who, along with Nitzan Beck, will be Cincinnati’s Chaverim M’Israel, or Friends from Israel.

The Chaverim M’Israel program, or Shinshinim Program (translated as Friends from Israel), is a highly sought after year of service opportunity that allows Israeli students to travel and serve in a community abroad, before entering the Israel Defense Force (IDF). Two students are selected every year to be part of the program in Cincinnati, but some cities have as many as a dozen students, while others have only one. At the national level, the program is run by the Jewish Agency for Israel; at the local level, it is run by the Jewish Federation of Cincinnati.

I spoke to Lior Binyamin and Nitzan Beck over Zoom during their quarantine after they arrived in Cincinnati in August. This interview has been edited and condensed for clarity. —Jennifer Clark, Community Building Associate, Jewish Federation of Cincinnati

Jennifer Clark: We’d like to welcome both of you to Cincinnati. First off, can you share a little about yourselves so our readers can get to know you?

Lior Binyamin: My name is Lior, and I just turned 18. I’m from Netanya, which is Cincinnati’s sister city. I’m an only child, so I have a very close connection with my parents. I have a really cute little dog. I was in the Scouts movement, and also led the community center in Netanya. I danced for past 11 years, and won several competitions with my dance troupe. I also did jujitsu and Thai boxing for nine years. In school I studied international relationships and diplomacy. I’ve taken part in a Young Ambassador program where I went to a camp in London filled with Jewish young teens from all over Europe.

Nitzan Beck: My name is Nitzan and I’m from Kiryat Motzkin, which is a small city near Haifa. I have a big sister and a big brother, and a small dog. I’m a professional handball player; I play goalie on the national team. I started playing when I was three years old. My father was a handball goalkeeper, and my big brother also plays handball. In high school I was in a special class for young leaders where they taught leadership skills.

JC: It sounds like you two have very complementary interests and passions. Had you met before being named Chaverim?

LB: No we hadn’t. After you called us to say that we got accepted, I was like, “Can you send me Nitzan’s phone number?” So we started talking. I think the first time we saw each other was when Nitzan came to visit me in Netanya. Afterwards, we just kept meeting at seminars; we’d go to concerts together, things just to get to know each other better. I can say that I have the best partner that I could have received for this year.

JC: What do you hope to bring to Cincinnati during your time as Chaverim?

NB: We both love Israel so much, that I think we can bring that love to help make people more connected to Israeli society and culture. With me, my love for sports will help me connect with people. I hope that when they get to know Nitzan, they will get to know Israel. A lot of people love to do sports and traveling and hiking and stuff like that, so I want to be able to say, “Okay, let’s go running together. Let’s go biking together.” Then as we build that connection individually, the connection culturally gets stronger.

LB: We both are really hard workers. We have a lot of spirit, and we’re really into just getting things done—we want to do a lot of stuff. I think that we’re going to bring a different Israel to Cincinnati, and to the Jewish community. I also think we can give a different perspective; something people can’t get from the news. We know what it’s like to live there, we know the situation, and feel it in our daily lives. We’re able to say, “Okay, you’ve read that article, but listen to our opinion as well.” That way people can see both sides. There’s no right or wrong, there’s just a super-complicated situation. If we can make even one person realize that it’s not black or white, and to see a fuller picture, then we did something right.

JC: What is something you’re hoping to bring back to Israel from your time in Cincinnati?

LB: I’ve read a quote from Omri Casspi, who is an Israeli former NBA player. He said, “I went out of Israel as an Israeli, and I came back as a Jewish person.” So I think that is something that I’m really looking forward to get to know here. In Israel it’s easy to be Jewish, and you don’t have to work so hard for that, and here it’s not the same situation. So I’m looking forward to see where I put myself in that situation.

NB: It will open my mind to different cultures, and different kind of Judaism than I know from Israel. In Israel it’s just Conservative and Reform, it’s not like this in Cincinnati, it’s a combination of them all. I want to explore the different perspectives of Judaism and how I can connect that to my Judaism.

JC: What’s something that’s surprised you the most so far about being in Cincinnati?

LB: What surprised me the most was how much you feel the Jewish community. Like in the JCC, which is open to not just Jewish people. You can meet so many people, and they’re so friendly—everyone comes up and says hi. I didn’t think that a community that isn’t that big in numbers, compared to other communities around the world, can feel like that strongly.

NB: Another big difference I’ve noticed is Sukkot [which was coming up at the time of this interview]. In Israel almost everybody has a sukkah at home. Not everybody has Sukkot here. Their holidays are different, and just the whole Jewish experience is different than what we have at home. For example, we went to a Jewish lesson in Rockwern [Academy], and I told my mom, they spoke about it so beautifully that it made me want to go to the synagogue on Rosh Hashanah. That wouldn’t be something that I would do regularly back home.

JC: Are there any quintessential American things you’d like to experience in your year here?

LB: I wish I could go to high school! My host sister took me to see the high school. I was like, “Oh my gosh, it’s just like in the movies.” You have yellow school busses and football stadiums and cheerleaders It’s so cool, I feel like I’m in an American movie, my mind was blown!

NB: I really want to go to camp! That’s something, in my opinion, that is really American. I always see in the movies about kids around the campfire, and going to the lake, and they do really fun stuff that I never had the chance to do.

JC: You’ll get the chance to visit Camp Livingston next summer! I’m so excited for you to have that experience. Are there any final thoughts either of you would like to share to our readers?

LB: I think I can just say in the name of both of us, that we’re so glad that we got here. Nothing was 100 percent sure with COVID, and we’re both really happy to be here. We’re super-excited for the upcoming year. We want to take a big part in this community. I also want to let everybody know that if anyone needs anything, or just wants to talk with us, we’re here. That’s our purpose, our goal, and we want people to feel comfortable enough to reach out to us at any time.

If you are interested in getting in touch with the Chaverim, you can reach out to Jennifer Clark at jclark@jfedcin.org or 513-305-0602. Jennifer is the Community Building Associate at the Jewish Federation of Cincinnati, and oversees the Chaverim program.

“We both love Israel so much, that I think we can bring that love to help make people more connected to Israeli society and culture.” —Nitzan Beck