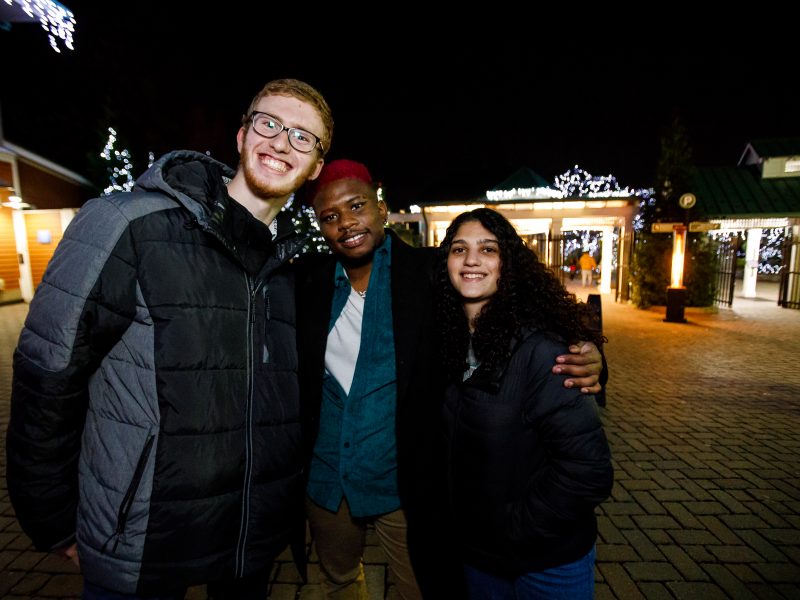 Six Months of Impact: Our Chaverim Weigh In On Their Cincinnati Experience

“Both Lior and Nitzan are very passionate about what they bring here to Cincinnati,” said Jennifer Clark, who manages the Jewish Federation of Cincinnati’s Chaverim M’Israel program. “It hasn’t been the year we expected. We’ve had a lot of pivoting because of the pandemic, but they have come up with such incredible ideas and ways we can show impact. I’m just so proud of them.”

The Chaverim M’Israel program, or Friends from Israel, is a highly sought after, year-long service opportunity that allows young Israelis to travel and serve in a community abroad—before they enter the Israel Defense Force. “It’s hard to be in another country during a pandemic, without one’s family,” said Clark, “and they have continued to find ways to not only engage people, but they have looked at new ways to share their passion for Israel; for their country.”

Lior Binyamin and Nitzan Beck have been in Cincinnati since August, and, looking back over the past six months, they are incredibly proud of the impact they’ve had in the community. “We did a big event for Hanukkah—for Jewish and non-Jewish kids, Orthodox and Reform, Conservative and Israelis,” remembered Binyamin. “We took them to the zoo for the Festival of Lights and had them perform a scavenger hunt. Afterwards we had this really awesome Israeli party with pictures of different streets of Israel. This was a highlight for both of us because it was the first time during the pandemic where we got to see a lot of the kids in the community, and felt like we accomplished something big.”

Beck shared that the moment he felt he was making a connection was shortly after Halloween. “We were in the lunchroom with the kids we were teaching that week and I felt like they were not connecting with us. I didn’t feel like I was impacting them. Then one of the kids asked me if I liked Peanut M&Ms, and I said ‘Yes.’ And then she opened her bag of Halloween candy and gave me a bag of Peanut M&Ms. That was the first time that I understood how much they appreciate us. That’s the moment that I realized how important this role is, and how much I’m affecting people in the community.”

Binyamin said she had a similar experience when she met the parents of the students she was working with. “The parents knew who we were, and told us that their students had been talking about us. It’s really nice to know that the kids are talking with their parents about us, and you feel like we are having an impact.”

Other highlights from their time here—for both Binyamin and Beck—have been the experiences they’ve had with their host families. “I’m an only child,” said Binyamin, “so for me, the experience of having siblings is new, and I love it.”

“My family is also incredible,” added Beck. “For my birthday my host sibling took me skiing. It’s something that I’ve always wanted to do. Another thing they’ve introduced me to is American football. I had never seen it before, but now I am a huge Bengals and Bearcats fan.”

The Chaverim returned to Israel for a short break, but they didn’t view it as a vacation. “We’re going to keep working,” said Binyamin. “We’re going to get as many photos, videos, and tours as we can so we can bring them back and share them with the community.”

Already anticipating their return, Clark said the Chaverim would soon be charting new territory for the program.  “We’re going to start working with some of the older adults of Cincinnati who are homebound, who don’t get a chance to go out as much,” she said. “We’ve never done anything like this before, but it’s an example of the creativity Lior and Nitzan bring to our team. They have lots of ideas and the best is yet to come. I’m super, super enthusiastic and excited for the next six months.”

Beck and Binyamin both said they are looking forward to spending Passover, Yom HaZikaron, and Yom Ha’atzmaut in Cincinnati. “Those are such important holidays,” said Binyamin, “and I’m excited to see how they are celebrated here, and the conversations that we can have surrounding them.”

The pair is also excited to volunteer at summer camp at Camp Livingston. “From what I understand,” Beck noted, “this is the highlight of not only our time as Chaverim, but summer camp is a cornerstone of the American experience.”

“Overall,” said Binyamin, “I think we’re both trying to do our best. I feel like the community is really warm and hugging us, and you feel like you’re wanted here.”

“I think we’re both trying to do our best. I feel like the community is really warm and hugging us, and you feel like you're wanted here.” —Lior Binyamin, Chaver M’Israel/Friend from Israel