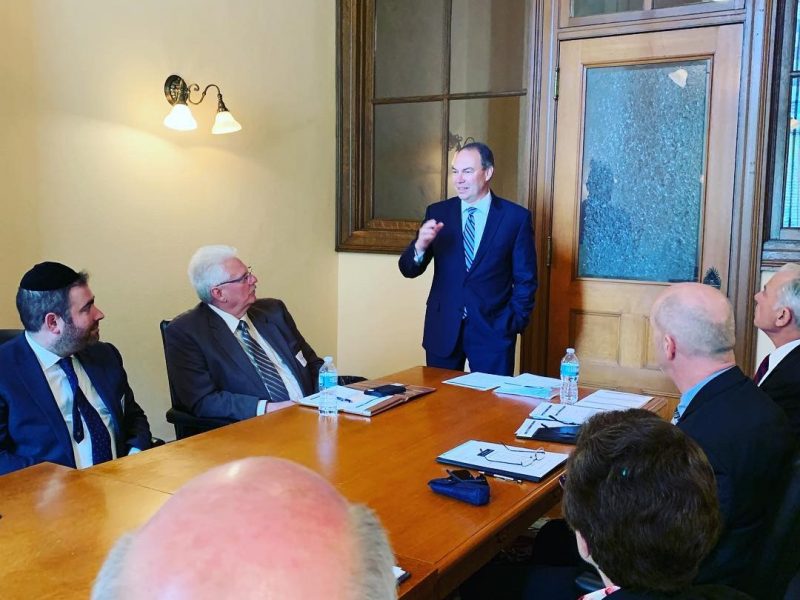 The following is a statement from Ohio Jewish Communities, who advocates on our behalf in Columbus, about new security funding for nonprofits and schools to combat a new wave of terrorism. —Jackie

The Ohio Senate released their amended version of the state’s operating budget – Sub. HB 166 – for the upcoming two fiscal years (FY 20-21).  It includes key funding for nonprofit security needs in the wake of a sharp rise in terror attacks and attempted attacks on houses of worship, faith based institutions, cause-based nonprofits, and individuals identifiable as members of religious, racial, or ethnic minorities.

Jackie Congedo, Director of the Jewish Community Relations Council of the Jewish Federation of Cincinnati added “As we retool to focus on today’s threats it is this kind of proactive legislation that we need to help us leverage our philanthropic dollars to keep our communities safe.  There’s no greater need, as we greatly increase our spending to keep our institutions safe, than in hardening the physical campus and in deploying armed personnel.  And, our local legislators stood up and led here. We are especially grateful to Senator Thomas and Reps Seitz, Kelly, and Miranda. We likewise urge immediate passage of the bill.”

House led on target-hardening funding in their version

As well, the Senate adds a $1.25 million per year appropriation to a matching grant program so that nonprofits such as chartered nonpublic schools and synagogues can hire armed security personnel, including school resource officers and special duty police.

Ohio Jewish Communities Executive Director Howie Beigelman said “A terror plot foiled by law enforcement in Toledo just months ago is bookended by the terror attacks at synagogues in Pittsburgh and Poway.  Not a week – or a day – goes by without a new violent anti-Semitic attack somewhere.  The KKK came to Dayton.  Christians are killed at Easter services in Sri Lanka, African American churches are firebombed in Louisiana, and Muslims are gunned down at Christchurch mosques.  Houses of Worship, schools, and community centers should be safe spaces, but instead have become potential targets.  We commend the leadership for acting now, before it is too late.

As FBI statistics and reporting by the ADL show, incidences of violent attacks on religious minorities in the US are on the rise. News media internationally record a disturbing trend in attacks on Jewish institutions and individuals.

“We express our communities’ deep gratitude to legislative leaders in both chambers who led on this issue,” continued Beigelman.

“Senate President Larry Obhof has understood this need for years, and made this a priority issue.  We are likewise appreciative of the support from other Senate leaders, including Minority Leader Kenny Yuko, President Pro Tem Bob Peterson, Majority Floor Leader Matt Huffman, and Assistant Minority Leader Cecil Thomas.  Finance Chairman Matt Dolan took an early interest in working this issue and we appreciate too the bipartisan support of the committee, led by Ranking Member Vernon Sykes. Senator Kirk Schuring took an untiring role as lead sponsor of the personnel amendment which was also offered and supported by a bipartisan roster of individual senators: Senators Nickie Antonio, Andrew Brenner, Hearcel Craig, Teresa Fedor, Stephanie Kunze, and Michael Rulli.

“In the House we know that nothing could have happened on this issue without the support of Speaker Larry Householder, and we are grateful as well for the support of Minority Leader Emilia Sykes. We commend Speaker Pro Tem Jim Butler for his support and effort on this and also are thankful for the leadership of Majority Leader Bill Seitz.  On the Minority side, we couldn’t have asked for stronger advocates than Reps. Kristin Boggs and Kent Smith.  Our bipartisan trio of lead sponsors in the House were Reps. Dave Greenspan, (former Montgomery County Sheriff) Phil Plummer, who understands this issue from a professional lens, and Casey Weinstein. Chairman Scott Oelslager was generous in giving his time because he cared deeply regarding the underlying need, and as in the Senate, the committee led on this issue with true bipartisanship, for which we thank Ranking Member Jack Cera.  Other members of the House who submitted and supported these amendments were Reps. Antani, Carfagna, Carruthers, Crawley, Ginter, Green, Keller, Kelly, Leland, McClain, Miranda, Patton, Rogers, Boyd, and Romanchuk.”

As well, the Senate version funds another key priority: the Ohio-Israel Agricultural & Cleantech Initiative maintains its current funding level of $250,000 per year over the biennium.  This is a unique, and now oft-imitated but never quite replicated initiative that connects Ohio and Israel in business partnerships, commercial opportunities, technology transfer arrangements, and research and development collaborations across two critical industries.

“I’ve seen firsthand the work of OIACI,” said Beigelman, who sits on the Initiative’s Advisory Board, “And, I know the return on that modest state investment is manifold in the benefits it brings to both states and to the startups, small and medium sized businesses, universities, and research institutions looking to innovate and to solve real-world problems, including some of Ohio’s most pressing environmental challenges.”

“As we retool to focus on today’s threats it is this kind of proactive legislation that we need to help us leverage our philanthropic dollars to keep our communities safe.  There’s no greater need, as we greatly increase our spending to keep our institutions safe, than in hardening the physical campus and in deploying armed personnel.  And, our local legislators stood up and led here.”  —Jackie Congedo