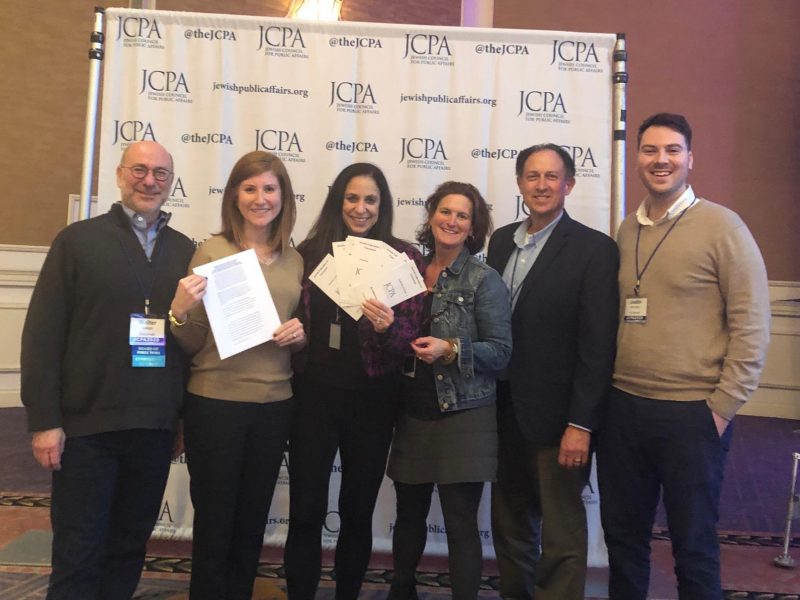 A delegation from the Cincinnati JCRC attended the annual conference of the Jewish Council for Public Affairs in Washington, DC, in February.
February 28, 2020 | 0 Comments
Tweet
Share72
Share
72 Shares

Cincinnati’s voice was amplified on the national stage—and our work spotlighted in major ways—at the annual conference of the Jewish Council for Public Affairs (JCPA) in Washington, DC, this February. Six members of our JCRC attended and played significant roles.

JCRC Past President Walter Spiegel cochaired the entire national conference, working diligently for months to plan a series of plenaries and workshops that would resource the field during this critical time.

JCRC President Ronna Greff Schneider lent her robust expertise on issues of church and state during two standing-room-only panel discussions on the topic.

We were proud to also have been represented by Mark Barsman and Amy Susskind Weiskopf.

I was asked to share the program our JCRC led last April—Driving Out Darkness: Cincinnati Regional Summit on Antisemitism and Hate—with the entire field, with the hope it can be a model for other communities. I also cochaired the convening of all JCRC directors across the country for this year’s JCRC Directors Association meeting, during which professionals spent a full day together learning from each other. I was joined by Justin Kirschner, our Associate Director.

At the conference, the JCPA Delegates Assembly voted to adopt six new policy resolutions. The resolutions cover a variety of issues, including gun violence prevention, antisemitism, and restorative and rehabilitative justice.

These resolutions, which are now officially part of the Jewish community relations public policy platform, are the result of a six-month national policy-setting process that began in August. At the Delegates Assembly meeting, representatives of local Jewish community relations councils and national Jewish agencies convened to grapple with important issues of concern for our field, deliberating late into the night to ensure due diligence on these policy positions.

Cincinnati is proud to be the lead sponsor of one of those policy resolutions: officially adopting the International Holocaust Remembrance Alliance’s Working Definition of Antisemitism as the standard for the community relations field. The resolution garnered widespread and diverse co-sponsorship from more than a dozen other communities and national organizations, including the Anti-Defamation League​, American Jewish Committee​, B’nai B’rith International, Jewish Federations of North America​, and the Orthodox Union​. It passed with an overwhelming margin of support, and will now be available for communities across the country to reference as the standard for the field.

We know that in these times, having a clear, reasonable definition of antisemitism is the first step to effectively combatting it. Passing this resolution was a big step forward in the national fight against hate.

We wrapped up a busy few days with meetings on Capitol Hill with members of our Senate and House delegation: Senator Rob Portman​, Senator Sherrod Brown​, and staff of Rep. Steve Chabot​ and Rep. Brad Wenstrup​. We discussed the important topics of combatting antisemitism and hate, bipartisan support for Israel, criminal justice reform, immigration reform, and gun safety reform, and we talked about opportunities to work together to advance these issues.

We returned to Cincinnati with newfound enthusiasm, information, and tools to double down in the work.

“We know that in these times, having a clear, reasonable definition of antisemitism is the first step to effectively combatting it.”