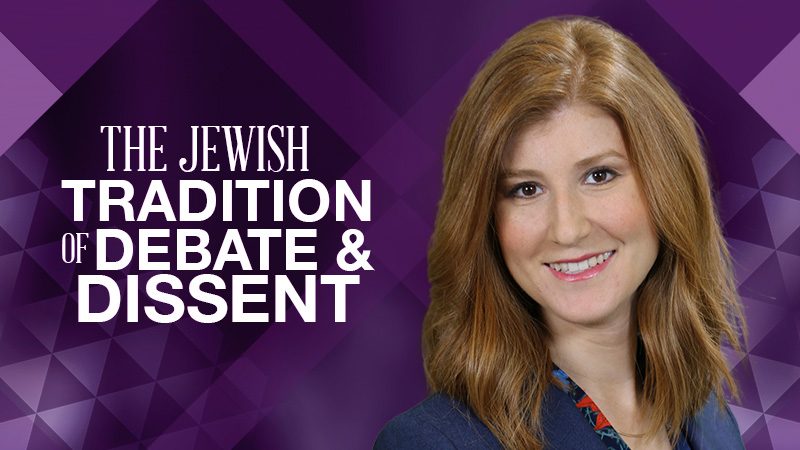 How can we embrace and foster respectful debate and dissent in our communities during this time of extreme polarization? JCRC Director Jackie Congedo suggests nine lessons Cincinnatians can learn from the ancient Jewish tradition of debate.
June 15, 2017 | 0 Comments
Tweet
Share31
Share
31 Shares

Debate in the Jewish Tradition: 9 Ways to Argue, but with Respect

This article was also published on June 14 on WCPO.com.

Jackie Congedo is director of the Jewish Community Relations Council.

How can we embrace and foster respectful debate and dissent in our communities during this time of extreme polarization? People are increasingly seeking out news from sources that support their own viewpoint and engaging in conversations with people of a similar mind. Respectful dialogue with an opponent has become a lost art in the age of social media, headline news, and rapid-fire responses.

As the Jewish Community Relations Council (JCRC), part of the Jewish Federation of Cincinnati, approaches its annual meeting, I think we could all take a cue from the Torah and learn to argue with respect in mind. The JCRC Board and I have invited Rabbi Elka B. Abrahamson, president of The Wexner Foundation, to speak at the June 20 event about how we can encourage civil discourse in our communities. Below are nine lessons Cincinnatians can learn from centuries of ma’amat (debate).

1. Don’t shy away from an argument. In the Jewish tradition, arguments are good and healthy. A productive society is fueled by vigorous debate, so don’t shy away from getting into one. There are more productive ways than others to argue, but argument itself is a time-tested Jewish tradition, and it has been valued and practiced for centuries by Jewish rabbis, scholars, and lay people alike.

2. Examine every angle. Jews believe that you can’t find the truth until you examine every angle and exhaust every argument. We even have a word for it, Machloket, which is a dispute between two differing opinions on a legal interpretation of the Torah.

3. Don’t be afraid to be wrong. Enter a debate armed with facts and your passionate perspective. Argue your point of view, but be open to considering the alternative. Dissent doesn’t require arriving at a conclusion, and being proven wrong doesn’t reflect badly on you.

4. Rehash and reevaluate. The Talmud is a sacred book of arguments, which contains thousands upon thousands of differing commentaries on the Torah and how its commandments should be carried out. Throughout history, rabbis have added to the Talmud, even rehashing the value and interpretation of earlier discussions, and reevaluating them in a modern context.

5. Value diversity of opinion. Jewish people consider diversity of opinion a strength. Our tradition dates back thousands of years and it has changed with the times. Movements such as Reform and Conservative Judaism have arisen from a modern application of sacred texts.

6. Be informed. The art of debate and dissent requires a strong base of knowledge. You must be informed in order to join the fray and be able to stand up in a rigorous debate with those who disagree. That includes being well-versed on the opposing perspective.

7. Talk to each other, not at each other. Listen as much as you speak. In Judaism, debate is all about arriving at the (or a) truth. If we simply talk at each other or talk only in order to delegitimize the other, we won’t arrive at any truth. Even if at the end you don’t agree, someone with an opposing view often has something to teach you, but only if you’re open to the lesson.

8. Don’t belabor your point. Jewish people have a great tradition of rest. Shabbat, or the Sabbath, observed Friday night into Saturday, is a weekly ritual where Jews are asked (even required) to stop, reflect, and just be. You don’t have to reach a consensus at the end of every discussion. Know when to walk away and give the argument a rest.

9. Respect your opponent. While debate is a time-tested Jewish tradition, it is done with respect and civility. The idea is to find common ground where possible; that’s only done with compassion and consideration.

To learn more about the ancient Jewish art of debate and dissent, attend the JCRC Annual Meeting at 7 p.m. on Tuesday, June 20 at the Mayerson JCC. Rabbi B. Elka Abrahamson will speak about the need for civil discourse in our society. In addition, JCRC Director Jackie Congedo and the JCRC Board will share their vision for the future of the organization and its mission to protect Jewish security, recognizing that Jewish security depends on a just society for all. Register at jewishcincinnati.org/JCRC78.

Join the Jewish Community Relations Council for their annual meeting by RSVPing here, and follow JCRC on Facebook here.

“Jewish people consider diversity of opinion a strength. Our tradition dates back thousands of years and it has changed with the times. Movements such as Reform and Conservative Judaism have arisen from a modern application of sacred texts. ” —Jackie Congedo