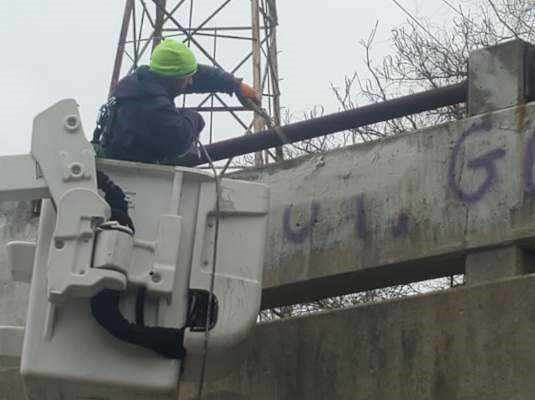 On Wednesday evening, the JCRC was made aware that antisemitic graffiti was spray-painted on the railway trestle on Madison Road between Madisonville and Oakley. An age-old, insidious antisemitic trope was carefully written across the entire span of the bridge over Madison Road.

Our JCRC has been working closely with SAFE Cincinnati, our Jewish community security team, who was quickly in touch with federal and local police, who are investigating the incident. We also worked with the city to ensure the graffiti was cleaned off quickly. We notified local neighborhood councils, the Anti-Defamation League, our elected officials, and our many diverse interfaith/intercommunity partners, many of whom joined us for a solidarity press conference on short notice this afternoon at the site of the graffiti. While we want to be mindful of the potential platform that media attention gives to hatred, we felt this display was in such a heavily-traveled, public place and so large and brazen that we had an obligation to raise awareness and collectively and publicly condemn it.

“Thanks to everyone who for joining us here this afternoon. My name is Jackie Congedo, and I’m the Director of the Jewish Community Relations Council of the Jewish Federation of Cincinnati. A special thanks to Cincinnati Mayor John Cranley, Cincinnati City Councilmembers P.G. Sittenfeld, Greg Landsman, and Jeff Pastor, representing their colleagues on City Council, Hamilton County Commissioner Denise Driehaus on behalf of her fellow commissioners, Cincinnati Police, Cincinnati Department of Public Services, Cincinnati Office of Human Relations, Cincinnati Field Office of the FBI, AJC Cincinnati, the Islamic Center of Greater Cincinnati, the Oakley and Madisonville Community Councils, Crossroads Church, EquaSion and the Festival of Faiths community, the Metropolitan Area Religious Coalition of Cincinnati, Cincinnati’s Sikh Community, Cincinnati’s Baha’i Community, the Cincinnati Regional Coalition Against Hate, the Intercommunity Justice and Peace Center, and the NAACP for their solidarity and support.

Frankly, I wish we didn’t have to be out here today. I wish this brazen act of antisemitic and hateful vandalism had not happened. But the fact is, it did. The fact is, someone—right here in our city—likely under the cover of darkness, took a lot of time to deliberately write out in large letters and on a bridge across one of our city’s main roadways one of the oldest, most insidious antisemitic tropes that exist. The kind of trope that has been used to persecute Jewish people for centuries. The kind of trope that is not just a threat to Jews—but, like any expression of antisemitism—or any other form of hatred—is a threat to the diverse fabric of our Cincinnati community, to all people who believe in and enjoy religious freedom in this country, and to our pluralistic democracy that ensures minority rights.

Furthermore, we know because of a recent Anti-Defamation League poll, that about 30 percent of Americans still harbor this insidious antisemitic belief.

But of all the things we know, perhaps this is the most important thing. We are out here today because we know from our own history that the best defense against hate is when a community comes together to show that we are a city of upstanders and that we—a city of diversity and strength—will not stand for this in our neighborhood, in our city, in our state, in our country. We are tremendously grateful for the support we’ve received from city leaders, police, the FBI, and leaders of other diverse faith and ethnic communities, to quickly work to clean this hateful messaging from our city’s infrastructure, and for being with us here today and in solidarity otherwise. The response from our entire community has been a strong and solid one, that hate has no home here and that these sorts of bigoted, hateful acts, whether perpetrated against the Jewish community, the Muslim community, the Black community, the LGBTQ community, the immigrant community, the Sikh community, or any other faith, ethnic or minority group are a threat to all of us. Words matter. Hateful words lead to hateful actions. In the last few years, nationally, we’ve seen a 100 percent increase in antisemitic incidents.  And so it is important that we also remember that healing words of solidarity and tolerance lead to strength and inclusion. Which is why we must speak out together today.

The hateful message that one person scrawled across this bridge behind me does not represent who we are. The swiftness with which our law enforcement and city leadership acted to get it removed, and the diverse and broad coalition of city leaders who have come together under short notice to condemn it—this is who we are in Cincinnati.”

In addition to many of the many informal words of support, and those that were offered at the press conference from a diverse range of Cincinnati leaders, we wanted to share the following formal statements we’ve received from civic leaders. Our Jewish community is tremendously grateful to all who have reached out in solidarity.

COLLEEN REYNOLDS | OAKLEY COMMUNITY COUNCIL: Good afternoon. On behalf of the Oakley Community Council Board of Trustees and the entire Oakley community, I am simply here to say this hateful act is not at all who we are—and we denounce this entirely. We are thankful to our friends in Madisonville, the Jewish Community Relations Council, the Jewish Federation, our Cincinnati City Councilmembers, Mayor John Cranley, the Cincinnati Police Department (specifically District 2), and the City Administration for standing together against hate and taking swift action to remove the graffiti. We are stronger together and will never condone this behavior here in the 45209. Thank you.

EQUASION: EquaSion, a civic organization informed by interfaith dialogue and which embraces 30 faith communities and 13 world religions, condemns in the strongest possible way this despicable act of religious bigotry perpetrated against our Jewish neighbors; and we stand in solidarity with them at this time. Our community is better than this.  We are a community of compassion and we value and safeguard all faith communities for their cultural, civic and spiritual contributions to our quality of life.  Our Jewish community warrants our full support as they sadly experience, yet again, a gross act of antisemitism.  Our thoughts and prayers are with them.

CINCINNATI REGIONAL COALITION AGAINST HATE:  We, the Cincinnati Regional Coalition Against Hate, are extremely disturbed by this outright display of hatred and vandalism. We must collectively stand up against and denounce expressions of hate and bias within our communities. We stand in solidarity with the Jewish community as they work to resolve this. #noplaceforhate

CINCINNATI MAYOR JOHN CRANLEY: This despicable graffiti is unfortunately part of a disturbing trend worldwide, but we will not tolerate these acts in our community. Cincinnati stands by our Jewish neighbors and will continue to fight against hate of all kinds.

CINCINNATI CITY COUNCILMEMBER P.G. SITTENFELD: As a community, we stand together against hate; we do not silently condone it. Despicable antisemitic graffiti in Oakley/Madisonville, spanning the entire length of the bridge, reading: ‘The Jews killed Christ. They are the enemies of the whole human race. Paul.’ I immediately reached out to the City Manager to dispatch a crew to remove the hate speech, which he has done and should be happening now. I feel torn about drawing attention to such hate/cowardice, but I also believe we have to forcefully declare that this is not who we are as a city.

CINCINNATI CITY COUNCILMEMBER JEFF PASTOR: First let me say that I denounce, in the strongest way possible, this act of hatred. This does not represent the diverse, open, and welcoming Cincinnati that many have fought so hard to create. Let me be clear, I’m a PROUD Jew. No evil act of hatred will force me and others in our city to shirk in fear and be ashamed of who we are. If you’re Muslim, Christian, Atheist, or PolyTheist you are welcomed. LGBTQ, Republican, Democrat, anarchist, independent. You’re welcome here. To the individual(s) responsible for this evil act, the Torah and Rabbis have taught us this concept, Tikkun Olam, Repairing the World. We will work to repair this world so that folks like you do not feel the urge to hate your fellow human. Good Shabbos to all.

A SELECTION OF NEWS CLIPPINGS ABOUT THE INCIDENT AND PRESS CONFERENCE:

"The response from our entire community has been a strong and solid one, that hate has no home here." —Jackie Congedo