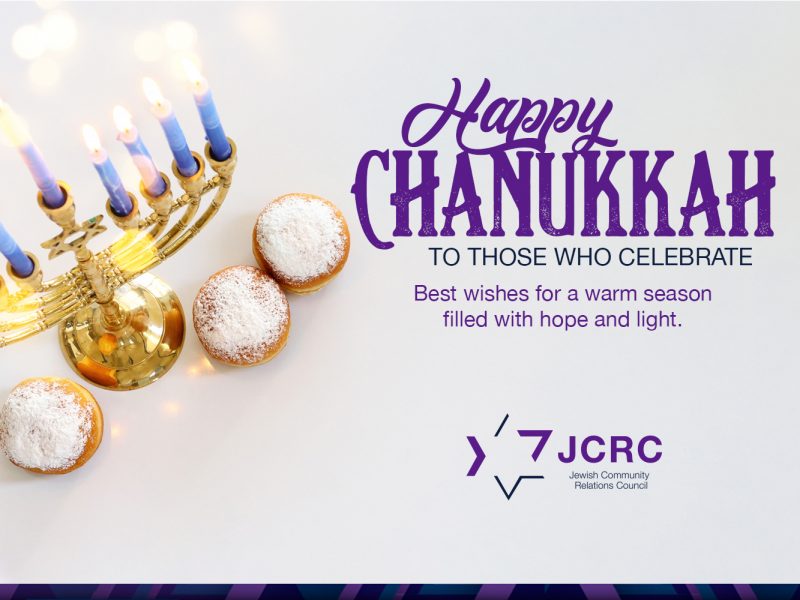 JCRC’s Rabbinic Fellow from Hebrew Union College-Jewish Institute of Religion Ross Z. Levy offers a reflection of Chanukah and the JCRC’s role of casting light into some of society’s darkest corners this coming year. –Jackie

Over the past week, flickering lights brightened windowsills and parking lots alike, as Jewish communities around Cincinnati and across the country celebrated Chanukah together. Long considered a minor holiday on the Jewish calendar, our festival of lights gained a rekindled significance as the Jewish community grew in the United States in the late 19th and early 20th centuries. Its temporal proximity to Christmas likely played a significant role in this resurgence, but more important was the celebration of religious freedom in this newfound American “Promised Land,” where Jews could live and work and pray without fear of the persecution they often suffered in their lands of origin. Their commitment to this new land, its institutions and civic responsibilities, continues to guide us today.

The new light increasing over the course of these eight nights correlates with renewed waves of civic engagement on the part of all Americans. This past election season saw record turnout of voters and engagement in the process even amidst the dark shadows of a still-raging pandemic. It also enlightened many of us to the significance of local elections that do more to shape our communities’ priorities than the widely discussed national races. Even during continuing public health challenges, we should celebrate this increase in interest to be a part of civic life and help push for a more safe and just community. It acknowledges a national commitment to an even healthier and more robust democracy, one that continually strives to be a “light unto the nations” (Isaiah 49:6).

At the JCRC, we hope to build on this energy and continue to cast light into society’s darkest corners. This is the goal of our upcoming fellowship program Leaders in Light: An Alliance to Combat Extremism and Strengthen Inclusive Democracy. Through an engaging institute and follow-up community action projects, Leaders in Light seeks to build a diverse alliance of community leaders who recognize the interconnectedness between all forms of extremism (antisemitism, racism, xenophobia, etc.) on the right and left sides of the political spectrum, and who have the momentum to combat such hateful ideologies that erode our democratic institutions. This cohort of 25 local influencers will be positioned to catalyze the message that despite where we are politically or ideologically, we all have a vested self-interest to embrace nuance, strengthen the center, and counter extremism.

With more light comes more knowledge, and our JCRC is hopeful and excited about the impact Leaders in Light will have on our Cincinnati community and beyond. The institute will launch in fall 2021, and we are developing a program series that will lead up to its launch. Leaders in Light will work to combat this rising tide of hate, acknowledging that building diverse coalitions and strengthening our commitment to democracy is always the most effective strategy.

On Chanukah, we celebrate the freedoms granted by this country alongside the freedom of religion fought all those centuries ago by our Maccabean predecessors. However, as Jews we also recognize that it is not freedom for freedom’s sake that we celebrate, but instead the freedom to dedicate (l’chanech or chanukah) ourselves anew to serving the God of life and light. We show our dedication in our civic engagement, our commitment to building up the greater community, and our resolve in the dark face of hatred.

“Even during continuing public health challenges, we should celebrate this increase in interest to be a part of civic life and help push for a more safe and just community.” –Ross Z. Levy