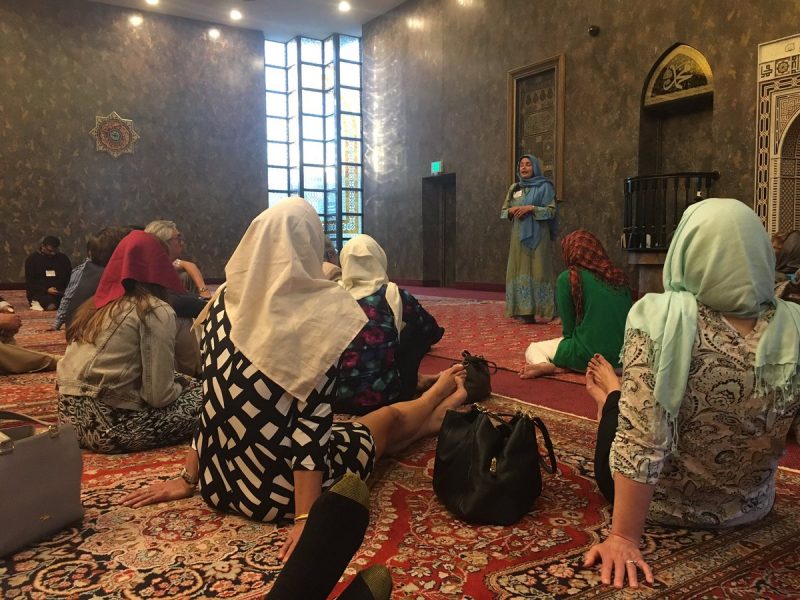 Rabbi Wise of Adath Israel gave the blessing before an interfaith Iftar at the Islamic Center of Greater Cincinnati. He and his wife, along with JCRC Director Jackie Congedo and other JCRC board members, attended during Ramadan in June.
July 28, 2017 | 0 Comments
Tweet
Share
Share
0 Shares

What good are values if you’re not living them?

That’s why, at the JCRC, we are our values. Take 90 seconds now to watch how our values are at the core of the work we do.

If you joined us at our annual meeting on June 20, you saw how these values have guided us in our 78-year-old mission to protect Jewish security, recognizing that Jewish security depends on a just society for all. You heard new JCRC President Walter Spiegel’s vision for the future of the organization, and you heard about the JCRC’s position as trusted, credible, values-driven Jewish voice. Throughout our eight decades of history, times have changed dramatically, but our values have not. This past quarter’s work was no exception.

We stood up for Religious Liberty by condemning antisemitic graffiti at a local business, offering our support, and working with law enforcement to ensure a thorough investigation.

With Mutual Understanding and Respect, we shared in celebration with our friends at the Islamic Center of Greater Cincinnati at this year’s Interfaith Ramadan Iftar dinner. We toured the center, learned about Iftar (dinner during Ramdan), the 5 Pillars of Islam, and listened to personal stories about the Muslim experience in Cincinnati and around the country. Following the tour, we heard from congregational leaders and enjoyed a nice evening with people of all faiths.

We showcased and publicized a beautiful example of how Education and Knowledge can bring different communities together, after Rockwern Academy and Hays Porter Elementary shared much more than just books in their “All School Read” program.

Compassion for the Vulnerable and Bereft led us to support our Jewish social service agencies as the healthcare debate continues. We shared advocacy resources and provided roundtable access to our representatives in congress, so that our agencies could effectively share their stories and those of their clients.

We also toured the Hamilton County Juvenile Youth Detention to experience their operations first hand and to better understand the connection between youth detention and post-confinement life. The detention center is very different from a jail for adults. The juveniles confined there have opportunities to be in a classroom, to express their artistic sides, to eat three meals a day, and to have visits from their parents. They stay in individuals rooms, with a communal space connecting each pod.

We took a stand against threats to Israel, both internal and external, and we showcased the Jewish State’s diversity. We joined with JFNA in strong condemnation of the terror attack at the Temple Mount that claimed the lives of two Israeli police officers, and we continue to monitor ongoing tensions and attacks. We worked with our local Hillels and our national partners to help the Modern Language Association defeat BDS, and we joined with our Federation in support of Jewish unity and pluralism in the Jewish state.

We wrapped up our Israelity Speaker Series with Yad B’Yad (Hand in Hand), an organization that is building a network of schools where Jewish and Arab children learn together; Efrat Rosenberg, who spoke about the chemistry of religious and secular cooperation in Israel; and Hana Bendcowsky, who discussed Jewish-Christian relations in Israel. All of our speakers had the opportunity to make appearances in the Jewish and larger Cincinnati community, in addition to their scheduled Israelity talk in the Jewish community. One of our speakers was even featured on WVXU’s Cincinnati Edition and spoke in front of a large audience at the Immaculate Heart of Mary Parish. These programs were an inspiring example of hope in dire circumstances, highlighting how Jews, Arabs, and Christians can thrive in a diverse environment and learn how to coexist peacefully.

In honor of the 50 year anniversary of the Six Day War, we shared educational videos and resources on the history of the war through our social media channels and the Israel Update. The Six Day War Project series showcased the history of the war, broken down by day, leading up to and following the conflict. The project was developed by the Israel Action Network, part of the Jewish Federations of North America. Additionally, we shared the Christian Broadcast Network production of In Our Hands, a documentary about the Six Day War, with multiple showings across Cincinnati and the United States.

We showed that Just and Peaceful Resolution of Disputes is possible – even during these times of intense polarization. I wrote an op-ed, which appeared on WCPO.com, about the time-tested Jewish tradition of respectful debate and dissent.  And a diverse group of 175 people attended our 78th Annual Meeting, where Rabbi Elka Abrahamson shared lessons to create civil, productive discourse in our society.

If you believe in these values, too, we encourage you to show us you’re with us by sharing our video on social media, exploring our new website, and watching your Facebook feed for a series of #throwbackthursday videos that will showcase how we’ve been living our values – from our founding through today – decade by decade.

Join us as we charge on. Together, #weareJCRC.

The Jewish Community Relations Council is just one of over fifty programs and agencies funded in part by the Jewish Federation of Cincinnati.