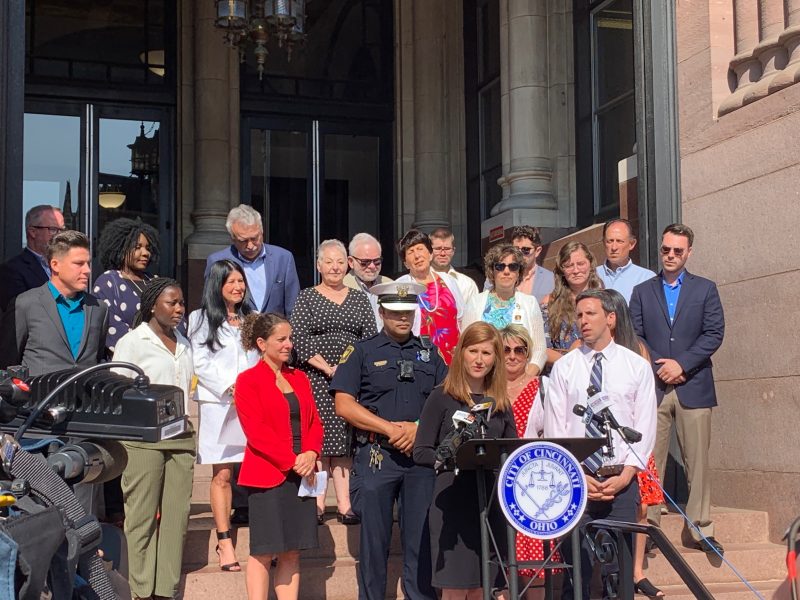 In response to the growing needs of immigrants and refugees in the Greater Cincinnati area, the JCRC is supporting a new rapid response initiative, led by the Immigrant and Refugee Law Center, which would mobilize quickly to support local families affected by the immigration crisis.
August 6, 2019 | 0 Comments
Tweet
Share27
Share
27 Shares

Your gift to the Federation powers the Jewish Community Relations Council, which advocates for Jewish community priorities.

In response to the growing needs of immigrants and refugees in the Greater Cincinnati area, the Jewish Community Relations Council is supporting a new rapid response initiative, led by the Immigrant and Refugee Law Center (IRLC) and its executive director Julie LeMaster, which would mobilize quickly to support local families affected by the immigration crisis.

This is a much-needed coalition of moderate, credible voices and institutions doing this work—one of the reasons why it has been met with unanimous enthusiasm from our diverse board. This response mechanism will go beyond politics to leverage the expertise of diverse service partners and meet the human needs of this situation.

Cincinnati City Council member and JCRC board member P.G. Sittenfeld introduced a motion, which was signed onto by a supermajority of Council, to empower and task IRLC to lead development of a rapid response network for Cincinnati. It includes:

IRLC will leverage a credible, established support network that is already working across the spectrum of services, including the City of Cincinnati, Cincinnati Police Department, Cincinnati Public Schools and Community Learning Centers, Cincinnati Compass, Catholic Charities, LULAC, the JCRC, and others.

Caring for the Stranger

I was asked to speak at the press conference announcing this new initiative. Below are my comments about why we as a Jewish community are eager to play a role in this new rapid response network.

Our JCRC Board has prioritized advocating for fair immigration policy and just and humane treatment of those coming to this country seeking better lives. Because as Jews, the immigrant struggle and journey is part of our DNA as a people. Our Torah instructs us 36 times—literally over and over—to care for the stranger.

This is an important day for our city—not just because we are standing here to talk about the need to keep families together, to talk about supporting children who may find themselves parentless downstream of a deportation, or to talk about ensuring due process for our neighbors.

Today is an important day for our city—because we are doing more than talking. We are coming together across organizational differences and political persuasions. Activists and law enforcement. City policy makers and service providers… to actually do the work of welcoming the stranger.

We, as Jews, identify with today’s immigrants, who come seeking safer, more prosperous lives for their families. As Cincinnati Jews, we recognize our status as first and second generation immigrants and the struggles of those in our families who fled Russian pogroms and the brutality of Nazism. And while we acknowledge the need to maintain secure borders, we feel a historical and religious obligation to advocate for fairer immigration policy and to more compassionately welcome and care for today’s immigrant families.

That’s what this new rapid response model is all about—meeting the human needs of Cincinnati families caught up in today’s immigration debate.

Today is a new, important day in the City of Cincinnati, as we commit to the act of welcoming the stranger with new energy and a new rapid response strategy. Our Cincinnati Jewish community is grateful to play a role.

The launch of this initiative was featured prominently in Cincinnati local news.

Mission to the Border

In addition to this new effort to support local immigrant families, the Jewish Council for Public Affairs (JCPA) is leading a mission to Arizona in September. The JCPA is the national hub of the community relations network made up of 125 community relations councils and 17 national Jewish agencies, including our Cincinnati JCRC.

Representatives from communities across the country will visit with US Border Patrol or ICE, the Mexican and Guatemalan Consulates, NGOs on both sides of the border, immigrant families and shelters, and Jewish supporters of the immigration and border work.

Julie LeMaster is traveling with the delegation representing Cincinnati. Throughout the mission, we will share pictures and updates.

“As Jews, the immigrant struggle and journey is part of our DNA as a people. Our Torah instructs us 36 times—literally over and over—to care for the stranger.” –Jackie Congedo