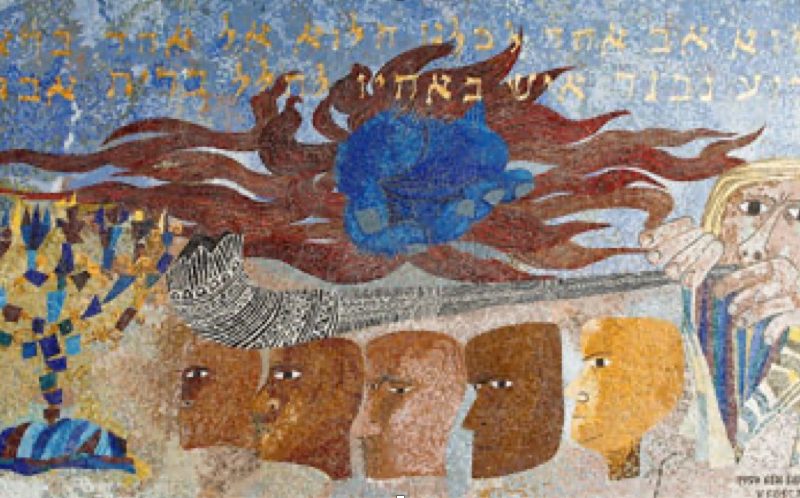 This mosaic, entitled “The Call of the Shofar,” was unveiled by artist Ben Shahn (1898-1969) for in The Temple Congregation Ohabai Sholom in Nashville, TN. In light of Passover, it calls to the Jewish community to walk the path towards freedom as a mixed multitude.
March 26, 2021 | 0 Comments
Tweet
Share
Share
0 Shares

Passover: Finding Freedom for Our ‘Mixed Multitude’ by Ross Levy

Ross Z. Levy, JCRC Hebrew Union College Rabbinic Fellow, here reflects on the story of Passover, and what it means to unite diverse communities in the struggle for ultimate freedom: the freedom from hatred and bigotry.


This past weekend, the Jewish Community Relations Council (JCRC) joined its community partners at the “Stop Asian Hate” demonstration in support of, and in solidarity with, Asian and Pacific Islander communities that have experienced a sharp increase in hate crimes and discrimination, leading up to the tragic shooting in Atlanta just over a week ago. As we stood side by side with a diverse collection of conscientious Cincinnatians, I could not help but think of the upcoming Passover holiday, with its themes of redemption and freedom from oppression.

A verse from the book of Exodus specifically came to my mind. It reads, “The Israelites journeyed from Ramses to Sukkot, about six hundred thousand men on foot, aside from children. Moreover, a mixed multitude went up with them, and very much livestock, both flocks and herds” (Exod. 12:37-38). This brief but important verse teaches us that it was not only the direct descendants of the ancestors described in Genesis who sought freedom and a new life outside of Egypt, but also an “erev rav” or a “mixed multitude” of people from all different backgrounds who journeyed along with them, eventually joining the nation of Israel at the moment of revelation at Mount Sinai.

There are two fundamental ways in which this verse—grounded in the Passover story—connects to the issues that inspired the demonstration at the National Underground Railroad Freedom Center. The first lesson is to develop a heightened awareness for the different faces and voices that comprise the Jewish community. Many within and outside of the Jewish community carry a prototypical image of Jews as light-skinned Europeans. But in reality, we’ve always been a mixed multitude of different looks and genetic phenotypes. We should strive to be more conscientious of the many Jews of color who may experience intersectional forms of hate and discrimination.

The second lesson should be a guiding principle for our outreach work with the greater community: The mixed multitude who achieved their historic freedom showed us that our own freedom—a freedom from hateful ideologies, anti-Semites, and bigots—is inherently linked to the freedom of others who suffer in similar ways.

May this Passover allow us all to reflect on our collective struggle for freedom and safety, both the struggle that is uniquely Jewish, and the one that we all face as a mixed multitude of Americans.

May this Passover allow us all to reflect on our collective struggle for freedom and safety, both the struggle that is uniquely Jewish, and the one that we all face as a mixed multitude of Americans.