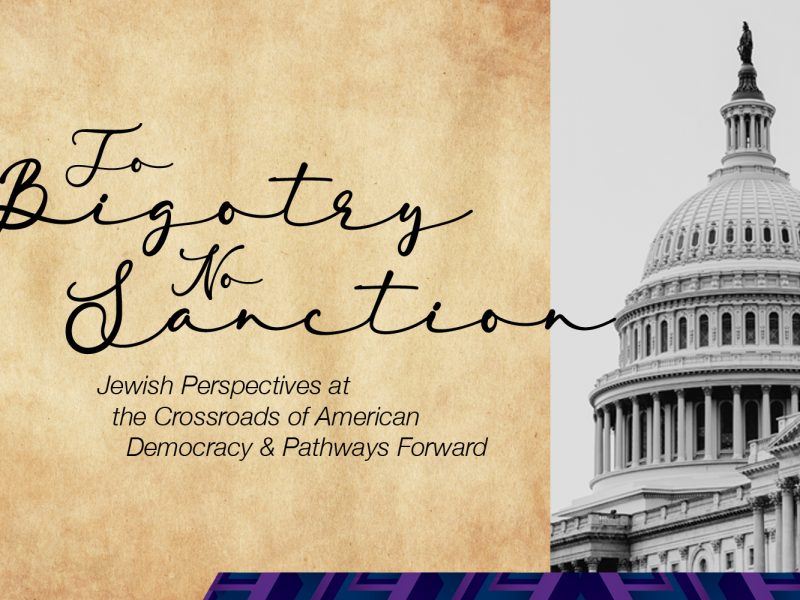 The rise of extremism and antisemitism has created an environment where our democracy faces unprecedented threats and challenges. That’s why the Jewish Community Relations Council is examining the current crisis in America through its new speaker series To Bigotry No Sanction: Jewish Perspectives at the Crossroads of American Democracy and Pathways Forward.

“Our safety and security as a Jewish community is inextricably tied not only to the security of our neighbors, but also to the strength of our democratic traditions and institutions,” said Ronna Greff Schneider, president of the Jewish Community Relations Council. “We know from our own history that democracy is fragile, and the stakes are high if it falters.”

Over the centuries, because of our nation’s sacred promises of religious freedom and opportunity, millions of people have fled persecution in other countries to be part of the American experiment. Soon after his election, President George Washington affirmed his commitment to religious freedom in a series of letters and speeches to religious minorities.

The best known is his address to the Hebrew Congregation in Newport, Rhode Island, where he said, “For happily the Government of the United States, which gives to bigotry no sanction, to persecution no assistance requires only that they who live under its protection should demean themselves as good citizens.”

“Washington’s words outline an important relationship between civic engagement and a safe and free America. The promises of our founding fathers are only as good as our informed participation and engagement in the institutions of our democratic system of government,” said JCRC director Jackie Congedo. “The focus of each speaker will be on what we as citizens can do to strengthen our democracy.”

The six-part virtual series will be open to the public. The first will take place on Friday, March 12 at noon and will feature author and journalist John Judis, whose brand new book, The Politics of Our Time: Populism, Nationalism, Socialism, has been referred to as “essential reading” by the Washington Post. Judis will be in conversation with Dr. Gary P. Zola, executive director of The Jacob Rader Marcus Center of the American Jewish Archives.

“John Judis is a distinguished political analyst,” Zola said, “and those who attend this webinar will learn a great deal about the history of populism and nationalism in America and how these two political ideologies have fostered both white supremacy and violent extremism.” This first event will be co-sponsored by the American Jewish Archives.

The second event will be held on Friday, April 23 at noon and feature Ronna Greff Schneider, who in addition to serving as JCRC president, is a Constitutional Law Professor at the University of Cincinnati. She will examine the debate over First Amendment protection of hate speech, explore the Court’s approach to the separation of religion and the state as well as the potential tension between religious liberties and other civil rights, and address the role of the Supreme Court and the challenges it faces in these divisive and difficult times.

Alongside each of the live speakers, JCRC is launching a companion series of on demand video text studies that will explore more deeply Jewish wisdom and tradition in relationship to each speaker’s theme.

To Bigotry No Sanction is part of a yearlong focus the Jewish Community Relations Council is placing on the role we all have to play in protecting and strengthening our democracy, which is critical to our security as Jews and as Americans.

Alongside this speaker series, the JCRC is launching the Leaders in Light Institute, a first-of-its kind leadership program to combat antisemitism, extremism and hate, and inspire community change.

“Today’s hyper-polarized socio-political environment and the tendency for extreme attitudes to migrate quickly and dangerously from the fringes towards the center of our society demands that we as citizens and leaders double down in our efforts to counter these dangerous trends,” Congedo said. “Both the Leaders in Light Institute and this year’s JCRC programming series are designed to educate and equip our community with the knowledge and skills needed to be more effective in countering extremism and strengthening the fabric of our fragile democracy.”

“Our safety and security as a Jewish community is inextricably tied not only to the security of our neighbors, but also to the strength of our democratic traditions and institutions.” –Ronna Greff Schneider