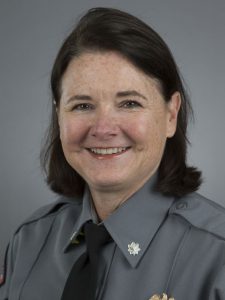 Soon after being promoted as the new University of Cincinnati Police Chief, Maris Herold discussed with the Metropolitan Area Religious Coalition of Cincinnati (MARCC) the challenges the UC Police Department continues to face in the wake of the 2015 shooting death of unarmed, black motorist Sam DuBose by former UCPD Officer Ray Tensing. She talked about the innovative reforms that are currently underway in the department, and she shared her enthusiasm about the ongoing transformation of her department and how they are better prepared to ensure campus and community safety. In addition, on a personal level, she shared with us her unique professional history and how that influences her leadership style today.

Chief Herold is the first woman to serve in this position in the history of the university. Herold was hired as the assistant police chief in 2016 as part of a nationwide search for new leadership in the department; both the former chief and assistant chief resigned in the wake of the DuBose shooting. Herold spent 20 years with the Cincinnati Police Department before joining UCPD. Before becoming a police officer, she worked as a pilot and then as a social worker, investigating child neglect and sexual abuse. Upon experiencing culture shock and uncertainty after entering the police force, she followed her mother’s wise advice and persevered.

“I didn’t want you to go into law enforcement,” her mother said. “Now that you’re in it, policing needs people like you to be in it and stay in it. You must do me a favor—never lose empathy for the people you serve in the community. If you lose that, you need to leave policing.”

Herold has kept that commitment through her career and continues to keep her eyes on ethical and compassionate policing, using the skills she learned as a social worker. When Herold was promoted, she was determined to engage the young men and women of UCPD in innovative training, ethical thinking, and that same compassionate approach.

“I took the role at the University of Cincinnati, believing that they were trying to do that at the time,” Herold said. “This was right after the shooting of Sam DuBose. I wanted this position because of the young men and women that are part of this division—some of the finest people I’ve met. They want to learn and do good things for the community. They want to engage.”

The department is currently under a voluntary monitoring firm, Exiger, which put out a robust 276 recommendations in their report that UCPD must accomplish to meet the police reforms. They have taken an aggressive approach to put the recommendations into effect.

One of the department’s most pressing needs when she started, according to Herold, was resources for training.

“This police department had, in the past, suffered much financial neglect in training and officer development,” she said. “Policing is a high-risk, low occurrence field. If resources are not put into the training of officers, there will be another incident like we had. This is happening all over the country—officers are not trained; they are shooting unarmed citizens.”

Herold said to the university’s credit, she has been given a robust budget that has allowed her to introduce an aggressive training schedule. Understanding the circumstances under which many police shootings happen is critical to preventing them, she said.

“When officers get that radio call to respond, no matter the issue, they rush into the situation without thinking about the situation or calling on other resources or other officers. They have over and over been trained to respond with muscle memory—rapidly and without much thought. This leaves them in a dynamic situation they are not prepared to deal with.”

SWAT teams, on the other hand, are trained to consider time, distance, and barriers as their friend, she said. They contain the situation and remove themselves. Then, they involve those who are better qualified to deal with a situation—doctors, psychologists, crisis negotiating teams, even family members.

The UCPD is bringing the nationally renowned Police Executive Resources Forum to Cincinnati to support officer training; is re-investing in body-cameras, dash cams, and Tasers; and have created a citizen complaint process—accomplishing many of the issued reforms.

Chief Herold left MARCC’s faith leaders with the following. “It was important for me to talk with you today. You are the community. I want you to spread this word around—UC’s Police Chief is committed to doing what is needed; we know that it is vital to have the best trained officers in the country; these officers are people, too; and they are trying and want to do right. We know we’ve done wrong.”

“You are the community. I want you to spread this word around—UC’s Police chief is committed to doing what is needed; we know that it is vital to have the best trained officers in the country; these officers are people too; and they are trying and want to do right. We know we’ve done wrong.” –UC Police Chief Maris Herold