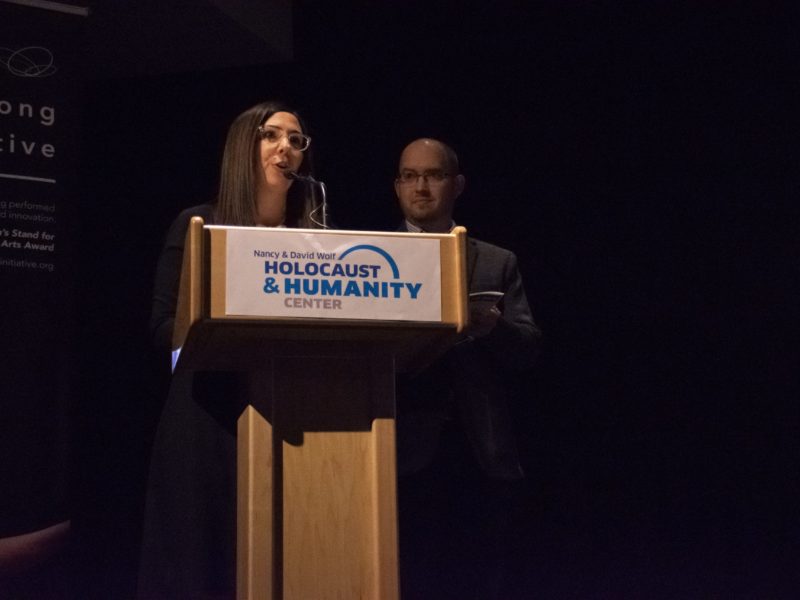 Along with other Jewish advocacy and education organizations across Ohio, the Jewish Community Relations Council commends state leadership in creating the Ohio Holocaust and Genocide Memorial and Education Commission. Recent disheartening statistics have shown us that younger generations in the United States lack basic knowledge of Holocaust and Nazi atrocities. In addition, with misinformation online and increasing levels of violent extremism, we are committed to advancing the lessons of the Holocaust and other genocides in order to inspire action today. Below is a news release from The Nancy & David Wolf Holocaust & Humanity Center about the commission. They were integral in advocating for this legislation. We are proud to partner with them on initiatives to educate on this issue. –Jackie

The Nancy & David Wolf Holocaust & Humanity Center is proud to support the creation of the Ohio Holocaust and Genocide Memorial and Education Commission by state legislators.

In early December, the Senate unanimously passed Senate Bill 372, sponsored by State Senator Michael Rulli (R-Salem), creating the Holocaust and Genocide Memorial and Education Commission to help cultivate knowledge and understanding of one of the most tragic occurrences in the world’s history. The Ohio House of Representatives also passed the bill in a 77-7 vote, and it has now been signed by Ohio Gov. Mike DeWine.

“As the only Holocaust museum in the state with more than 20 years of experience in Holocaust education, the Nancy & David Wolf Holocaust & Humanity Center stands ready to partner and support the Ohio Holocaust & Genocide Education and Memorial Commission,” said Sarah L. Weiss, the chief executive officer of the Nancy & David Wolf Holocaust & Humanity Center. “We look forward to working with the Commission to ensure that every Ohioan learns from the lessons of one of the darkest chapters of human history.”

The Holocaust & Humanity Center is strategically positioned to lead on Holocaust and genocide education in the state. The Center reaches more than 200,000 individuals every year through museum visits, hundreds of digital programs, educational trainings, and student activities.

Jackie Congedo, director of the Jewish Community Relations Council, part of the Jewish Federation of Cincinnati, said JCRC looks forward to working with the Holocaust & Humanity Center as its team continues to lead in its efforts to educate Ohioans on the lessons of the Holocaust.

“I’ve seen firsthand the impact that the Holocaust & Humanity Center has had on tens of thousands of students and teachers within the past year alone,” Congedo said. “HHC’s award-winning museum, expert educational staff, innovative digital programs and training opportunities are invaluable assets for the state’s educators, students, and general public.”

The commission will be comprised of two appointed members from the majority and minority parties from both the Ohio Senate and House of Representatives, eight appointed members by the Governor, the Superintendent of Public Instruction, the Chancellor of Higher Education and the Director of Veterans Services.

“The Holocaust & Humanity Center is an unparalleled leader in Ohio and beyond in educating, training, and commemorating the Holocaust, especially at a time when both knowledge of the Shoah and misappropriation of it are at a crisis point,” said Howie Beigelman, executive director of Ohio Jewish Communities. “Their vision helped to establish the Commission and they will no doubt be one of the key partners with the Commission in this critical work.”

“We look forward to working with the Commission to ensure that every Ohioan learns from the lessons of one of the darkest chapters of human history.” –Sarah L. Weiss