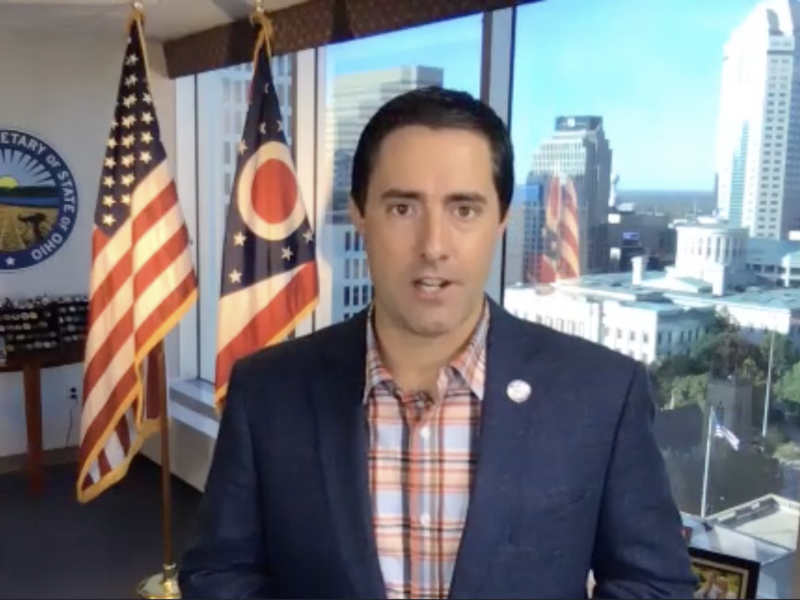 “‘Ready for November.’ That’s been our theme since I came into this office a year and a half ago,” Ohio Secretary of State Frank LaRose told a small group of Jewish media and organizations during a private briefing arranged by Ohio Jewish Communities (OJC), the advocacy voice of Ohio’s Jewish Federations. “Obviously, it took on a new flavor, if you will, in early March, when all of us started to live through a pandemic, and we had to learn how to face some of these new challenges, as it related to running elections.”

In what already would have been a tense and politically charged presidential election, COVID-19’s effects on the way polls operate and how people cast their ballots has heightened the tension and the political charge. LaRose expects forty to fifty percent of all ballots in Ohio to come in early, either by mail or through early voting. In fact, his office sent an absentee ballot request form to every registered voter in Ohio—almost eight million people.

Since 2006, Ohio has offered no-fault absentee voting, meaning any registered Ohio voter can request an absentee ballot, no matter the reason. The voter, however, cannot request a ballot online, nor will they receive a postage-paid envelope to return their ballot—two divisive issues in the Ohio legislature.

OJC has also provided testimony on the still-stalled HB 680 before the Government Oversight Committee in support of several needed changes, such as online voter registration, using CARES Act funding to pay for absentee ballot postage, and line queuing and other technological check-ins to help keep polling places safe. Both JCRC and OJC are funded by the Jewish Federation of Cincinnati.

According to LaRose, his office has the funds to pay for absentee ballot postage, but, he said, “unfortunately, the time for the legislature to take action on those important issues that I have been supporting for a long time is over.” Conservatives on the Controlling Board voted against allowing postage to be paid for this election, arguing LaRose’s office does not have authority to spend money in that manner, and that it should be up to the state legislature to decide.

JCRC asked LaRose if Ohioans can be assured that if they request and mail in a ballot, it will be received and counted. According to LaRose: “Absolutely, one hundred percent, unequivocally, yes.” Ohio has a secure two-step authentication process—both when requesting a ballot and when returning it. Fraud is exceedingly rare, LaRose reported, and voters can track their ballot at voteohio.gov to confirm it has been received.

Much of the logistical focus related to COVID-19 has been to ensure people who want to vote in person are as safe as possible at the polls. LaRose said his office worked with the Centers for Disease Control and the Ohio Board of Elections to create a 48-point checklist. That includes PPE, social distancing, separate doors for entry and exit, and instructions for sanitizing voting booths and machines between users.

Local boards of election typically rely heavily on older adults to staff polling locations, but they are at highest risk of exposure during this pandemic. So LaRose has been working with a variety of organizations to recruit new poll workers, including high school seniors, veterans, nonprofit workers, and corporate employees. “If there is a silver lining to the cloud here,” LaRose said, “it is that this may be the year we recruit a new generation of poll workers.”

Encouraging people to participate in elections is a priority issue for JCRC—and something it considers a Jewish issue. Jews have historically played an active role in the struggle for civil rights, including voter enfranchisement. “It is our duty as Jews to ensure that our community, and our neighbors, have an opportunity to express their voice through voting,” said JCRC Associate Director Justin Kirschner. “More so, we have a responsibility to play an active role in choosing our leaders and shaping our democracy, which is based in Jewish teachings.”

The last day to register to vote in Ohio is October 5; absentee and early voting begin on October 6. JCRC is actively encouraging voter registration and early voting, and in October, it is hosting an election forum with candidates from Ohio’s first and second districts of Congress, in partnership with AJC Cincinnati. The JCRC has also worked with a wide range of non-partisan, diverse community partners to develop an online, one-stop voter resource platform called Safe to Vote at Home. There, voters can check their registration, register to vote, volunteer, get their questions answered, and track their ballot.

Thanks for caring about our community and what we do.
Stay connected: sign up for our newsletter here.