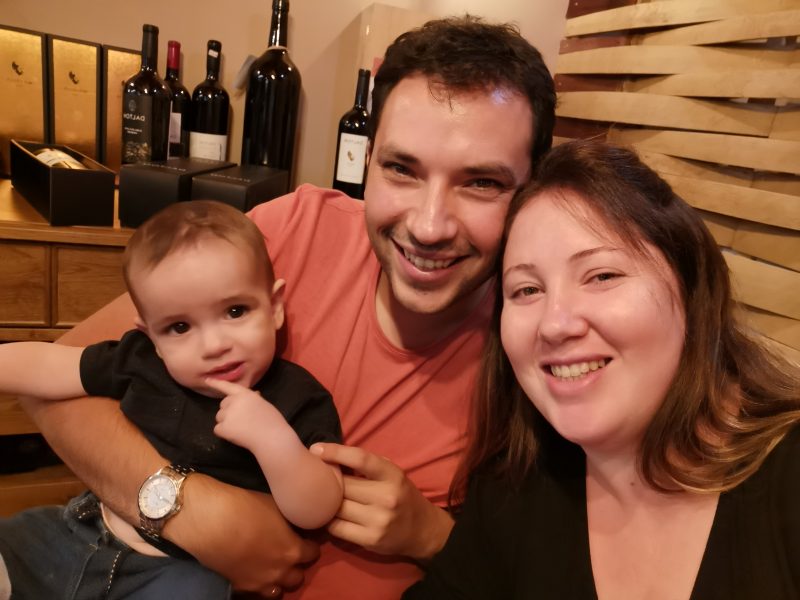 “It’s an amazing opportunity to get to learn more, understand better, and try to help strengthen the ties between the Jewish communities in Israel and in America,” said Yarden Neeman, Cincinnati’s new Shaliach, or Israeli emissary.

As Shaliach, Yarden will work to build and strengthen connections between Cincinnati and Israel through education and advocacy. Working closely with the Cincinnati community’s Jewish and non-Jewish community and civic organizations, schools and universities, and religious institutions, to help bring Israel to life for these groups. “There are big differences between Jews in Israel and Jews in Cincinnati,” Yarden said, “but we’re all one big family in my eyes, the Jewish people. Being able to relocate with my family and trying to get to learn about a different culture is very exciting.”

I spoke to Yarden via Zoom before his arrival in Cincinnati in August. Please enjoy the interview below, which has been edited and condensed for clarity. —Jan Evans, Director of Strategic Impact, Jewish Federation of Cincinnati

Jan Evans: Thank you Yarden for meeting with me. First off, can you share a little bit about yourself for our readers?

Yarden Neeman: Yes, thank you Jan. My name is Yarden Neeman (pronounced Yar-DEN Ne’eh-MAHN) and I live in Israel with my wife Liat, and my two-year-old son Yiftach. I have a BA in sociology and anthropology from Ben Gurion University of the Negev, along with a MBA from the Hebrew University of Jerusalem. I have worked in HR, organizational development, and leadership development.

My wife Liat is a nurse and is currently working on getting her US license so she can work in Cincinnati. Until then, she’s going to help settle us into our new home, take care of Yiftach, and enjoy some well-deserved rest after being a nurse during a global pandemic.

JE: What made you want to apply for this opportunity to be the new Shaliach in Cincinnati? Did you have a background with Jewish nonprofits?

YN: There were a few things that led me to apply. The first was I had been laid off due to COVID-19, and while I was home with my son I had a lot of time to think about the future and I decided I wanted to work for something that was bigger than myself.

Before my career in HR, I had worked at a few NGOs [nonprofit governmental organizations], and during the last year, I thought a lot about how meaningful it was for me to work in an organization that has social impact, and I wanted to get back to that. But, no, I had never had any kind of contact with any of the Jewish Federations. The closest was when I took part in Birthright as an officer in the army, riding the bus with a group of kids from America.

Thanks to that, I have a really good friend that I’ve visited twice in New York. While I was there we attended services in a Reform synagogue, which was really, really different for me as an Israeli citizen—the Reform movement is not very common here. That experience opened a small window to this new world that I’d never been exposed to here in Israel, and I decided to open that window up all the way.

JE: You mentioned you had a background in leadership development, how do you think that experience may help you in your new role as Shaliach?

YN: Leadership development is something I’ve done along the years. When I was in the army, I was an officer in the Officer’s Academy—I helped train new cadets to become officers. In the business world, I helped train leaders on how to build teams and better managers. So no matter if it’s helping train kids in the army, or helping train executives and lay leaders, it’s something that I’m really passionate about. This isn’t a skill that’s necessarily part of the official work of the Shaliach, but it’s a part of me, and it’s something I can definitely contribute.

JE: What are some other things you hope to accomplish or bring to your role as Shaliach?

YN: Generally speaking, I want to strengthen the bonds between Israel and Cincinnati. That’s my main goal—but how will I accomplish that? I go back to my BA in sociology and anthropology—working with different cultures and getting to know different cultures is something that is really interesting for me. I would like to spotlight things that are not political, things like technology and culture—things people can relate to and that does not arouse a conflict. I want to highlight things that are good. I want to show that Israel is not fenced in and can contribute to the world. I want people in Cincinnati to better understand and broaden their horizons about those aspects of Israel.

Of course, I also understand a lot of people have questions about the politics in Israel. I like having those discussions as well, and will certainly answer any questions asked of me, but I really want to try to focus on the topics you won’t necessarily read online or see on the news.

JE: Speaking for the Federation, we are all very excited to welcome you and your family, and can’t wait to see what you’re able to bring to our community.

YN: I can say that we are, as a family, really, really excited to be coming to Cincinnati. When I was there for a week earlier this summer, everyone was so wonderful, welcoming, and helpful. We already feel like it’s going to be a very cozy home for us, a really welcoming community. We’re really thrilled that it’s going to be Cincinnati and not anywhere else in the world. It’s important for me to say that, even after a short period of time being in contact with people from the Federation, it’s made a huge impact on us. Thank you.

“There are big differences between Jews in Israel and Jews in Cincinnati, but we're all one big family in my eyes, the Jewish people.” —Yarden Neeman, Shaliach, or Israeli Emissary