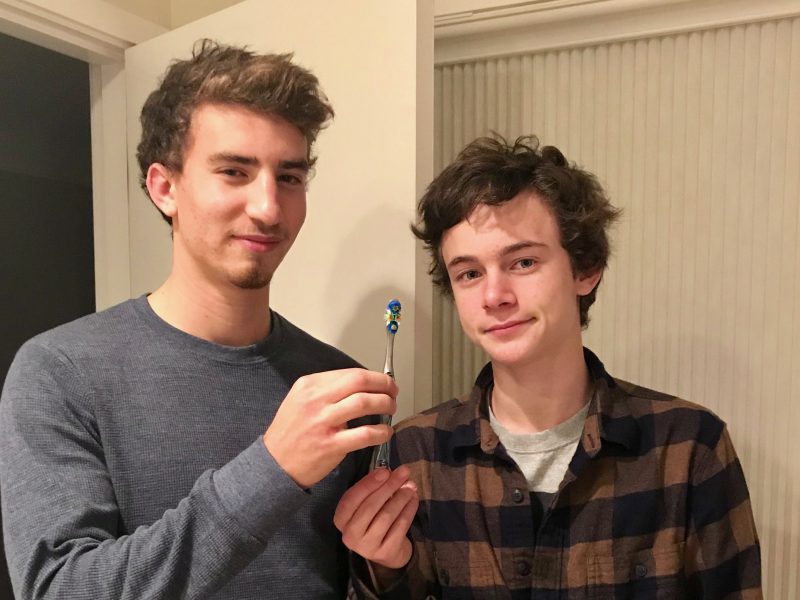 Each September the Jewish Federation of Cincinnati welcomes two new Friends from Israel/Chaverim M’Israel. This year we welcomed Liat Falah and Stav Barkai, who will stay through summer 2018. This is the 14th year of the program, which brings two post-high school teenagers from our partnership city, Netanya, to Cincinnati to share their stories and teach people across the Cincinnati area about Israeli life. This is a Partnership2Gether (P2G) program of the Jewish Federation of Cincinnati.

In late November, the event I had waited for and counted the days on the calendar to had come—The National Shlichim Conference.

Every year all of the shlichim (emissaries) in North America gather together in New York City for four days to teach and learn from each other, share experiences, hang-in (because we are not allowed to hang-out of the hotel), and the best part … to speak some Hebrew!

This was my first time visiting New York, and I can say there is no city in the world like New York. I had the thought that everything is bigger in America, but in New York, it is even bigger! It is simply an amazing city that has everything you would ever want.

At the conference, I met friends from Israel who are also Friends from Israel, or Chaverim M’Israel. It was so much fun to meet other Israeli teens who are living all over the United States and Canada and sharing the same experience.

We had a lot of discussions about the experiences we have had so far. Every one of us has had both peak moments as well as issues, and it was refreshing to be able to talk freely, knowing everyone there understood.

When it was my turn to speak, I took a few seconds to think about all the things I did in the past three months. In that moment, I realized how meaningful and significant my first three months have been.

In the last three months, I have been to eight different states and have visited the cities of Chicago, Milwaukee, Indianapolis, Louisville, Boston, New York, Washington DC, and of course, the Queen City—Cincinnati. I’ve given lectures about Israel in public schools and universities. I have taught more than 100 activities for children, teenagers, and young adults on Israel and leadership. I have attended countless retreats on weekends, working as a counselor for youth movement conventions.

In the past three months, I have won American orienteering competitions, lost basketball games, sprained my thumb, received a speeding ticket (and went to court for it), celebrated my

19th birthday, didn’t cut my hair once, learned how to hold doors for other people like a polite American, and learned when to use my Israeli hutzpah. (Sometimes it actually is necessary!) I spoke in English; I read in English; I dreamed in English; I even snored in English!

I met the Israeli author Eshkol Nevo. I made friends in high schools and universities. I saw the Bengals win a game (believe it or not), and FC Cincinnati lose one. I met the Israeli Ambassador Dani Dayan. I became friends with an actor from the Broadway show Wicked. (Are you jealous yet?) I read five books. I watched three seasons of The Big Bang Theory. I celebrated Halloween for the first time. I drove a car for the first time on Yom Kippur. I’ve eaten more and more turkey at Thanksgiving. I felt at home with my host family, and much more.

But the moment that first came to mind when it was my turn to share and touched me the most (and when I say touched, I literally mean touched), happened my first month in Cincinnati. It was when my host brother, Elliot, and I realized we had been using the same toothbrush for the past month. If someone had taken a picture of our faces at this moment, it would be hilarious.

I have done a lot. And this is just the beginning. I have nine months left, and I’m not going to slow down! (Unless you happen to be a cop, in which case, do not worry. I’m not going to drive too fast—again.)

The Chaverim M’Israel are hosted in homes by community members. The experience of hosting is as enriching for the families as it is for the chaverim. Israel is now a part of each family. And each family shares a son/daughter in Israel. If you want to learn more about hosting an Israeli teen in your home, or to bring the chaverim and their story to you, please contact Sharon Spiegel, Director of Youth Israel Experiences, at sspiegel@jfedcin.org.

"When it was my turn to speak, I took a few seconds to think about all the things I did in the past three months. In that moment, I realized how meaningful and significant my first three months have been.” — Stav Barkai, Friend from Israel/Chaver M’Israel, Jewish Federation of Cincinnati