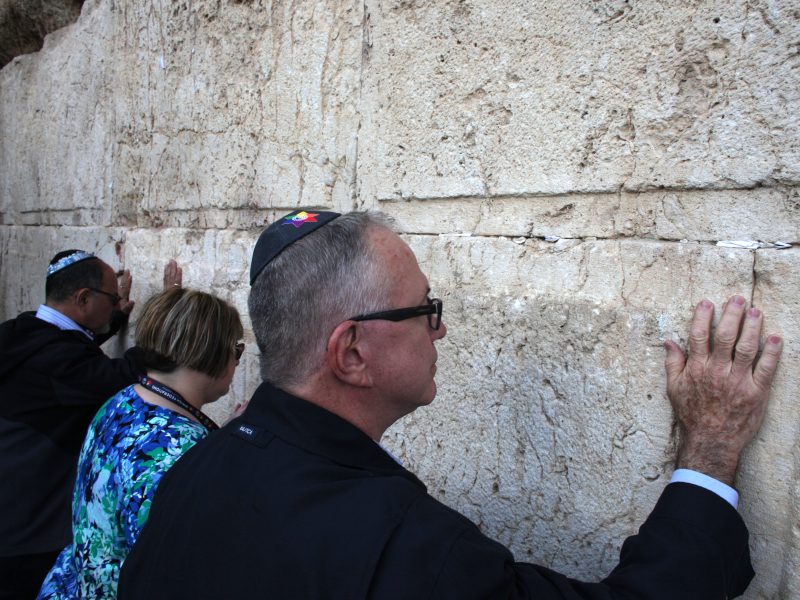 The Jewish Agency for Israel and the Jewish Federations of North America passed a resolution on Jewish religious diversity at the 2017 JFNA General Assembly. In photo, American Jewish members of the LGBTQ community pray at the egalitarian section of the Western Wall (photo by Eyal Warshavsky).
December 14, 2017 | 0 Comments
Tweet
Share2
Share
2 Shares

When people ask me what I do, and what my role is, I tell them I am an emissary sent by the Jewish Agency for Israel and brought here by the Jewish Federation of Cincinnati. It’s that collaboration that helps build bridges between Israeli and American Jews. But collaborating and building bridges are not easy tasks. The freezing of the Kotel agreement and the conversion law can be seen as reasons to drift apart—to disengage or to give up.

One could say: “The Israelis, or the Israeli government, will never recognize us as Jews;” or “Israel doesn’t accept me, so why should I care about Israel?”

I’m so proud to serve the Jewish Federation of Cincinnati and the Jewish Agency, who have decided to commit to bringing the change, and fight for Jewish pluralism in Israel, together. The organizations are taking steps to promote religious diversity in Israel, including passing the following resolution at the recent Jewish Federations of North America General Assembly in Los Angeles. —Maia

Whereas, The Jewish Federations of North America view, with the highest priority, the preservation of the unity of the Jewish people; and

Whereas, the centrality of Israel to all Jews is fundamental to our very Peoplehood; and

Whereas, on June 25, 2017 the Government of Israel suspended its resolution to implement the Kotel agreement reached with the Jewish Agency, the Religious Streams, Jewish Federations, the Rabbi of the Western Wall and the Prime Minister’s Office, which would have ensured that the Kotel remain a unifying symbol for Jews around the world fulfilling the vision of “One Wall for One People” and the Government also sought to advance a conversion bill that would grant a formal and permanent monopoly on conversions in Israel to the Chief Rabbinate, which could take steps that permanently exclude hundreds of thousands of Israelis and other potential new immigrants from being considered part of the Jewish people; and

Whereas, these decisions create divides between the North American Jewish community and Israel and could undermine the Zionist vision and the State of Israel’s sacred role as a national home for the entire Jewish people; and

Therefore, be it resolved that

The Jewish Federations fully endorse the June 26, 2017 resolution of the Jewish Agency’s Board of Governors (Exhibit A) which calls upon the Government of Israel to reverse its decision freezing the previously agreed to resolution on the Kotel and take all necessary action to ensure that these divisive and damaging steps, including those with regard to conversion, are halted; and

We will work with the Jewish Agency and other partners on an action plan to preserve the unity of the Jewish people; and actively oppose such measures; and

We urge the leaders of Israel to fully appreciate the strength of feeling on this matter, and its detrimental effect on Jewish unity and world Jewry relations.

Whereas the Jewish Agency for Israel, representing world Jewry through its constituent members, the World Zionist Organization, The Jewish Federations of North America/United Israel Appeal and Keren Hayesod, is gathered in Jerusalem to celebrate the 50th anniversary of the reunification of Jerusalem, the liberation of the Western Wall and the founding of the Zionist movement in Basel 120 years ago; and

Whereas the Jewish Agency for Israel throughout its history has been the organization responsible for bringing olim to the State of Israel and connecting Israel and world Jewry; and

Whereas the proposed conversion bill that would cement the Chief Rabbinate’s monopoly on conversion has the devastating potential to permanently exclude hundreds of thousands of Israelis from being a part of the Jewish people; and

Whereas we deplore yesterday’s decision by Government of Israel which contradicts the agreement reached with the Jewish Agency and other parties to establish the Kotel as a unifying symbol for Jews around the world, as stated: ‘ONE WALL FOR ONE PEOPLE’; and

Whereas the Government of Israel’s decisions have a deep potential to divide the Jewish people and to undermine the Zionist vision and dream of Herzl, Ben-Gurion, and Jabotinsky to establish Israel as a national home for the entire Jewish people; and

Whereas we declare that we cannot and must not allow this to happen and we are committed to mobilizing our constituencies for their continued support of the people and state of Israel;

Therefore, be it resolved that

– We call upon each Member of the Knesset and all elected public officials to take all necessary action to ensure that these dangerous and damaging steps are halted; and

– We will continue to build a broad coalition of Israelis, together with partners from around the world, who care passionately about keeping our people united and who are committed to the unity of the Jewish people; and

– We call upon the Government of Israel to understand the gravity of its steps and reverse its course of action accordingly.

Natan Sharansky
Chair of the Executive

Charles Horowitz Ratner
Chair of the Board

Michael Siegal
Chair Elect of the Board

Follow Maia Morag on Facebook,  read her bio, or find out more about our Israeli emissaries to Cincinnati.

Thanks to you, Maia Morag is in Cincinnati making connections and expanding awareness of everything Israeli.

“I’m so proud to serve the Jewish Federation of Cincinnati and the Jewish Agency, who have decided to commit to bringing the change, and fight for Jewish pluralism in Israel, together.” —Maia Morag