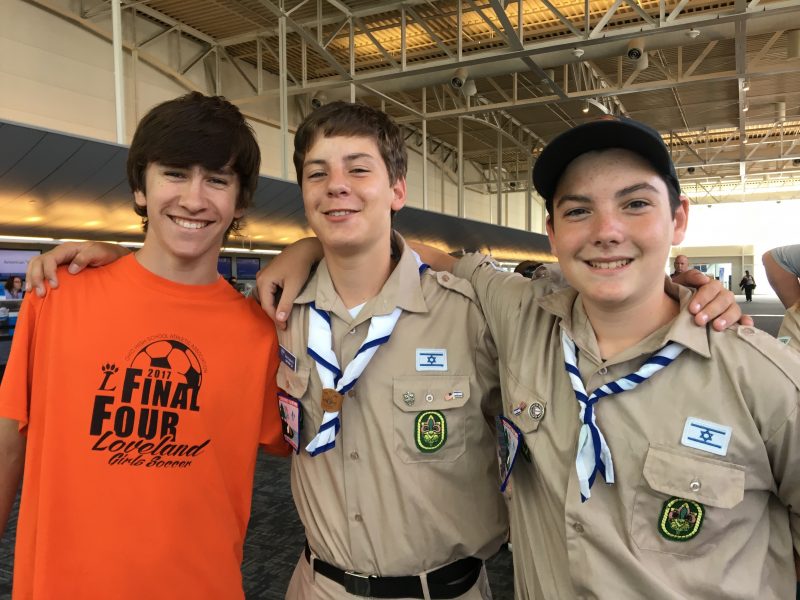 Linda Callahan and her family have hosted Israeli scouts attending Camp Friedlander each of the last four summers. Her son, Aiden, is pictured here with the scouts who stayed with them this year, Ben and Jorge.
July 18, 2018 | 0 Comments
Tweet
Share30
Share
30 Shares

“Do you play Fortnite?”

Ben and Jorge knew they would fit right in. They had just arrived at the Callahans’ house after spending two weeks at Camp Friedlander, a Boy Scouts camp in Loveland. They were able to attend with six other Tzofim Israeli Scouts through a Partnership2Gether (P2G) program of the Jewish Federation of Cincinnati. They were getting to know the family that would host them for a few days before returning to Israel.

It turned out Aiden is an avid player of the popular web-based video game Fortnite, in which players work together to complete a mission. In this he is like many boys his age in the United States—and, as he quickly found out, Israel.

Linda and Dave Callahan have hosted Tzofim, including Ben’s older brother, each of the past four summers, something they started doing because they wanted their son to have a connection to kids in Israel.

“We love the relationships that he forms and how that enhances his Jewish identity,” Linda said.

Those relationships have been formed over the hours of playing ping-pong, air hockey, and video games in their basement. And it’s created lasting relationships.

Aiden is already planning a reunion in Israel next summer. He’s going on a trip using his Israel travel grant from Cincy Journeys and wants to extend his stay for a few days to visit Ben and his twin brother Gil, who was also in this year’s Tzofim delegation, in Netanya. Linda has already been emailing their mom to arrange details.

It’s not just her son who benefits from the experience.

“My husband and I enjoy the social aspect of spending time with other host families and the ability to be of service and provide a safe and fun space for the scouts,” she said. “And we have developed relationships and connections to the boys and their parents.”

The first scout her family hosted, Omer in 2015, stole her heart. Even today, they keep in contact over Facebook, and she refers to him as her “Israeli son.” About a month later, Linda and her family visited Israel in celebration of Aiden’s bar mitzvah, a trip that was in the planning stages while Omer was in Cincinnati.

“We were the only host family who at the Cincinnati airport wasn’t saying ‘goodbye,’ just ‘see you later,’” she said. “It was glorious.”

“Because of the personal connections with these families, our trip was much more meaningful,” said Linda. Interactions like these are why the Jewish Federation and its P2G program bring the Tzofim to Camp Friedlander each summer, funded by the Federation’s Annual Campaign. P2G builds bridges between Cincinnati and Netanya through people-to-people connections.

“One of the benefits of this particular delegation is that the eighth graders from Israel create personal connections, as well as strong and lasting bonds, with their host families from Congregation Beth Adam, who are Jewish, and with Boy Scouts at camp, most of whom are not,” said Alan Brown, P2G committee member and project champion.

“Children are children, no matter where they are from,” Linda said. “They all like video games and playing together. For American and Israeli children to get to know each other personally, spend time together, and see how they are similar, is the best thing we can do to make the world a better and more tolerant, empathetic place.”

“For American and Israeli children to get to know each other personally, spend time together, and see how they are similar, is the best thing we can do to make the world a better and more tolerant, empathetic place.” —Linda Callahan