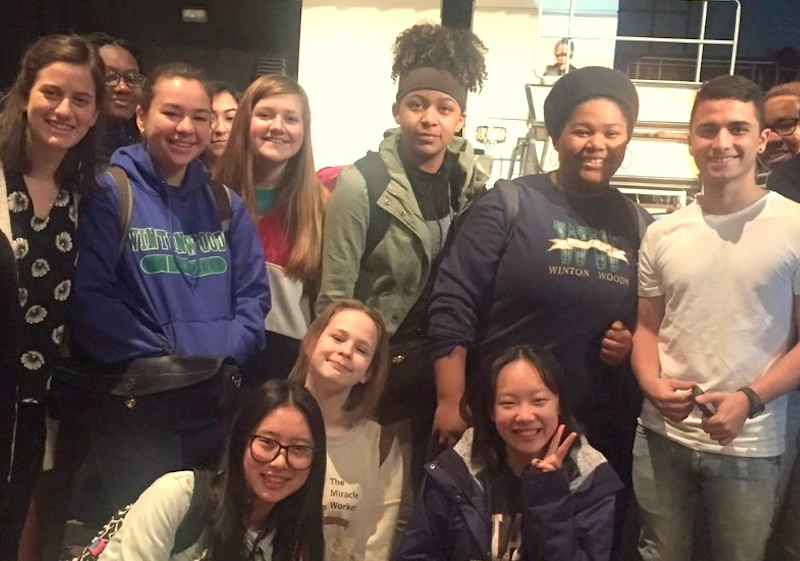 Alon Peretz (standing, white shirt) with students from the Academy of Global Studies at Winton Woods High School, who gave him a standing ovation for his love of country. Hadas Silver is also in the photo (standing, second from left).
March 17, 2017 | 0 Comments
Tweet
Share32
Share
32 Shares

Each September the Jewish Federation of Cincinnati welcomes two new Friends from Israel/ Chaverim M’Israel.  This year we welcomed Alon Peretz and Hadas Silver, who will stay through summer 2017. This is the 13th year of the Friends from Israel/ Chaverim M’Israel program, which brings two post-high-school teenagers from our partner city, Netanya, to Cincinnati to share their stories, and teach people across the Cincinnati area about Israeli life. The Chaverim program is a program of Partnership2Gether (P2G) of the Jewish Federation of Cincinnati. To bring the chaverim and their story to you, please contact Sharon Spiegel, Program Director, at sspiegel@jfedcin.org.

So, it was February 16, the day of my flight back to Israel. Finally, after six months I was going home! To see my friends, my family!

It was amazing to see everyone and to sleep in my room again, but it was also hard because everything has changed. My friends are not high school kids anymore. They are still my friends that I grew up with and I still love them like my own brothers, but they are IDF (Israel Defense Forces) soldiers now. We used to play with water guns and suddenly they have real guns.

But today I want to talk about coming back to another home, Cincinnati, the place I have been calling home for the past six months.

To be honest I thought it would be really hard to come back to Cincinnati after two weeks in Israel, but it wasn’t. The Jewish community here has always accepted me like I was accepted in Israel, with a lot of love. Going back to the Hebrew school, seeing the kids again and hearing them say how much they missed me was amazing. I missed them, too.

I feel like I belong and that’s the best feeling you can have.

I would like to share a story with you about something that happened four days after coming back, because a lot of times we as people take stuff in our life for granted. In my case, it was living in Israel, being Jewish, going into the IDF.

As part of the Chaverim M’Israel program we go to public schools to talk with students about Israel. But not as teachers. We come as friends because that’s what Chaverim M’Israel means—“Friends from Israel.” We give a presentation about our life in Israel starting with our life as kids all the way to our current lives, standing in front of them. As always, at the end we share that our next step and future jobs are in the IDF.

So, I was standing in front of 300 kids, maybe the first Israeli they have ever seen and probably the only Jewish person, too. I told them that in November I will start my IDF service and that I’ll be in a combat unit because I’m proud to give back to the country that gave me so much. I said how special Israel is to me, deep in my heart, and hoped they understood.

Suddenly they stood up and started clapping. I’m going to do something that every 18-year-old does in Israel, but in that moment, I felt special. I felt appreciated for something that I take for granted, since I remember myself always thinking about my future in the IDF. I’m grateful to those kids because I learned that we all take a lot for granted.

So, my outcome is that I take a second to think of stuff that I’m grateful for in my life, like living in Israel, being here in Cincinnati, going into the IDF.

So, what I’m trying to say to you, lovely people that are reading this, take a moment to think of things in your life that you take for granted. Doing what I do every morning, here in Cincinnati or in Israel, this is what gives me energy every day.

“Suddenly they stood up and started clapping. I’m going to do something that every 18-year-old does in Israel, but in that moment, I felt special.” —Alon Peretz, Friend from Israel/Chaver M’Israel, Jewish Federation of Cincinnati