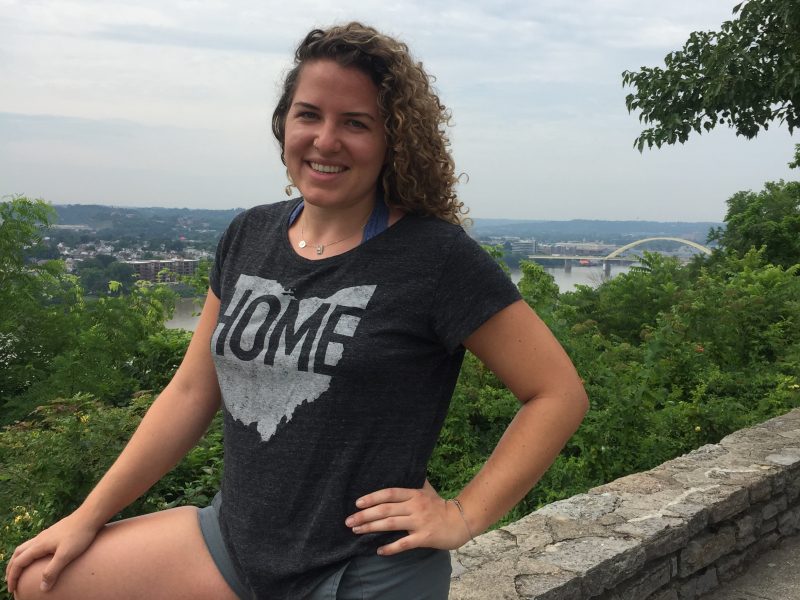 I’m excited to announce a new Federation initiative that will help develop person-to-person connections with our partnership city, Netanya. Cincinnati will be the first city to send an emissary to Israel for a year, through the Cincinnati Fellow in Israel (Cincy Fellow) program. It’s a reciprocal program to Chaverim m’Israel (Friends from Israel), in which two post-high school Israeli teens share their stories and teach people across Cincinnati about Israeli life. It’s exciting to be part of this groundbreaking program as we continue to advocate for religious pluralism in Israel. —Shep

“I want to create relationships. If I impact one person’s life while I’m there, I will know I did my job.”

Meet Brianna Pecsok—a 25-year-old Wyoming High School grad, who studied International Relations and Hebrew and Nonprofit Studies at The Ohio State University. She was selected by the Jewish Federation of Cincinnati’s Partnership2Gether (P2G) Committee as its first Cincinnati Fellow in Israel (Cincy Fellow), an American emissary who will spend a year in Israel teaching people about life, culture, and Judaism in the United States.

The idea of a cross-cultural exchange is not new. American Jewish Federations have been inviting Israeli shlichim (emissaries) to spend a year or more living in their communities, educating and exciting Jewish and non-Jewish people about Israel, for years. For the last 13 years, the Jewish Federation of Cincinnati has hosted two post-high school Israeli teens from Netanya, Cincinnati’s partnership city, as part of its Chaverim m’Israel (Friends from Israel) Program. Thousands of people have had the opportunity to learn about life in Israel—its culture, heritage, and history—and make people-to-people connections with Israelis.

Until now, however, no Federation has ever sent an American emissary to its partnership city in Israel to do outreach and education for a year.

“Cincinnati is the first city to do the reverse,” said Federation CEO Shep Englander. “We have seen in our own community how impactful developing real, meaningful relationships between Israelis and Americans has been. It’s exciting to be part of this groundbreaking program that will bring that personal connection to those living in our partnership city of Netanya.”

Brianna’s involvement will be a hybrid of two programs. She will be part of the Israel Teaching Fellows (ITF) MASA program and also do programming through P2G in Netanya. She will live in an apartment building with the other ITF fellows and work with English classes at a junior high school four days a week. It is in those classes that Brianna will do most of her education and outreach.

“I want to use the American holiday calendar as the basis for my lessons,” Brianna said. “On the surface, it’s a good entry point to teach Israelis about our unique cultural differences. To go deeper, though, I will include really meaningful lessons, including the history of why we mark each occasion through a Jewish lens. For instance, Martin Luther King, Jr. Day should be a poignant lesson on the intersection of Judaism and civil rights.”

While many children at the school where she will teach in Israel speak some English, Brianna knows language could be a barrier. For the first six weeks, she will take intensive Hebrew Ulpan classes, and she hopes to come back speaking fluently.

Outside of the classroom, Brianna will volunteer with youth groups, scouts, and a young professionals group (HaGag), teaching American culture and bringing life as a Jew in the diaspora alive to Israelis.

“I’m looking forward to interacting with young professionals through HaGag,” she said. “I can talk candidly to them about college life and being a young, Jewish adult in the United States since that’s where I am right now.”

The Cincy Fellow and Chaverim m’Israel programs are made possible by the Jewish Federation of Cincinnati and the Jewish Agency for Israel’s P2G program, a global platform that builds bridges among communities in Israel and the United States by sharing ideas, strengths, and challenges, and by empowering both communities to generate waves of change. Local P2G leaders say it’s critical to make these people-to-people connections.

“Israelis need to understand American Jewry, just as we find it important to connect with Israel,” said P2G cochair Scott Joseph. “Considering recent events, it is imperative that Israelis understand that we are all Jews and connected by a common ancestry and culture. This message has been abundantly clear when Israelis come to Cincinnati, and we hope Brianna will bring this message to Netanya.”

“The Federation has directed part of the its Annual Campaign toward innovative grassroots programs in Israel that are affecting change in the area of religious freedom in Israel,” said Barb Miller, the Federation’s Director of Community Building. “This includes programs that address issues like freedom of marriage, conversion laws, diverse Jewish identities, and support of the Reform and Conservative movements in Israel. Now, by sending Brianna to Netanya, we can expose many young Israelis to fun activities while creating a new awareness of how young American Jews practice their Judaism in America and, more specifically, in Cincinnati.”

This will be Brianna’s fourth trip to Israel. She first traveled to Poland and Israel during a 2008 Birthright trip; she spent the 2014-2015 New Year in Israel on a Cincy Birthright trip; and she went on the Federation’s 2016 Community and Congregation Mission Trip as a staff member for Adath Israel, where she was the Coordinator of Youth and Family Programs.

“I feel a certain amount of ‘homeness’ when I’m there,” she said. “Everyone is so open. I never plan more than six months in advance, which is very Israeli! I enjoy the creativity and flexibility of life in Israel. Since my first trip, I have wanted to spend as much time there as I could.”

In addition to the more relaxed lifestyle, Brianna is looking forward to spending weekends on the beaches of Netanya; biking around the city; and doing acro-yoga, a form of acrobatic yoga done with a partner. She leaves for Netanya on August 29.

“We know that every time an Israeli comes to the United States, an impact is felt on both sides,” said the Federation’s Director of Youth Israel Experiences, Sharon Spiegel. “Each of the Netanya emissaries and delegates gain a better understanding of American Jewry and Jewish pluralism, then take this knowledge back to Israel. Now we have the opportunity to affect many more people by sending one Cincy Fellow to connect with many more people in Netanya.”

The  Cincinnati Fellow in Israel program is just one of over fifty programs and agencies funded in part by the Jewish Federation of Cincinnati.

Thanks to you and the help of our network of allied agencies, Brianna will be able to bring a Cincinnati-centric Judaism to Netanyans and other Israelis.

“I feel a certain amount of ‘homeness’ when I’m there. Everyone is so open. I never plan more than six months in advance, which is very Israeli! I enjoy the creativity and flexibility of life in Israel. Since my first trip, I have wanted to spend as much time there as I could.” —Brianna Pecsok, Jewish Federation of Cincinnati’s first Cincy Fellow