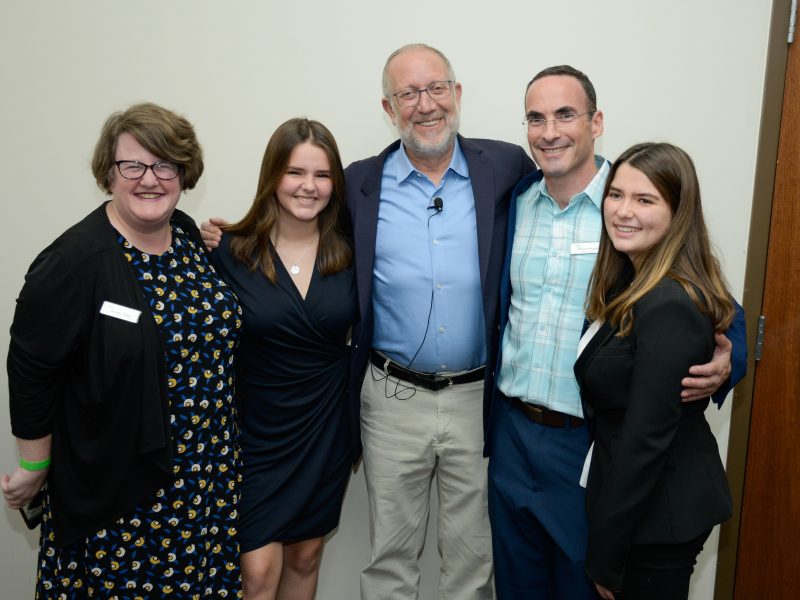 “Over the last couple of years, I have been in so many discussions and talks with people in the Cincinnati community,” remembered Israeli emissary Amnon Maggid. “People really opened up and shared with me what is on their minds.”

Since August of 2018, Amnon has been the community emissary from Israel (shaliach), working to build and strengthen connections between Cincinnati and Israel through education and advocacy. He has worked closely with the Cincinnati community’s Jewish day schools, congregations, and agencies to help bring Israel to life for these groups. His main goal was to help facilitate open and honest conversations about Israel—a sometimes difficult topic, even within the Jewish community.

According to Amnon, one of the benefits of the emissary program is being able to interact with a “real person” from Israel. Often Americans, including Jews, form their perspective on Israel from what they see in the news and on television. Face-to-face conversations with an Israeli, however, start to reveal the nuances and complexity of daily life in Israel—and flesh out Americans’ understanding of the country.

“My mission was to help bring people together,” Amnon said. “When people don’t talk about Israel, they are often not talking about other aspects of their Judaism. I really wanted to jump start those conversations and talk with people who may not come to an event hosted by the Jewish Federation.”

Amnon put his passion for Israel to work by helping the Cincinnati Jewish community engage not just in regular conversation, but in civil dialogue across differences. “The volatility and divisiveness of the past two years have made this a particularly challenging time to do Israel engagement and advocacy,” said Jewish Federation CEO Shep Englander. “But that didn’t stop Amnon from bringing passion, energy, and insight to his two-year term as Cincinnati’s Israel emissary.”

Amnon said when he first started, the leadership of the Jewish Federation challenged him to find new ways to engage the community. So he created an initiative called We Need to Talk, which “created a space to have a conversation where people can bring their challenges, their thoughts, and questions,” Amnon said. “They can explore their inner beliefs, their relationship with Israel, their relationship with the Jewish community, and what they want for the future of the Jewish community.”

Amnon also helped facilitate a community read of Letters to My Palestinian Neighbor, which was powered by book groups and discussion circles all over the city. It culminated with a presentation from the book’s author, Yossi Klein Halevi, last fall. “I wrote the book for the Jewish community,” Halevi said. “I was hoping to give American Jews a way to discuss Israel amongst themselves. It is so humbling for me to come to a community that adopted my book as a tool for internal Jewish communication.”

Amnon said he hopes the conversations around Israel are just the start. “I wanted to give the community the tools to be able to reach out and engage with one another. Today it’s Israel, but maybe tomorrow they’ll start having open conversations about hard topics facing them here in the US.”

When COVID-19 forced the Federation to work from home and cancel its in-person programming, Amnon was quick to keep people connected by moving Israel engagement to online platforms. Amnon’s success in attracting strong online engagement was recognized nationally.

Amnon is leaving Cincinnati for Chicago, where he will serve as Regional Program Manager, Midwest Region, for the Jewish Agency for Israel. He will be guiding and mentoring shlichim in the Midwest region.

“Amnon’s service as Israel emissary was a blessing for our community,” said immediate past president Gary Greenberg. “His wise and thoughtful advocacy for Israel-diaspora engagement will resonate here for years to come. We will miss him.”

When asked to reflect on his time in Cincinnati, Amnon pointed not to one big achievement, but the small, quiet moments he had during conversations with community members. “The moments that really inspired me and gave me a true sense of achievement were the moments people were willing to step aside from their own beliefs and put themselves in a new mindset. Those moments were true and genuine, and I felt honored to be part of it.”

“Amnon has been an amazing addition to our community,” said Marcie Bachrach, who was Vice President of Israel & Overseas during Amnon’s tenure as emissary. “He has connected with countless Cincinnatians, including youth and adults, Jews and non-Jews, and the engaged and unengaged. He has inspired us to have difficult conversations and broaden our perspectives. Amnon has enriched our community with his knowledge, strategic thinking, creativity, and passion.”

When asked what he hoped his mark on the community would be, Amnon said he hoped he taught the community and professional leaders to bring their most authentic selves to the table when having hard conversations, “along with the sense that Israel is something that can build our community and bring it together, instead of tearing it apart.”

Amnon said he also now has a deeper sense of what Israel is and means to those in the diaspora. “It’s not just a state. It’s a sense of belonging, something that unifies Jews all around the world. I truly now understand how important it is to fight to make sure Israel, the state, can be a better one so all Jews can feel a part of it.”

“The time I spent here was incredible,” Amnon reflected. “I grew so much as a person. I found myself working on things that I never imagined I’d be able to do. I learned how to create real partnerships, to be patient, to be willing to listen, to find the right way to be helpful.” He pauses for a moment, blinking back tears, “And for that I’m very thankful.”

“As long as you care about the future, we have a common ground. We need to look at our differences, and not be afraid of them.” —Amnon Maggid, Community Emissary from Israel